In 2007 Microsofts exclusive game Crackdown pinged on our gaming radar, promising all manner of chaos within Pacific City. You got to play a genetically-enhanced agent whose mission was to keep the citys streets clear of scum. Despite a lot of destruction within Pacific City, it didnt exactly set our world on fire.

This sequel then, promised more of the same but, you know, more of it. Its still set in Pacific City, but its now ten years on. There are gangs everywhere you turn, and the place has more freaks than the Jeremy Kyle show.

You play a new breed of agent; now even stronger and faster. Hes a cross between being bionic and a Robocop. You get a vehicle to drive and a gun to shoot, all within the confines of a sandboxed city.

Now many have criticized the game for being far too similar to the original, stating that its more Crackdown 1.5 rather than a proper sequel. However, as we never played the original, except a wee dabble with the demo, were focusing simply on what the sequel has to offer. 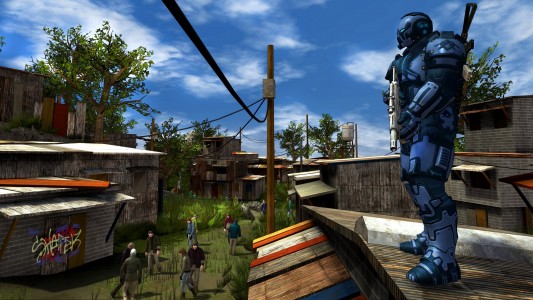 Boy, when they said that they were stepping up security at Glasto they weren't kiddin'.

Sadly, after only a short period of playing it, we found ourselves overwhelmingly disappointed. Back in 2007, the games premise was probably a promising one. But due to the incredible pace of technology, increasingly game years are becoming more like dog years; one game year is the equivalent of seven human ones. Since then, games of a similar style have been and gone (Prototype and inFamous for example) that have pushed that particular bar way up high. Both allowed you to play characters with incredible strength and powers that meant that you could quickly take command of the most unruly of situations.

Crackdown 2 has somehow found itself left behind. For instance, theres nothing personable about the character you play. He has no back story, no emotional connection to either plot or player, and is completely devoid of any personality. He is merely a grunt in a shiny suit.

These things can be looked over if the gameplay rocks. It doesnt. Not even a slight sway going on. Making your way through Pacific City feels all rather dated. After beating up a few deadbeat gang members, we decided to get on with the mission at hand. We were handed the task of regaining control of three absorption units, which were now under the control of gangs. After taking all three out, we then had to proceed to a drop point for a beacon, which when activated, would help wipe out the citys mutant problem.

We were cheered by our success, and were looking forward to our next mission. We were then handed the task of regaining control of three absorption units...We complied. But when we were faced with doing the same thing for a third time, we put our controllers down, because our eyes were in such despair that they were threatening to pop out and hide themselves under our pillows. Whats with all this mundane repetition Crackdown 2? Huh? What do you have to say for yourself?

Of course theres more to it than that. Just not much more. If youre a sucker for collecting a million orbs, this could be your new favourite game. You can also take over gang strangleholds. You may well have to do more than that, but quite frankly, at this point, even we felt that life was too short to carry on playing.

We were even embarrassed by the physics of it all. Your agent is supposed to be this all-singing, all dancing (if only) entity, and yet time and again we struggled to get him to climb the building in front of him. He was constantly banging his head against a ledge or some other obstacle, just as we were banging ours against our console wishing it all to stop.

Trying to shoot with multiple targets in front of us also seemed oddly problematic. There are barrels of explosives all over the place (not sure how they got past health &38; safety, but there you go) which are crying out to be shot at. However, if you are auto targeting some enemies, you have to go to manual targeting to shoot the barrels. This soon became tiresome and fiddly so we just gave up on doing it.

Surprisingly we had more success going online with the game. With part of the city at your disposal, you simply had to shoot as many as your opponents as possible. At times it felt like a good old-fashioned shoot-out in a Quake-ish arena. It was fast, furious and more importantly, fun. Sadly we couldnt use any nice words beginning with f to describe the single player mode.

Maybe Crackdown 2 would have impressed on some level in 2008, but in the space year of 2010 it is nothing short of mediocre. Gamers dont only expect more, they deserve more.