Thank God for wide spread crime. Let’s face it, if our streets weren’t teeming in criminals, doing a whole lot of stuff they shouldn’t be, the video game industry would be forced to make The Great British Bake Off games, with a fishing sub game, natch.

With the launch of this third iteration, Crackdown finally becomes a franchise. It’s taken its sweet time getting to this point however; the first game was released in 2007 for the Xbox 360, with its sequel rolling up in 2010. Nearly a decade later and the series finally arrives on the current gen. It was supposed to be out in 2017, but wasn’t ready. The question is, was it worth the wait?

The game takes place on the island of New Providence, which has been taken over by various criminal syndicates. They’re making life a right old pain for everyone, and being complete fun sponges quite frankly. I know what you're thinking and its true - my ass does look big in this.

But wait, The Agency is still alive and kicking, and is prepared to stand up to these bullies, with the mighty force of Agents – which means you.

You have guns, and the power to jump, well, quite high, to help in your mission to rid the city of crime. There are power stations to blow up, propaganda towers to climb, citizens to rescue, etc – you know, the usual drill. Do it a lot and you get bigger guns. Do it enough and you can slowly regain control of the city, hoorah!

When the first game was released, its open world and sandbox dynamics were all sparkly and new. That was 2007 for you. Now, in the space age 2019, this new version immediately looks tired on release.

It’s as if the Just Cause franchise snuggled up with Agents of Mayhem for a little Netflix and chill, things got a little out of hand, as they so often do, and the result is this.

To that end, it is unremarkable in every conceivable way possible. Everything it does has been done before, better. For instance, Rico from Just Cause has his grappling hook hand that allows him to do various cool things. Here, the big draw is jumping; like Mario’s double jump high. We would have been more impressed with a bionic sneeze.

It doesn’t help that controlling your character can be skittish at times. During some of the more advanced tower sections for instance, where you literally just have to get to the top to flick a switch, you need the kind of precision that only remote drone pilots train for years to attain. If you’re lucky, you can grab hold onto the edge of a platform to pull yourself up, only to find you need to jump again because of a curious obstacle in your way, and if you don’t manage it, you plummet, all the way down. It was only during these sections of the game that we noticed it actually had a day to night cycle, as seeing the edge of the platforms grew more problematic in the darkness. Yep, we re-played them that much. 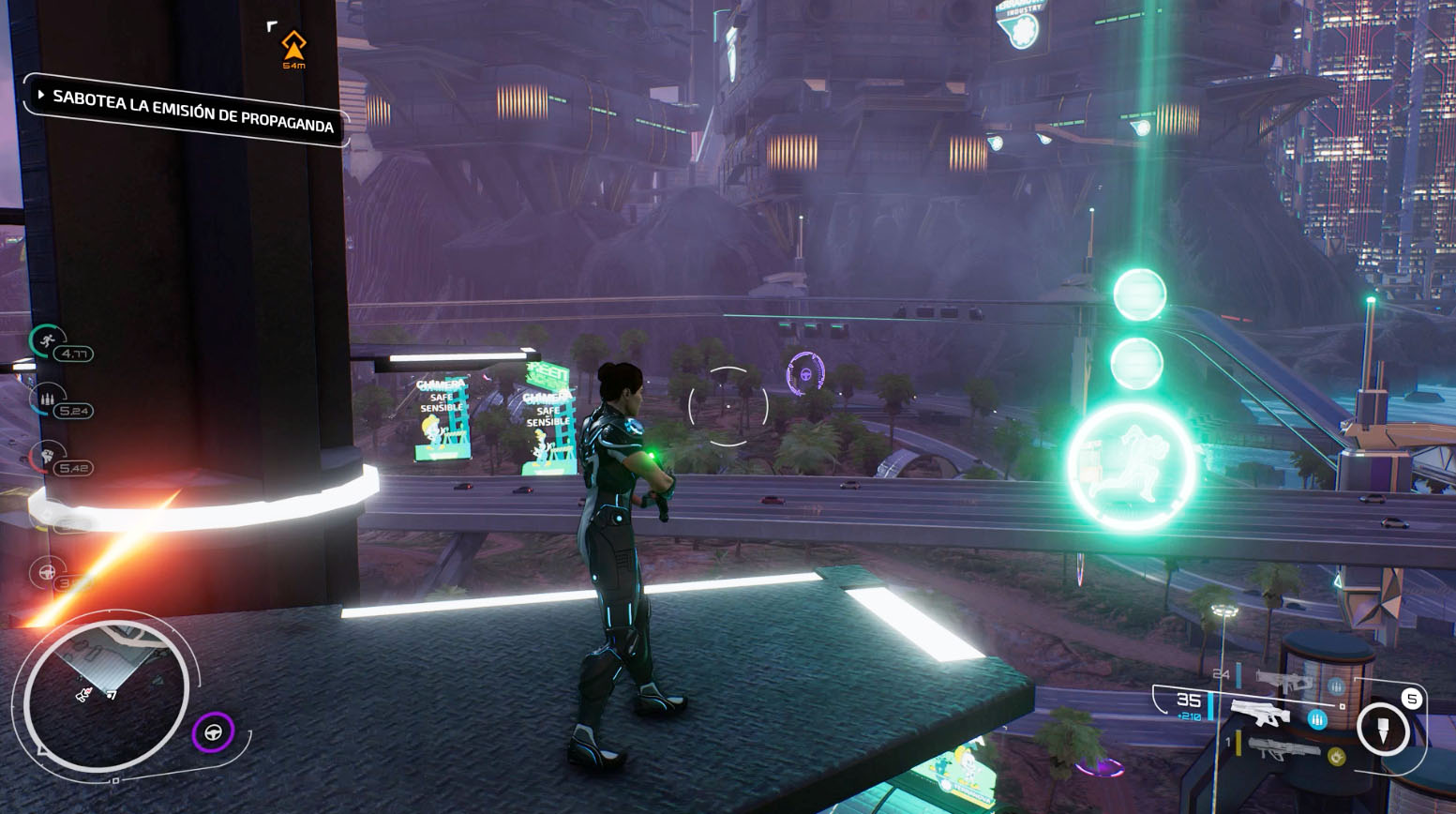 When we were give review code, it was split in two halves, with the campaign and multiplayer downloaded separately. We were surprised and alarmed that the whole campaign was just under 15GB. Considering that you pretty much have to connect several consoles together these days just to download one AAA title, they devote that amount of space to just their opening sequence.

But here’s the thing, Crackdown 3 is not a AAA title. In fact, it’s a major miracle that the studio managed to produce the game with so little at their disposal, and that is commendable.

And despite all its flaws, we couldn’t help but play it – a lot. It’s standard collect stuff, shoot stuff, defeat baddie, repeat. And yet we were drawn in by its minor charms; every time you turn around, there’s another damn orb to collect, and despite yourself, you have to go get it.

You can play it co-op, which would probably only enhance matters, as well as multiplayer, which is OK for short blasts, but really has little depth to it.

It’s probably the closest you’ll ever get to playing RoboCop in a game, without actually playing him.

It does make you wonder though, how much better the game could have been, if the cash they splashed out on actor Terry Crews to promote and appear in the game was used to improve what they already had. Crackdown 3 could’ve truly soared, as opposed to a lot of double jumping.