Crash Bandicoot: It's About Time

If ever the weight of burden from being a console mascot hung heavy on a character it’s Crash Bandicoot.

He was created by Naughty Dog in 1996 for the original PlayStation, as a way of both promoting the brand, as well as competing with Sega’s blue hedgehog and Nintendo’s Italian plumber.

But the limelight didn’t really suit Crash. In fact, he found himself being swallowed by the shadow of obscurity with every success made by Sonic and Mario.

He got some respite in 2000 when his exclusivity to Sony expired, becoming a free agent, enabling to express himself across other platforms. But what ended up happening was that he was outrageously abused for ten years from 2000, being licensed for around 14 different games, in various genres, to varying degrees of quality, which ultimately ended up with everyone just sick to death of Crash.

He was down, but not quite out. In 2017 his N.Sane Trilogy was released, which was a compilation of his first three games remastered. Not only did it sell over $10 million copies, it served as a reminder that maybe, just maybe, there was life in the old bandicoot yet.

The comeback trail begins with this then, the first original Crash Bandicoot title in over 20 years. 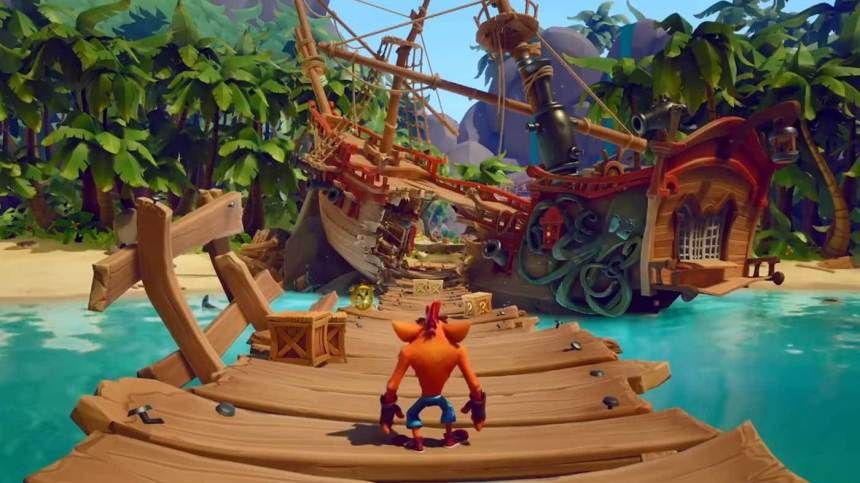 That beach looks nice. If only I could pop my feet up and enjoy a Moscow Mule...

The first obstacle that’s quite challenging in the game isn’t a tricky section of a level, but the game’s story itself. It’s a hideously dense plot that involves baddies causing rifts in time, with Crash and his fellow team left to travel though them to clean the mess up. It’s unclear why it’s so terribly convoluted when it has no real bearing in the game, which ultimately sees Crash having to complete various platform levels.

They begin with the traditional Crash Bandicoot formula of travelling a linear path into the screen, where he breaks as many crates as he can, collects Wumpa fruits and dismisses enemies. There are a few save points along the way, which certainly help get you that little bit closer to the end of the level.

So far, so Bandicoot.

As you progress however, the game changes the mechanics at various points, just to keep things interesting. For instance, there are levels that change back and forth from travelling into the screen to side-on platformer, and back again.

There are some bonus levels too, that appear as if they are recorded on grubby videotape, with you having to traverse from left to right bouncing off of various crates to make it to the end. Again these levels change the pace of the game, as well as give it a pleasing retro feel.

On top of that you also have to take control of non-stop vehicles in some sections, as well as control the odd super-power, such as a whirlwind jump technique, and the ability to make sections disappear and reappear in order to get to your destination. 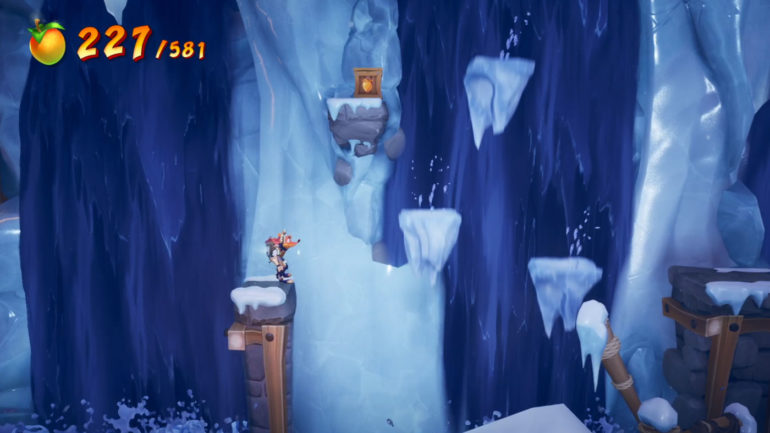 It really sucks when the lift doesn't work.

If you have played a game like Mario, for instance, with the plumber in classic platform mode, then you should have a relatively solid grip on this game. Just. With the change in perspective however, particularly with going into the screen, judging where you are to land can be tricky. The developers were clearly aware of this, as they have included a shadow circle to appear to guide you where your landing space is. In doing so, it does feel a little like an admission of guilt on their part, where they are basically fessing up to making it a wee bit too challenging in places.

The game mechanic is frantic and frenetic in tone. Once you start a level, there’s very little time to catch your breath, as you can’t really stop until you complete it. Certainly the deeper you go, the more grateful you become of those checkpoints when you hit them, allowing you to dry both your hands and controller from the heavy sweat you’ve just produced.

Of course every time you miss a moving platform, or get hit by an enemy, you die. This is standard for any platformer, but this one appears to enjoy rubbing the fact that you’re a bit rubbish into your face with fervent glee. It’s here that we realised that Crash wasn’t the platformer for us. The few lives you lose on a level, the more chance there is to gain crystals, which unlock various costumes for you to play through in. Die anything over three times however in a level, and those crystals go bye bye. Where the mocking element comes from is with your death tally being recorded in the right hand corner, acting as a reminder of how bad you’re playing. Cleary when it goes into double figures, you’re in trouble. Imagine our horror during one level when we surpassed 50, with a further 50 attempts looking reachable. This says far more about our sad gaming skills however, than the game itself.

Overall, Crash Bandicoot 4 is a tight and solid platformer, that delivers enough variety to keep the game entertaining, whilst also being charmingly old skool to boot. What comes under a little more scrutiny is Crash Bandicoot as a video game character himself.

For those that bought into him as a mascot in the early days on his outings on the PlayStation, then this will no doubt provide a welcome hit of nostalgia. Crash managed to pass us by in the early years, so we have no affinity with him. And this game certainly doesn’t change that. He’s a curious character, and it feels that developers acknowledge that in various ways. One is with the ability to change his appearance; we can’t remember a game of this kind that offers so many costume swap-outs to make the character more appealing to play as.

Then there’s the ability to not play as Crash at all, where you can play a female character instead throughout the entirety of the campaign.

So whilst the game itself may be a throwback to early gaming, Crash himself seems, we’ll, ironically out of time. He doesn’t feel the real deal, instead feeling almost like a Chinese rip-off of the real deal. And to a certain extent that’s exactly what he is, a character knocked up pretty sharpish by a development team in an attempt to compete with the likes of Mario and Sonic.

In one sense, Crash Bandicoot 4 is the perfect comeback game, that is both technically challenging and visually appealing. It’s just a shame that despite his interesting back story, Crash himself is a bit of a non entity.

But if he annoys you as much as he did us, then just put him back on the dusty shelf – no doubt onto his agent about getting a cameo in the next Wreck-It Ralph film as you do so – and play through as another generic character.

Character assassination aside, Crash Bandicoot 4: It’s About Time, is an unashamedly traditional platformer, with more than few welcome twists. There must have been some discussion about the possibility of an open world adventure, but maybe its baby steps and spins for Crash, as he builds up the confidence he needs for the limelight once again.