Anyone who owns a 3DS has to admit that support from third parties has been particularly poor for the newbie handheld. With few to hardly any stand out titles that aren't produced by Ninty themselves, there's been little out there to get excited about.

The truth is, Crush 3Disn't going to change that, but for what it is, it does it extremely well.

The game started life on another handheld, the PSP, and worked well enough. The mechanics of the game on the 3DS go unchanged; the main dressing gown wearing protagonist Danny, who may or may not be a fan of The Hitchhiker's Guide to the Galaxy, has to make his way through a level, collecting marbles (as in he's lost his) as he goes. Collect enough of them, and it opens up a portal that he can exit the level from.

The difference with this version of course is the extra dimension. Where games like the PSP version of this game and Sony's Echochrome suffer is in portraying a 3D environment in 2D. As you would expect, a 3D world genuinely pops out at you on the 3DS.

The 3D effect is heightened somewhat by the fact that you have to crush the environment into 2D to progress. By doing so, it gives your character the ability to access areas that he wouldn't necessarily be able to get to from his current 3D position. This means that to reach his goal, there's a whole lot of flicking back and forth from 2D to 3D.

As an added bonus, in each section you can also pick up a book and a trophy, although these aren't necessary to complete the level. 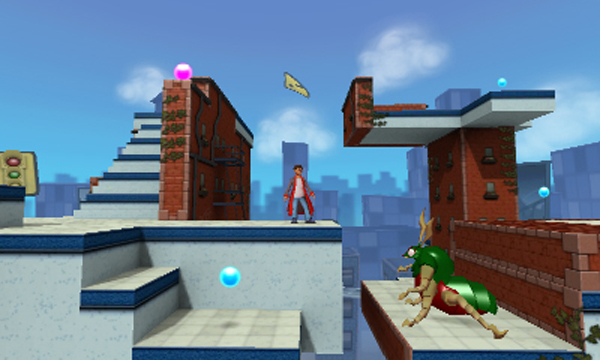 I know these flats are in a desirable area, but i'm not overly impressed with the level of finish. A few more walls would've been nice.

There are four different worlds to explore, with each one host to 10 levels. Forty levels in total may seem a little on the short side, but it's unlikely that you'll breeze through each one that easily. If you do get stuck there is a useful hint button you can hit, that will usually give you the vital clue you need to complete the level.

To make things even more interesting/difficult, there are also obstacles to overcome and creatures to avoid.

Thankfully there's no time limit for the levels, not in normal mode of play at least, thank God. Which means you can truly take your time to work out this most puzzling of worlds. And boy will you need it. You're also helped by a decent camera set up that allows you to view the level you're on each and every way. It gets a bit fiddly when all you want is a larger overall view of where you're at, but it doesn't get in the way.

The most telling thing however, is you could easily play the game without realising that the 3D switch on your 3DS is off, which is pretty disappointing.

It's the kind of title however that is unlikely to convert non puzzle players to the genre; what it will do is make those who do enjoy using their noggins, salivate uncontrollably. Just make sure it's not over the 3DS.

Crush 3D is a clever little puzzler  maybe a tad too clever for its own good at times  that requires just as much patience as it does perspective.