For years now comic books have had cross-over issues where one superhero would team up with another for some super, superhero action. Not only did this allow readers to have a good nights rest without resorting to staying up all night contemplating what if scenarios between their favourite lycra-clad characters, but comic publishers would see a nice little profit from two lots of fans buying into the same fanzine dream/ marketing ploy.

So what would happen then, if you took the leads from two highly successful US TV comedies and coupled them up for one night only? For many, the colliding worlds of Steve Carell from The (US) Office and 30 Rocks Tina Fey is just too good to be true. But does their combined comic powers result in good or evil?

If youre not careful, being married can soon become a world of ritual routines. This observation has suddenly dawned on the Fosters, Claire (Fey) and Phil (Carell). They live in the suburbs, living the suburban dream. Despite spotting the signs early and implementing a regular date night, where they can leave the kids at home with a sitter, evenings out have simply degenerated into yet another dull routine at their all too regular restaurant. 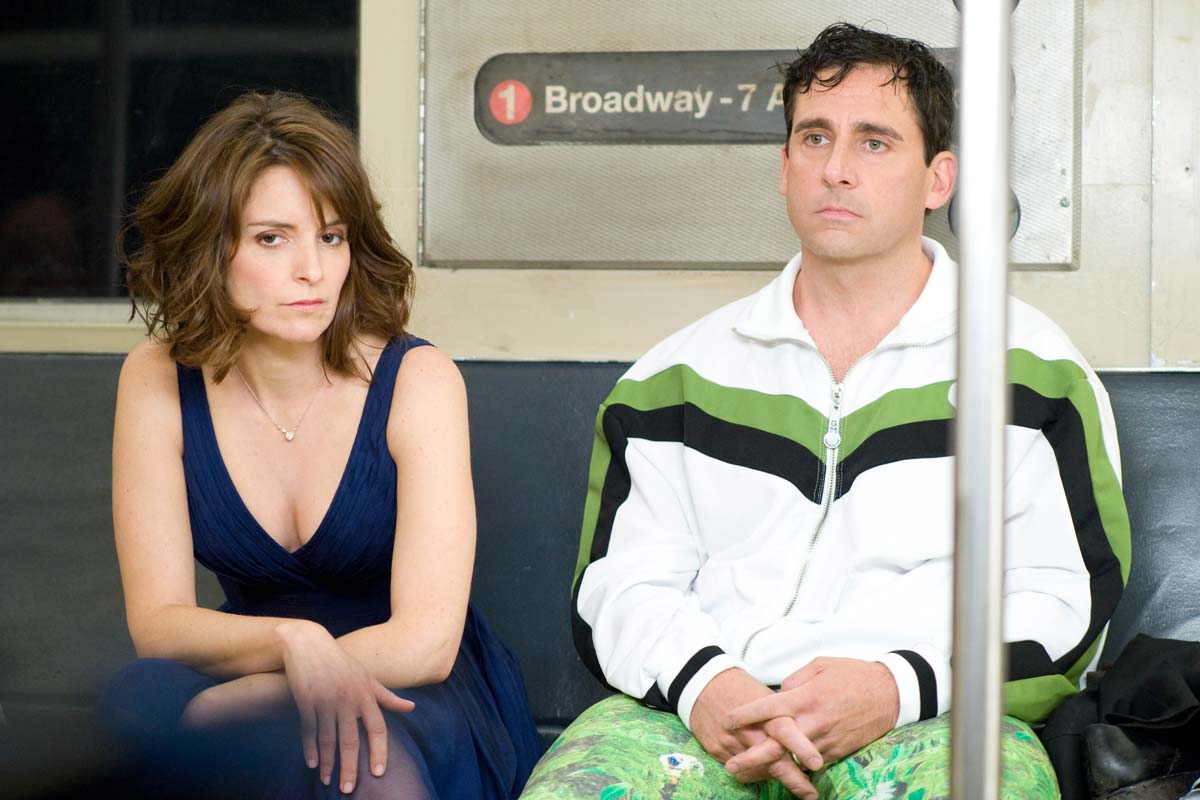 I think whoever told us that Phantom of the Opera was a riotous comedy may have been pulling our legs.

In an attempt to be spontaneous, Phil decides that their next date night will be different; they will take the drive into the city and frequent one of Manhattans über trendy bistros. Unfortunately for them, they are booked solidly; its a busy Friday evening after all. Undeterred, they take a seat in the bar, where Phil overhears a waitress calling the Tripplehorns to their table. As they appear to be a no show, he jumps in and declares that they are the Tripplehorns.

During their lavish meal, theyre approached by two shifty types, asking them to step outside. Despite their protests, the couple leave with them. Its only then that they realise that these men believe them to be the real Tripplehorns, who just so happen to be a pair of low-life criminals. Before they know it, the Fosters are on the run for their lives, on a night theyre sure to remember.

For those unfamiliar with the great work Carell and Fey do on their respective shows, Date Night will no doubt provide enough gags to prove itself as being mildly entertaining. Which is fine, as it just that. However, fans of their shows  which conveniently in the US are not only on the same network, but play back to back on the same night  will feel nothing but an overwhelming sense of disappointment from the whole ordeal.

Carell and Fey do their best; they are both utterly charming throughout. And its not difficult to see a double act akin to Lou and Bud, Bing and Bob, Sonny and Cher (actually, scratch that last one) being born here. But the truth is, they can only do as well as the material thats put in front of them. Sadly, a story about mistaken identity is just too damn lowest common denominator for this pairing. They often skate on the darker side of comedy, causing holes in the ice for others to fall through. Here though, they get about as dark as Terry and June.

So you look at the pedigree of the film, to see whos really to blame. The writer has two of the most recent Shrek films under his ogreous belt, with a Thomas the Tank Engine big screen outing as his next project. Not exactly the Midas touch of comedy there then.

He cant take all the blame however; the director Shawn Levys CV includes Cheaper by the Dozen, 2006s remake of The Pink Panther and both Night at the Museum flicks. In essence, he makes the kind of films where laughs go to die.

Perhaps the producers were hoping that its two leads would be able to cobble something funny together during the shoot, to make up for the uninspiring storyline and mediocre script. Well, that clearly didnt happen.

If we could turn back time, like Superman did in his first film, and The US Office and 30 Rock never happened (brrr what a thought), then the amiable paring of Carell and Fey would be less offensive. But they have both proved, week in week out, that they can produce classic comic moments. This then is a devastatingly wasted opportunity.

Date Night proves that sometimes its best for our heroes to stay on their own comedy patches so as not to alter the time/space/comedy continuum. And if this spawns a likely sequel, we may all well be doomed.