Days of the Bagnold Summer

It’s such a warm, fuzzy feeling seeing them grow-up, developing into proper adults. Not your own children of course, as you probably gave up on them years ago, but those TV ‘teen’ stars of yester year.

Simon Bird shot to fame playing Will in Channel Four’s hit comedy show The Inbetweeners. Although he played a teen struggling with everything that secondary school can throw at you, including his three ‘friends’, Bird was actually 24 when he first put on the school uniform for the first time, which sounds a bit creepy when it’s put like that.

With all the adolescent roles that have come his way, this could be considered Bird’s first grown-up job, as he gets behind the camera for the first time, to direct this adaption of Joff Winterhart’s 2012 graphic novel of the same name. 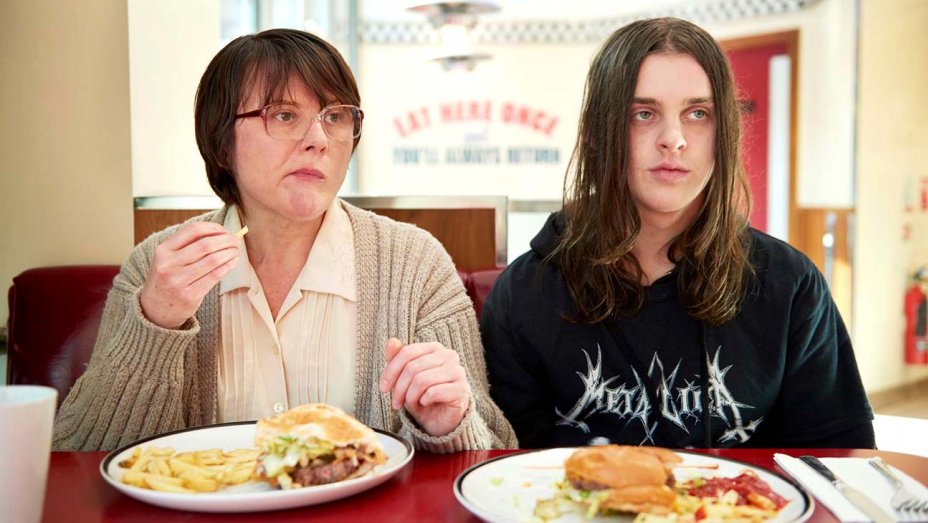 It's always when the waiter brings out the food right after yours that the regret sets in.

Summer is nearly upon young Daniel (Earl Cave), who could possibly have the best six weeks of his life ahead of him, as he’s going to spend them in Florida with his father. Not long before going however, he gets the news that as his father is expecting a child with his new wife, this possibly wouldn’t be the best time for him to visit after all.

Daniel suddenly finds himself resigned to spending his summer at home, with his mother Sue (Monica Dolan). But with Daniel at a seemingly difficult age - growing his hair long, constantly wearing black and listening to heavy metal – Sue often finds herself in that familiar predicament most families find themselves in, of somehow being unable to do right for doing wrong.

And with the holiday period not in full swing as yet, it looks like being a long and prickly summer for them both. Steve was wondering how many shoelaces it would take to create a noose...

There’s something satisfyingly different about this coming of age tale in that it applies to both of its main characters. There’s the all too familiar story of a rebelling teen, but more intriguingly, there’s a mother who is finally able to come into her own.

It’s actually the mother’s story, played superbly by Dolan, which is the more appealing of the two. She’s introduced as a bit of a fuddy duddy librarian, whose only purpose is to bring up her son on her own. As the film progresses however, we get to finally see her fully flourish into her own person; she gets the confidence to get herself out there more, including getting back into the dating scene.

Daniel’s journey is somewhat pedestrian and generic by comparison; not only does he lack the motivation that you would expect from a rebelling teen, he sadly also lacks personality. Out of the two of them, it’s definitely Sue’s plight that your heart will go out to, and not her somewhat mildly annoying son.

The film also features another actor to find himself in the limelight at an early age, but unlike Bird, an actual child star. Some may remember a very young Elliot Speller-Gillot, who played the wiser-than-his-years nephew Errol in the BBC comedy Uncle, starring alongside Nick Helm. Here he plays Daniel’s best friend Kai, looking all grown-up as a gangly teen, but who knows, he could well be in his forties now thanks to the magic of TV and film.

It’s not a particularly complicated film as far as direction is concerned, but that’s what you want directing your first film. Bird does show promise behind the camera though, particularly in some of the framing of his shots, which help highlight the distance between a mother and her son. His summery soundtrack, supplied by Belle and Sebastian, is also the perfect accompaniment.

The fact that Bird’s film’s actual focus is on a middle-aged woman who finally getting the opportunity to bloom, is a sign of maturity in itself, particularly on his debut, and certainly hints at better things to come. The real star of this film is Dolan, who Bird allows to slowly but surely transform from a mothering caterpillar into a butterfly with a better understanding of her self worth.

He may not get the opportunity that often to act grown-up on screen, but here Bird proves that adulthood is not a concept completely beyond him, directing his sweet and tender debut.