Director Peter Berg knows a thing or two about disaster flicks; he did after all direct the woefully bad Battleship, which was inconceivably based on the classic guessing game. Thankfully it quickly sank without a trace, but surprisingly, Berg's directing career didn't.

This project sees the director helm a story based on the real-life disaster that happened 41 miles south east off of the Louisiana coast in 2010. And it seems that one disaster can cancel another out.

So you don't understand why i'm not wearing a red boiler suit? I'll tell you, i'm f***ing Kurt Russell!

Returning from some well-deserved leave, rig supervisor Jimmy Harrell (Kurt Russell) is disappointed to learn that the team on board the free-floating oil rig Deepwater Horizon, who were supposed to pour concrete on site to help maintain the rig's stability, have been sent home.

This cost-saving measure (aka cutting corners) was ordered by BP company man Donald Vidrine (John Malkovich). Not happy with the decision, Jimmy orders a pressure test to see if the pipeline was coping. When it comes back showing dangerous levels, Vidrine insists that the same test is run on the alternative kill line. When the results from that test come back more favourably, he orders that the pumps be turned back on for business as usual.

However, the second test didn't reveal the full extent of the situation, which was that the pressure was really mounting - for all concerned - and something was about to blow.

It's always tricky getting the balance right with real life disaster stories are concerned; you want to be faithful to the facts, but at the same time, you want a certain amount of bang for your buck. Thankfully Berg gets this cinematic equation spot on. 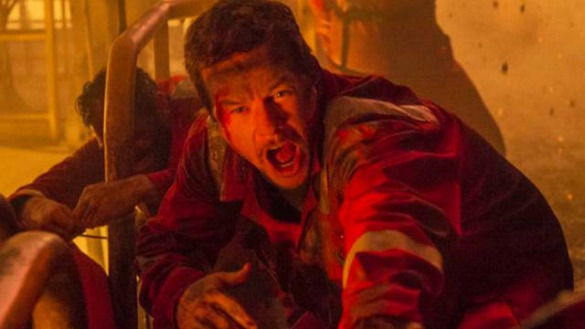 Hey New Kids on the Block, look what I can do!!!

The script is surprisingly sharp, with dialogue between the workers being the kind of witty and honest banter you would expect from such a team. The special effects also manage to impress, with the flaming rig appearing like The Towering Inferno on water.

Berg also secured some strong talent in the way of Russell and Malkovich, who both deliver the goods. As does Mark Wahlberg, who despite not being the most versatile of actors, puts in a surprisingly earthy and realistic performance.

A well told and presented telling of the largest environmental disaster in U.S. history.

Let's just hope that there are no more disasters on the horizon -at the box office at least - for director Berg.