My time as queen of the universe

and why this must stop

Grace Dent is a self-confessed Twitter addict. As of 24th July 2011 she has tweeted a considerable 34,461 times, follows 628 people, is followed by 76,577 people, and has been listed 1,477 times. This will be mumbo jumbo for those of you who prefer to live life rather than tweet about it, but for those in the know within the twitterverse, these are some serious numbers.

Spotting a gap in the self-help market for those in her position  or perhaps spotting an opportunity to turn her razor-sharp wit on this zeitgeisty communications phenomenon, daring to venture where few comic writers have yet dared to tread  Dent has just released this zippy read. 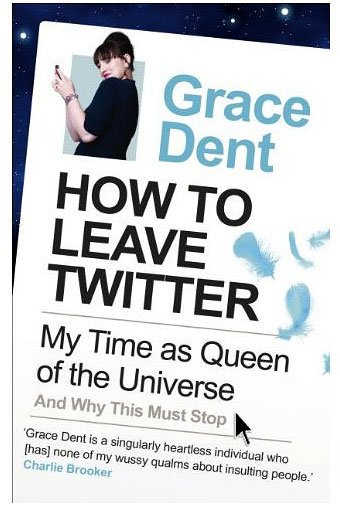 As well as being an accomplished author (having already written 11 fiction novels, one of which has recently been acquired for TV development), Grace Dent is a journalist (penning magazine features and newspaper columns for the likes of Cosmopolitan and The Guardian) and regularly appears as a guest on radio and TV as a talking head, typically discussing entertainment. How to leave Twitter is Dents first foray into non-fiction.

This book clearly isnt for those whose Twitter cherry is yet to be popped. For anyone in that position, Twitter is a massively popular platform that allows users to follow each other and to communicate in up to 140 character bursts. Such a description of course fails to capture the essence of Twitter, but perhaps indicates the difficulty of communicating much at all in 140 characters or less. Somehow though the roughly 200 million Twitter users worldwide make do, populating the site with more than 50 million tweets each day. A study in 2009 found that 40% of tweets were pointless babble and 38% conversational, with the remainder of pass-along value or involving self-promotion, news or spam. Whilst such analyses give us a flavour of what happens, they fail to tell us much about the Twitter experience and the types of people using it. Enter Grace Dent for her witty, acerbic take on it all.

Its a very quick read and somehow - despite Dents ROFL-inducing prose - its an ultimately unsatisfying one. The lack of a contents page or obvious chapter headings gives the book a fairly unstructured feel, reminiscent of the ceaseless flow of tweets in the Twitter timeline. Although the title sets us up to expect some kind of self-help guide  obviously with comedic overtones, since Dent wrote it  this is left til the very end; the bulk of the book comprises a series of short chapters on the various hilarious reflections Dent has on the site from her years of experience as a committed user.

Chapters include 100 things about me and Twitter (a kind of autobiography of Dents personal Twitter timeline over the last 3 years shes been a user); How to join Twitter (charting the stages from resistance to dependency); Justifying your Twitter addiction (from claims that its great for breaking news to bragging); The downsides of Twitter (with agony aunt style advice for those compelled to produce a range of particularly irksome tweets); The terrible oh why have you unfollowed me email of doom (including top 10 reasons to unfollow someone); You have been watching (caricaturing distinct types of Twitter users); Celebrities on Twitter (a kind of apology for why celebrities dont behave like, or interact much with, ordinary users); and  at last  How to leave Twitter (comprising a list of you know its time to leave when scenarios).

Whilst at first glance theres little in this book that focuses on how to actually leave Twitter, perhaps Dent might ultimately succeed by alienating pretty much every kind of Twitter user that isnt as smart or as funny as she is, equipping them with crippling complexes about their Twitter personas.

The best things about this book are Dents sense of humour, her amazoid writing style and her rants. Shes especially brilliant calling all the flagrant sexism shes confronted with as a writer, as a pedestrian and when watching the telly. You get to see inside the mighty Dent mind, to find out what drives her bonkers and what makes her smile. Perhaps this book serves as a kind of blueprint for becoming Dents ideal Twitter pal.

Despite the misleading title and its borderline un-navigable structure, this is an occasionally excellent and ultimately enjoyable piss-take of all things Twitter. It's just a shame it feels a little bit elitist at times.