When it comes to driving games, rallying isnt everyones cup of tea. Its not a race for a start. Its just you, a course, against the clock. Fastest time wins. It was no surprise then that this series broadened its driving horizons with its Dirt theme.

This meant that you could include rally cross, trailblazer, raid, land rush, as well as rally events. Which means you get even more wheels for your wonga.

CMD2 is the first release since the world rally champ died in a helicopter accident; its safe to say however, that he would be proud to still have his name on the box. 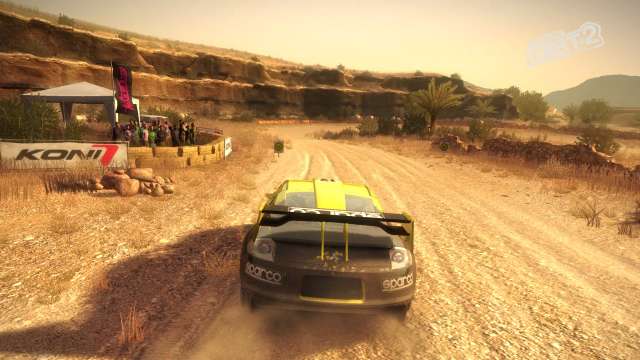 Ah, the open road. Not a soul around. At all. All alone... Hello? Shouldn't there be more in this multiplayer mode than just me?

It has to be said that Dirt 2 isnt an arcade style driving game. Although its the closest its ever been to being one. Its really a hybrid of sorts, that looks and sounds like an arcade title, but handles more often than not like a sim. If you expect to put your foot down and just fly around the courses, youll probably just keep coming off of them.

You see, at first the cars feel like they handle as if theyre auditioning for Dancing On Ice, but with the grace of that Tucker Jenkins off the telly. Corner. Skid. Corner. Skid. So its like learning to drive virtually all over again. After a few false starts, youll realise that speed isnt key, but staying on the course is. For in Dirt 2, braking is your new best friend. Its also one of those racers that finds you using the directional buttons on your controller to steer; if you attempt to use the analogue stick, well, youre in for a bumpy ride. Playing certainly gives your left thumb a work out, as its jumping manically from left to right like some kind of rhythm game, to continuously compensate for over/understeering. If only they made courses that ran in straight lines.

Once you get a feel for the cars on the courses, you can start to enjoy yourself a little. The different disciplines test your driving abilities in various ways, which means that every race feels distinct. The more races you win, the more courses you open up. And boy there are a lot of courses. Each of the four continents represented (Europe, Asia, North America, Africa) have their own unique feel, including driving through jungles, canyons, villages, as well as stadium-based events. This variety means that you will find it hard to get bored with the plethora of courses available.

On top of that, there are also competitions to qualify for and enter into. It just keeps giving.

It can still be frustrating though. For instance, it doesnt take much in the way of contact from another vehicle to have you spinning like a coin off the road and out of the race. And if youre on your last lap with the finish line in sight, only makes it all the more infuriating.

Online can be a lot of fun though, as in many instances  particularly the rally races  its very much a case of the tortoise often beating the hare. Most speed freaks put the pedal to the metal, only to find themselves taking a sharp corner faster than they should have, then being introduced to the side of the cliff waiting for them on the other side.

Theres also a lot of detail gone into the courses. The only real downside is the lack of changes in weather. Sure the cars can get a little muddy from the various pools of water, but it would have been great to drive through some bad weather like a massive down pour or even heavy snow once in a while.

It may not be a pick-up-and-play kind of racing game, but if you have the patience to almost re-learn how to drive, it can be a very rewarding experience.