There’s a certain amount of bravery that comes with releasing a game alongside a new generation of consoles, more so when the quantity of released titles has been so lacklustre, as it has been with the release of both the PS5 and Xbox Series X/S.

It can be a double-edged sword; there will be an eagerness to pick up games to play on these devices, particularly with so little choice available, but at the same time, it does mean that your game could possibly come under more scrutiny, being touted as a next gen game.

Codemasters certainly timed it well with being the only racing title to get a release, and some of the pressure was certainly off by Dirt 5 not being an entirely next gen title, as it was a cross-gen release, but there’s no denying that just by being a new release for a new generation of consoles, you’re likely to gain a whole lot of attention.

So how does this driving game handle on the next gen? 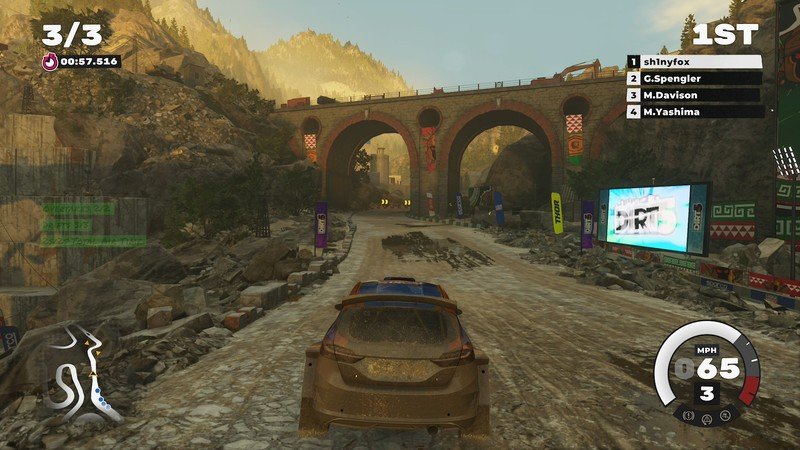 Apparently there's a castle just around the corner where you can get your eyes tested...

It’s safe to say that this is the most arcade-y iteration in the franchise to date, and it’s all the better for it.

Certainly Dirt 5 wins in the pick up and play department. There are no tutorials to wade through, just click on Career, pick a vehicle, and race. It’s also this simplicity that is part of the game’s undoing, but more of that later.

There are a number of different disciplines available, which you will soon become familiar with. There are courses where you drive through jungles on dirt, on roads in urban environs, on gravel for more off-road tracks, and oddly on ice course too. Win a race and it opens up more opportunities to race on other courses. As you would expect, the game uses that old chestnut of using the same course again, but only this time in reverse, which always feels a bit of a cheat, but is sadly now familiar trait for the racing game.

The type of course also often dictates the type of vehicle you get to drive on it, although the handling, for the most part, is very similar.

There are a few oddities that didn’t quite sit true with the concept of the game, mostly that of the Gymkhana; this event isn’t a race at all, but sees you driving around a course pulling off donuts and other tricks in designated areas for points. Although some may welcome its inclusion as a welcome distraction, for us it felt jarring, and just not any fun to play.

There is also one event – sprint – that was a little peculiar too. It is the only event where you can’t buy another vehicle to race in it. That wouldn’t be so bad if the car handled well, but unfortunately the one you’re given is akin to the wonky trolley that’s impossible to steer in a straight line. To be fair, the event proved to be the most challenging of all the races, but it didn’t make it any less annoying to participate it. 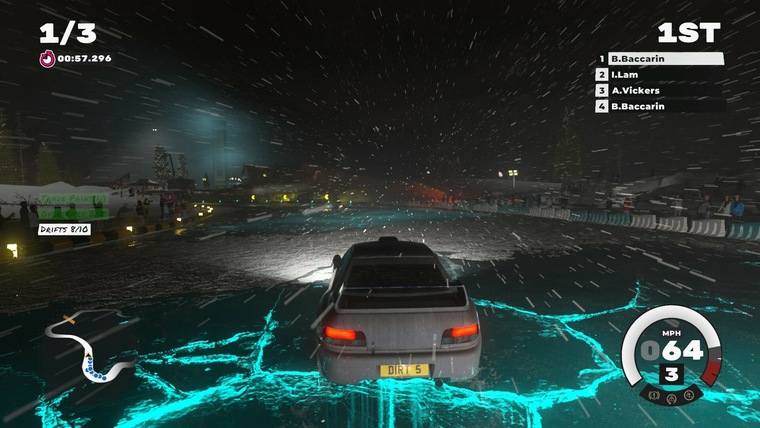 Erm, I think the SatNav might be on the fritz again. This doesn't look like Slough High Street...

Playing as we did on the Xbox Series X, we certainly found the next gen performance of the game wholly satisfying if a tad underwhelming. The game certainly played well, with no distractions visually other than the pleasing vistas on offer. We cranked all the switches up for our HDR friendly TV, and found the sense of speed to be a pleasing affair. There a number of tight corners on many of the courses, which will find you spinning rather wildly to take them, but both the console and the TV gave the impression of a silky smooth ride.

It’s a shame that some of the courses didn’t quite take full advantage of it. Certainly the ice courses impressed, particularly with the lights shining off of the wet, gleaming surface, but some appeared to take place in a gravel pit, with the dominant colour and mood of the track being exceedingly grey. And with a number of courses being repeated one way or another, these tracks were always the dullest to take part in.

If you are used to getting behind the wheel of a fast moving virtual vehicle, you may find that there’s not much by way of a challenge here. For the majority of races we found ourselves in, once we were in first place, there was very little chance of losing, with the field only growing further apart with each passing lap.

To add to this general driving malaise was the fact that you only really ever needed one decent car in each category, with no real impetus to buy another, especially as the majority would be underpowered to the car you were currently driving. This meant that you could be earning big bucks from all your wins, but sadly nothing to buy with it. And with no means of upgrading your vehicles, you reach a plateau of racing fairly quickly.

You’re not really helped by other elements either, such as the throwdowns that occur, that find you often in a one-to-one scenario to prove your talents. As with other aspects of the game, the rewards are somewhat paltry, often meaning that the only drive for success comes from finishing first.

Dirt 5 does feel like a move in the right direction however, with its vibrant courses, superb car handling and playful interface, allowing for some mud-splatting, ice-sliding, gear-grinding fun. It may not be the perfect showcase for the now new generation of consoles, but it certainly gives you a front seat as to the possibilities just around the corner.