Bananas. Thats what youll see a lot of during this game, whole bunches of them. Its no surprise really that father & son Kong outfit Donkey and Diddy like to collect them; theyre part of your five-a-day after all. But the further you explore this latest Donkey Kong world, the more likely itll drive you towards another food group  nuts, but more of that later.

Now as most of us know, Donkey Kong is no stranger to games; he has after all shared the same platform(s) as a certain Italian plumber, back in 1981. Since then, Kong has often branched out on his own, as it were, popping up in various game franchises. He got his own big gig in 1994 though when he took centre stage in Rares gorgeous looking SNES title Donkey Kong Country. It was a huge hit, mainly for being one of the first console games to us pre-rendered 3D graphics in a 2D side scroller.

And who can forget his Jungle Beat title, which saw you controlling the aped one with a pair of plastic bongos? Bashing your bongos has never been so much fun, or surreal for that matter.

Sixteen years later and DK is going back to his roots, returning for some more thumping antics. Essentially the game hasnt changed much in terms of gameplay; you get a little more 2D for your buck  its what usually described as 2.5, as although still played out on a 2D plane  the action can occasionally jump further into the screen, giving it just that little more depth. 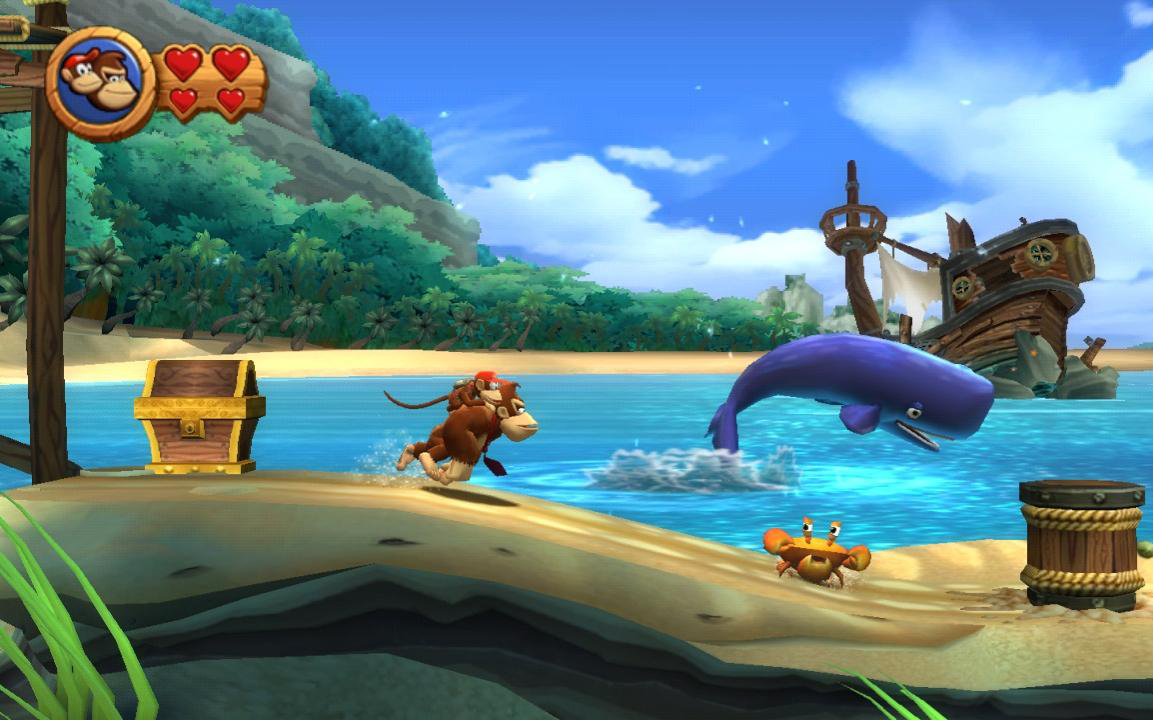 Quick Diddy, if we can keep up with it, we may be able to get Johnny Depp's autograph. His Cap'n Jack Sparrow does make me chuckle.

Theres a mumbo jumbo storyline line for those that care for it  a mysterious tribe of musical miscreants have put a spell on all the animals on the island, apparently  but really the heart of the game is to get the Kongs from left to right within the level. Sounds easy right? Far from it. For starters, each of the games six worlds is broken down into many levels. Within one level, there is only one save point roughly in the middle of it (later levels may throw another save point in, just to mess with your mind); die at any point before reaching it and you will go all the way back to the start. And you will go back to the start, a lot, even if youre a platforming god.

Thankfully, each world has a shop you can visit  and boy will you be popping in there often  where you can purchase extra lives (in the lovely shape of red balloons), amongst other things; even if you borrowed the 99 from Nena, youd probably still wouldnt have enough to finish the entire game.

And if trying to reach the end of the level wasnt super difficult as it was, you can also attempt to not only collect the iconic letters K, O, N and G, but there are also puzzle pieces to collect.

You also dont have to go it alone; little Diddy can be controlled by another player and the pair of you can bravely traverse the many dangers the island has to offer. But if one of you isnt that good, you may have your very own Vietnam moment in trying to carry your other fallen co-op partner a lot of the way.

So yes, the game is well hard. But despite being tougher than David Haye, it will have you coming back for more punishment. Why? Simply because it imbues the whole just one more go philosophy. Every world is beautifully rendered, with the kind of small details that just makes you smile. Kong jumps, swings, climbs, crouches, throws; about the only thing he doesnt do is appear in a wildlife show with David Attenborough. He also spends a few levels in vehicles, such as a runaway mine cart or one of those flying barrels you hear so much about in the news. Just dont expect these levels to be any easier though.

Its pure old skool joy; perhaps a tad too old skool. Even with the ability to be shown through a level by an old greying ape doesnt help that much. Its like watching Lewis Hamilton drive round Silverstone in Formula One car, and then be expected to drive around the course in the same way. You can see where youre going wrong, but it doesnt necessarily help you pass that point.

On the surface it looks like a cutesy little platformer, with cuddly apes playfully making their way through the levels. But this apes got balls the size of Saturn. So if youre thinking of giving this to a small person (child or dwarf/midget) expect lots of tears. And if you buy it for yourself, well, you can expect tears too.

If you dont get frustrated at some point with this game, then youre just not human. But for the most part, you forgive it, because its heart is in the right place even if its shoddy platforms arent.

It takes a simple enough premise  start at A, finish at B  and throws in the kind of curve balls that only Babe Ruth could hit back. But its good to feel challenged sometimes. Its good that a game can be released that isnt just a mamby pamby shovelware title for the Wii. Kong means business, thats for sure.

It has its own rewards however; theres nothing quite like the feeling of finally nailing a section. It doesnt happen often, but when you can look Kong in the eye with a mutual stare of respect, its a great gaming day indeed.