1993. The year the Brian De Palma directed Carlito’s Way, starring Al Pacino and Sean Penn, was released. It’s arguably the last great De Palma film; sure, he’s made others since, including the first Mission: Impossible in 1996, but the rest, by his high standards, have been poor.

This thriller then, is his latest effort, at the ripe, young age of 78.

it wasn't me, mine don't smell that bad.

In the near future, 2020, in wonderful, wonderful Copenhagen, is cop Christian (Nikolaj Coster-Waldau) and his partner Lars (Søren Malling), doing their best to keep the city safe. Lars offers to pick Christian up for their early morning shift, at 4AM, which he does, only for his partner to be otherwise engaged. In the rush to leave his apartment, he forgets to pick up his gun.

Before the pair know it, they accept a call of an incident at a building, so they go to investigate. The fact that Christian has forgotten his weapon has serious implications, particularly for Lars, and ultimately the criminal, Ezra Tarzi (Eriq Ebouaney), gets away.

But not very far, as he is soon caught, unbeknownst to Christian, by the CIA, who have plans of their own for Tarzi. He witnessed his father murdered by ISIS and seeks revenge. Which is good news for agent Joe Martin (Guy Pearce), who has decided to kidnap Tarzi’s son for insurance, just so Tarzi carries out his plans. These involve the apprehension of ISIS kingpin Salah Al Din (Mohammed Azaay), who is busying himself in plans to bring death and destruction to the west, natch.

Christian is dead set on capturing Tarzi, but in doing so, finds himself embroiled in a wider terrorism plot that’s bigger than them all. 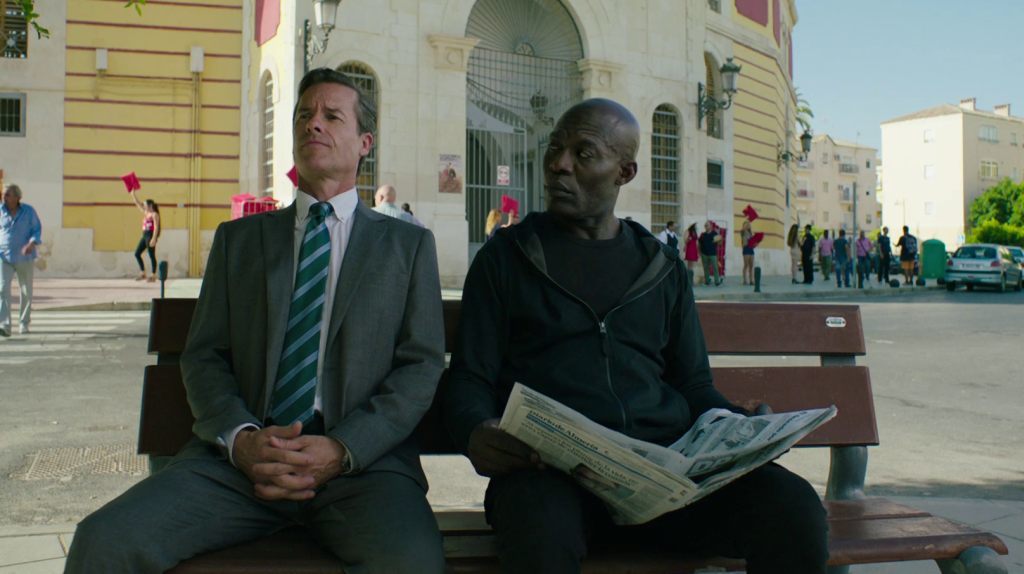 You can never place enough importance in posture.

So you’re Nikolaj, and winter has officially ended for you, and you get a call – it’s Brian De Palma, and he wants you in his next film. You say, yes, obvs, it’s the legendary director De Palma after all. It’s only now in hindsight, that you really should have said no, as this is far from not only De Palma’s best work, but all those concerned.

Probably the most disheartening factor is that there’s a pretty interesting story in there. And by in ‘there’, we mean tied tightly, gagged, with no logical way out. There are odd times however, albeit brief, when there are familiar glimpses of what De Palma can bring to the table. Admittedly they are only small things, like the occasional use of the colour palette, or interesting framing angles, but they’re enough to serve as a reminder of previous greatness.

It's setting of Europe is also surprising, only for the fact that everyone is speaking English. It's a relief when the foreign baddies speak and they have subtitles, as it somehow reinforces how evil they truly are.

Surprisingly, the story isn’t the biggest villain of the piece, it’s the music. It feels like De Palma’s brief to Pino Donaggio – who sounds like he should be served at just above room temperature – was to listen to Bernard Hermann’s work with Hitchcock. It certainly begins as a sincere homage, but as the film progresses, it becomes more and more of a parody, to the point where it is alarmingly obtrusive.

It’s not the only nod to the master of suspense either; De Palma appears to repeatedly borrow from Hitchcock’s work, from the rooftop chase inspired by To Catch a Thief, to De Palma’s bullring finale which is a reworking of Hitch’s Royal Albert Hall scene in the Man Who Knew too Much.

The film’s title promises much – a story that is triggered by an unfortunate event that has a knock-on effect throughout the entire film. What it delivers is something else entirely, akin to someone attempting to break a Guinness Book of World Records dominos feat, and failing miserably, only setting off the first 20% before coming to an abrupt and disappointing end.

All this effort doesn’t even come close to toppling the most average films of De Palma's. Whether titles like this taint the greatness of an aging director like De Palma is probably best left for another day, but at least he should be applauded for still producing work at his age, even if the work itself doesn't quite deserve the plaudits.