Doraemon Story of Seasons: Friends of the Great Kingdom

We live in dark times ladies and gentlemen. If we needed any indication of this, all we have to do is look at how popular cosy games have become in recent years.

What game did the masses turn to during the height of the pandemic? That’s right, Animal Crossing: New Horizons, because being ripped off by Tom Nook and catching fish calmed us all down.

Since then, there’s been a quiet explosion within the cosy genre, with more titles released you could shake a hoe at.

This latest release from the long-running Story of Seasons franchise, is another instalment in their cross-over with the Japanese Manga series Doraemon. 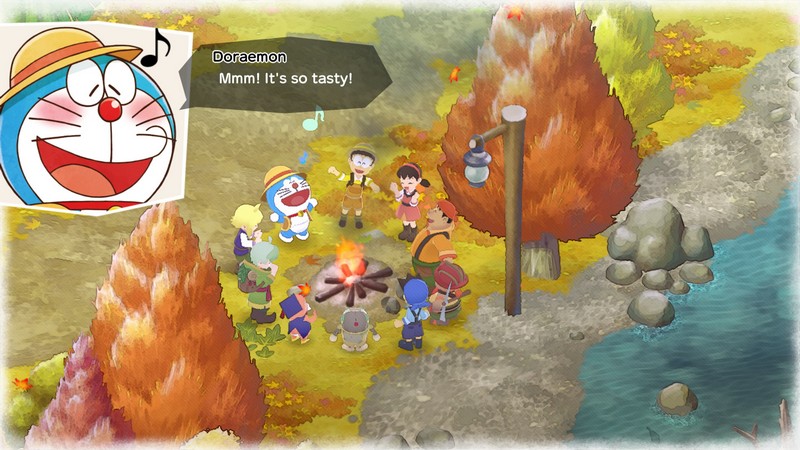 And an hour later, they we're all picked off, one by one, and all met truly horrific ends.

Young Noby gets into a situation with his folks, which gets him a bit annoyed. So his Robot cat Doraemon decides to cheer him up by taking him and his friends into space in his home made rocket.

When they land, they discover a world that looks eerily familiar to their own, where they end up staying on a rundown farm. As they can’t return home anytime soon, they decide to help out by bringing the farm back to life, as well as helping out the rest of the community. But does Noby, Doraemon and their friends have what it takes to run a farm? 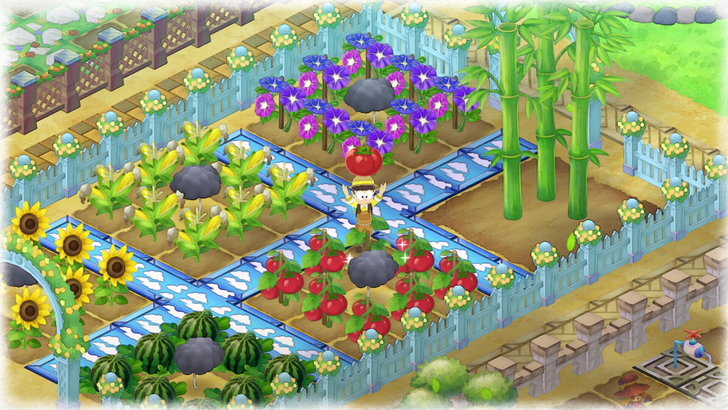 Trust me, all this produce will make you high as a kite, just look at me!

Although we’ve played other entries in the Story of Seasons franchise itself, we have to admit to being unfamiliar with Doraemon and his friends. Luckily, you don’t need to be, to enjoy playing this game, as it all plays out as a self contained story, giving you pretty much all you need to know to get by. Of course if you are aware of Noby and pals, then there’s a chance you’ll squeeze a little more enjoyment out of the game, but it really is no great loss if you don’t.

Anyone familiar with farming sims will be well at home here though. You have to plant seeds, water them daily, tend to any farm animals that are available to purchase, etc. So all the usual farming suspects.

You also have to not only make friends, but develop those friendships over time; this is particularly useful as, when you reach a certain point, your friend can hang out with you and help you with your chores. Actually, if you’re smart about it, you can actually get away with making them do the majority of the work, just by hanging around the area that needs attention. For instance, when it came to watering, as you as you have water in your can (oo-er missus), if you stand on the area that needs atending to, your pal will start to do it automatically. This isn’t as lazy as it sounds, because you have a heart meter that runs down the more active you are. It can take some time for them to get it done, a fair few in-game hours, but it does mean that you have the ability to get on with even more work without having to take a nap and rest up.

Your companion is also good for fishing too, where they whip their rod out (again, oo-er...oh you get the idea) and start to fish alongside you. And the great thing about this is that everything they catch is yours. The same goes for when you’re mining too.

You can also enjoy the game with an actual companion, enjoying all the joys of the farm with a two player mode.

These types of games, and this one specifically, are the epitome of the cosy game, as the pace of the game is almost non-existent. For instance, we asked a couple of carpenters – who really could do with some counselling with the amount of arguments they have – to build a wee barn for a horse that was coming our way. They agreed and said it will take something like five days. There’s no actual way of tracking it, but we believe that they may be taking the piss, and may be a couple of those cowboy types that you might see on that BBC show Rogue traders. So much so they we were almost compelled to email that nice Matt Allwright and let him know what’s going down. It’ll probably turn up at some point, but it’s taking its sweet, sweet time about it. Which is kind of the point.

Here’s the thing, no one does a speed run of a cosy game, and that’s for good reason. Their whole purpose is to slow things down and just appreciate the many menial tasks throughout the day, and in doing so your mind will slowly melt to a suitable level, allowing you to concentrate on remembering to enter tomorrow’s exciting fishing tournament.

So it has all the ingredients of your standard farm sim. However, the fact that it’s a crossover, featuring already established characters, does bring something new to the sturdy kitchen table, which almost resembles a story mode.

Most of these games go on ad infinitum, with no such thing as an end game; you may ultimately fulfil all of your tasks, but even then you can continue to harvest your crops etc.

This one feels slightly different, in that you are actually on another planet, and everyone who arrived on that rocket really do have their own homes to go to. Now being that we’re really in the relatively early part of the game, we don’t know how it’s going to play out. Where hoping that they’re all about to leave, and then one of them, probably Noby, announces that these are his people now, and that he will stay and live amongst them as one of their own. It transpires he made the right call, for as he sees his friends reach the horizon, an explosion takes place that disintegrates all on board in seconds. Or something to that effect. But we’re guessing that’s probably not the root the game will take. Shame.

There’s also the fact that Doraemon is a robot, and has some cool gadgets about his person, which you really won’t see in other farming sims. For instance, at one point he’ll be able to water crops with a Mini Raincloud, which we don’t think you’ll get anywhere else. So this crossover certainly has its benefits in bringing some new elements to the world of cosy.

It’s a beautiful looking world too, that has the appearance of being a pleasurable mix of cartoon characters living in a hand-painted, water coloured world. It’s just so dreamy, with the blossom falling wherever you go. You can even go to a hangout over the sea, where no doubt the locals go to get lucky, smooching and that whilst the sun gently sets. So cosy indeed.

It also has a superb soundtrack that just makes the gorgeous looking world that little bit dreamier.

With the world in the very sorrowful state it’s in, Doraemon Story of Seasons: Friends of the Great Kingdom is a glorious way to unwind, blissfully unaware of civilisation crumbling around you, as you focus on next seasons harvest of strawberries. Farm on.