To quote a certain Private Frazer, we’re all doomed. Over the years, we’ve not-so-slowly been destroying the planet. It’s great that those with a social conscience do their best to be responsible by cycling, recycling and turning tech off instead of leaving it on standby. But realistically, the damage has already been done and we’re truly buggered. So, so long, and thanks for the fish.

But while we’re all waiting patiently for the world to end, we might as well enjoy director Alexander Payne’s new film that offers a humorous, if implausible, solution. 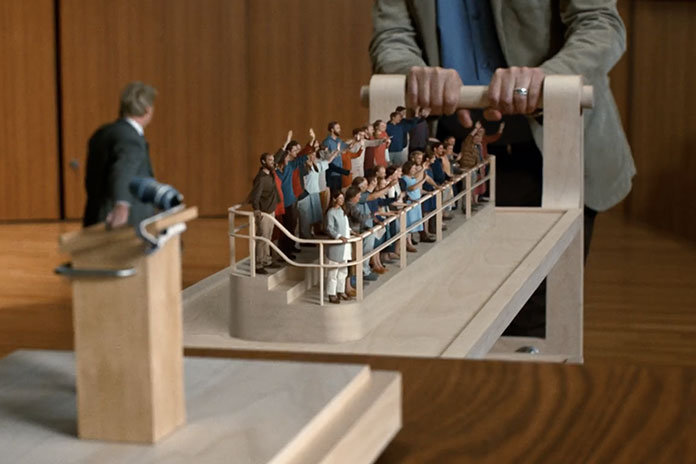 Can I interest anyone in a small hors d'oeurve?

Despite having a decent job as an occupational therapist, Paul Safranek (Matt Damon) and his wife Audrey (Kristen Wiig), are struggling with their finances in Omaha. Audrey wants to move into something bigger, but they just don’t have the money to do it.

Meanwhile, there’s a huge advance in science. Boffins in Norway have made a breakthrough in miniaturising people to the ratio of 2477 to 1. This roughly translates to reducing the average person to five inches tall. This reduces the footprint – literally – of the individual and their demands on the planet.

This technology takes off in a big way, and it makes sense both financially and on a social responsibility level, so Paul and Audrey sign up. Next stop, Leisureland, one of the best micro communities on the planet.

After being miniaturised however, the reality of it doesn’t quite match up to Paul’s ambitions, as he soon realises that being smaller has its own restrictions and limitations. 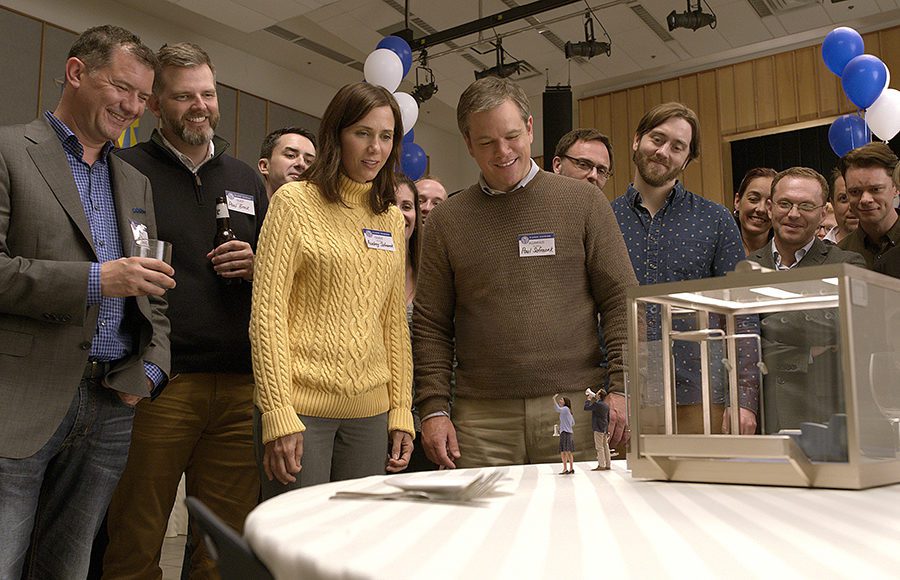 Wow, who invited all these big people?!

So, there’s no denying that this film’s premise is a fascinating one. Some however, may well expect a different execution. It sounds like a new version of something akin to Land of the Giants, or Honey, I Shrunk the Kids, where large LOLs are to be had with gigantic dogs trampling on tiny peeps and the like. Thankfully, it’s not that at all.

Payne’s film, which he co-wrote, highlights the real problem of global over-population through the use of a ridiculous resolution. As the film goes on however, its focus also narrows, as it delves into the angst of one man, as he deals with what he wants to do with his life.

Damon plays the everyman well, knowing that his journey is just as much about the flamboyant characters around him, namely his new neighbour Dusan (Christoph Waltz) and activist Ngoc Lan Tran (Hong Chau), than it is about himself.

Ultimately it’s a story of the demise of humanity as a whole, told through the eyes of someone who would dearly love to make a difference, but isn’t exactly sure how to go about it.

The film suffers from some pacing issues, with Payne being a little self indulgent with the film’s XL running time, but if you see it for what it isn’t – which is an out an out studio comedy – and more for what it is - which is a quirky, warm and amusing look at the end of the world – you will see that it’s a fitting comedy for our ever growing population.