Dragons are one of those mythical creatures that always deliver a sense of awe – except perhaps that stoner Puff. But their level of coolness heated up when the saucy Daenerys showed off, amongst other things, her scaled pets in Game of thrones.

But developer Square Enix where doing their bit long before their arrival, with the birth of their Dragon Quest franchise in Japan in 1986, with the first game in the long-running RPG series.

This definitive edition swoops down onto the Switch, in all its scaly glory. 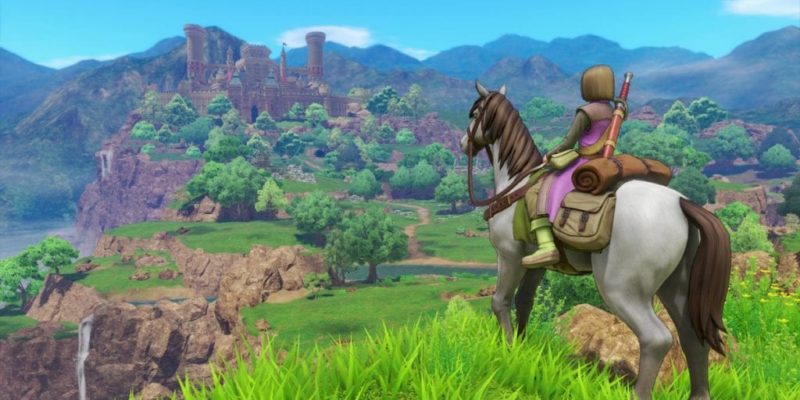 Damn, i wish i had my phone on me. This would blow up on my Insta!

A baby is rescued from a perilous situation and is taken to the small village of Cobblestone, where it is brought up with love by locals. Despite bearing an unusual mark, he looks no different from any other child. But when he comes of age, and visits the Tor with his friend Gemma, he discovers more of his past and, more importantly, what his destiny is, that of being the Luminary.

He then leaves the village to meet with the king of Heliodor, but when that doesn’t exactly go to plan, he finds a whole new adventure awaiting him. 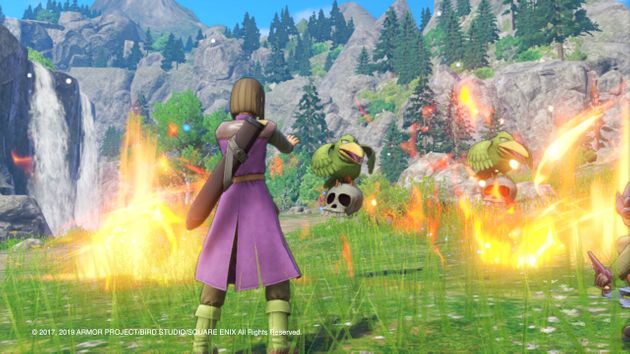 i told you I was gonna heat this party up.

And so begins this eleventh instalment of this popular series, seeing you as both the nameless and mute hero. This S version has all the bells and whistles, including the rather charming retro-fitting, allowing you to play in old skool 2D. It also offers you the option to play it with the original Japanese audio, or use the curious English version, which we went for. The different accents for different regions, like the use of West Country in Cobblestone for example, certainly added to the overall charm of the game.

But what of the game itself? For those uninitiated with the series, it’s your classic RPG; the protagonist embarks on an adventure, recruits a team along the way, fighting monsters and collecting treasure. Don’t let the fact that this the eleventh episode put you off however; even if you have never played a Dragon Quest game before, you can play through this one with no trouble at all. We can say that as none of us had played one before, and nothing about it was off-putting. We had played the spin-off Dragon Quest Builders, with the second one being one of our favourite games of the year to date, and enjoyed the familiarity of many of the characters from it, as well as finally being able to put them in some kind of context.

But what if you’re not the biggest lover of RPG’s? Again, that’s us, the one exception being that of the Pokémon franchise. However, this game, unlike Pokémon, doesn’t feature random battles every thirty seconds; instead, you can choose to avoid the majority of them, by just walking around, giving the game a greater sense of fluidity. Of course avoid too many and you won’t get the opportunity to level up, which is the engine room of the game, so it’s an interesting balancing act.

Visually the game is a curious mix of lovingly detailed backgrounds and settings, with rudimentary character design and interaction. As it follows the classic RPG formula, where maths takes over from button mashing for fighting, the most energetic aspect of your character you control in open gaming is a rather awkward jump. Although a bit limiting, and not the most impressive character animation you’re likely to see, it doesn’t detract from everything else the game does right.

Despite never really warming to the RPG genre, Dragon Quest XI simply oozes gaming charm. The series may have been running for yonks, but there’s nothing inaccessible here for the newbie. Everything from levelling up your character, to going through menus, to fighting enemies, is a cinch. There’s even a mini-game that allows you to forge your own gear, which is just stupidly cute. Even every time you save, which is at a place of worship, comes with a pleasing church organ accompaniment that never fails to raise a wry smile.

It certainly helps that both the story and the characters you interact with are also engaging. The world of Erdrea is a colourful one, and is just a joy to discover at your own pace. There are quests and side quests to embark on, but just chatting with the locals, and taking in the surroundings is fun itself.

The fact that there are plenty of opportunities to save is a blessing, even if you can’t do so on the fly, but just be aware that dungeons are notoriously tricky and you should really be well –prepared before tackling them.

Dragon Quest XI is that rare title that seemingly transcends worlds; it is suitably retro and traditional enough to appeal to the hardened of RPG players, and yet also manages to be playable to the complete newbie.

It is a well-crafted, perfectly executed example of an RPG, featuring a world that is just crying out to be explored. It’s much like the contents of the many chests that litter the kingdom, a little treasure.