We’re not ones for reinforcing stereotypes, but even we have to concede that all builders are the same. You have to ply them constantly with weak tea with four sugars in order for them not to build a wall around your front door for a laugh. But the last laugh is on them, because as everyone knows, true gamers never leave the house anyway.

If only building was as easy to do in real life as it is in games. Then we could finally realise our dream and build a replica of the Super Mario 64 castle to live in, complete with moat. Until that day, we will have to rely on games such as this.

The mystical land of Alefgard has been pretty much destroyed. You awake from a deep slumber, only to find that you can’t remember a thing that has happened. If you didn’t know better you would think that someone slipped you a Rohypnol.

What you soon discover though is that you now possess the power to build. Clearly the folk of this land don’t have access to a Yellow Pages or the internet, so someone who can build a wall is seen as some kind of God. 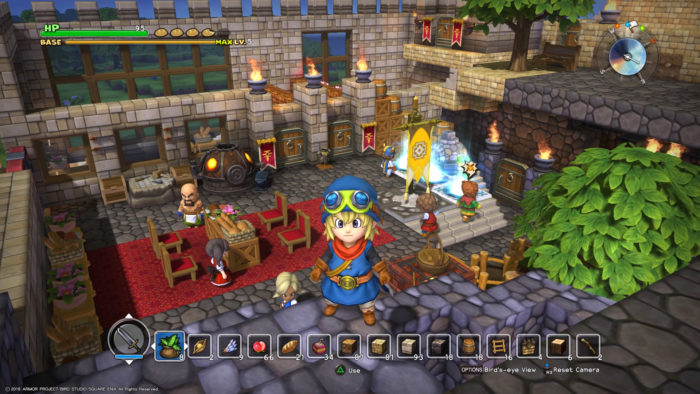 You can only build a number of items to begin with, just enough to attract some more people to your patch. But a few bedrooms, a kitchen, and a room to build more stuff in, seems to keep them happy and wanting more, so they hang around.

But unfortunately for you, the town you have a vision to build is threatened by monsters that roam the land. They come in numbers, ready to attack you and all the hard work you’ve achieved.

But dreams never come true for those with idol hands. Ghandi said that. Probably. So you continue to build, searching the lands for more materials, which help to make even more stuff. With a sword, shield, armour, mallet, and a few kebab snacks to keep you going, you embark on many quests that will help you succeed in being the biggest, baddest builder that’s ever been.

Dragon Quest Builder is a spin-off title from the enormously successful Dragon Quest franchise, that’ been around since 1886. Although not a household title in the west, this RPG has been big in Japan for years. The good news is, is that you don’t need to be a fan of that series to enjoy this one, as it works perfectly well as a standalone.

Obviously the thing that sets it apart from its origins is the whole building bit. In doing so it mixes the building elements of something like Minecraft - both visually and in the game’s mechanics – with the charm and look of an early Zelda adventure. And, for the most part, this hybrid of worlds, works.

The building parts of the game aren’t too taxing, as long as you follow the rules. However we did find on a number of occasions that rooms we’d built didn’t quite meet the game’s building regulations, and took several goes to get them right. 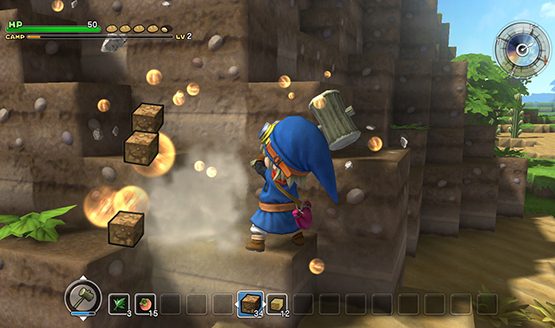 I am indeed a chip off the old block!!!

Thankfully, the RPG side of the game isn’t too hard going either. You have a choice of a few weapons that you swish around in front of you, in the hope of cutting a myriad of monsters down. Most of the time you’re rewarded for doing so, with a useful item appearing after they’ve popped their clogs.

As you progress, you pick up a number of portals, which allow you to transport to far and distant lands, all with their unique enemies and items to collect. Deeper into the game and the ingredients for certain items to build become more complex, with the fusing of other items needed to make an essential ingredient for another.

To say that Dragon Quest Builder is the perfect mobile game, isn’t doing it a disservice. It has all the right ingredients that see you coming back for one more quick go, with the added bonus of not having to pay for any outrageous micro-transactions to progress quicker. It’s also just as playable on the Switch’s screen, as it is to play on the TV.

And as a hybrid, the developers have gotten the balance just right between the building and RPG side.

The game may already be two years old, having already been released for the PS4 and Vita in 2016, but it has aged well and is an excellent addition to the growing catalogue of fine games for the Switch. And to think, no weak teas or builders’ bums required.