Role playing games should be held in the same esteem as when parents warn you about talking to strangers: you should always steer clear of them because as soon as you get close to one, youre in big trouble. Before you know it, youre in a dungeon and youre not sure if anyone will come out of the experience alive.

In Japan in particular, the Dragon Quest series is about as popular as breathing. In fact when a new game comes out, not only do the games sell like whatever the Japanese equivalent of hot cakes are, but they also see a noticeable rise in sales of the console they appear on.

You play a guardian angel who inexplicably falls down to the human world below  the Protectorate  without his halo or wings. Not only that, but all the humans there can see him. Powerless, he soon learns that he must collect a fruit known as fyggs, that also fell from his Celestrian home, off of the world tree Yggdrasil. Some of these fyggs, which contain a strange power all of their own, have possessed humans with a darkness that has made them quite, quite evil.

It is down to this fallen angel to recover all of the lost fyggs, as well as help out as many of the humans as he possibly can. Only that way can he return home to his rightful position as a Celestrian. 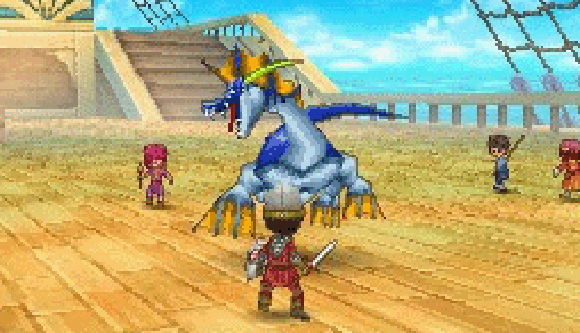 Kill me for coins? Are you serious? I thought that only happened in Scott Pilgrim Vs the World?!

Its completely understandable that after reading all that guff that your eyes start to glaze over. Lets face it, there would be something seriously wrong with you if it didnt. But like the very best kind of RPG, Dragon Quest IX ever so slowly reels you in, and before you know its got you hanging off its line like a bewildered Halibut.

The story is clearly bonkers, and yet the deeper you go with it, the more engaging it becomes. Also some of the themes are pretty grown-up stuff; your character encounters a lot of ghosts for instance, and some of their stories are actually quite touching. We were taken aback by the death of one character, whose demise completely took us by surprise. We werent exactly expecting playing this game to be any kind of emotional roller coaster, but we dont mind admitting it had us fooled.

Its at this point that we have to fess up. We had never played a Dragon Quest game of any kind up until now. Like many normal gamers, weve been put off by RPGs in general, where constant random battles take place and you need to level up every five minutes. Thankfully, and apparently somewhat unusually for a Dragon Quest game, IX dispenses with the constant random battles mechanic; instead, you and your group can, for the most part, decided which foes to get into scrapes with. This becomes slightly trickier in confined dungeon spaces however, but if youre patient, even here you can avoid certain fights. Certainly on the bigger outdoor maps, you can be more selective with whom you want to rumble with.

Being relative newbies, we made quite a few school boy errors to start with. One of our biggest was taking on one of the first boss encounters. Time and time again, we got thrashed. We just couldnt see what we were doing wrong. And then we talked to someone we hadnt stop to chat with before, and they suggested we hang out with some friends. It was at this point that it dawned on us: we werent going to be able to defeat our foe without being in a party first. Sure enough, we recruited three other party members from the inn, to go forth and do battle with. And we kicked butt, which was a relief. And thus our first lesson was learnt: to get ahead, you have to do a helluva lot of chatting. Not only that, youre also giving quite a free reign to do what you want, because at a certain point of your quest, the story becomes far less linear.

When you are recruiting your party members, just remember that a balanced party is an S Club party. The usual suspects are all here: warrior, magician, thief, priest, martial artist and minstrel. Were not sure how it happened, but we became a minstrel. Not the shiny chocolaty treat, but a singer of songs. You do get the choice to change your profession, but its not really advisable. When we reached this point we spent a considerable amount of time levelling up our party to a competent level; by all means change profession, just remember that if you do, your current level for that party member will drop to 1, and you will have to go through the whole boorish rigmarole of levelling up yet again.

As far as multiplayer is concerned, your options are fairly limited. You can play co-up with up to four friends wirelessly, but no encounters with strangers via Nintendos Wi-Fi are possible. What is possible via Wi-Fi is access to a shop in one of the inns that allows you to purchase special items online for a limited time only. Its a bit like what McDonalds does with limited edition McFlurrys but without the calories.

We heard that this game could literally take hundreds of hours to complete. That just sounded like PR bunkum to us. When we began to explore around the island we were on, we were impressed although not daunted by its size. It took us many hours/days/weeks to take it all in, but we felt wholly satisfied when we completed the main part of our quest. And then we were given a boat. Only then did the true scale of the game hit us. Even if you were to whizz through it, youre likely to have acquired a few grey hairs at the end of it. In fact, this is the closest weve gotten to a black hole of gaming, and it scared us so.

And yet we keep returning to it. Fighting monsters, levelling up, opening treasure chests. In other words, our greatest fear has come true: weve fallen under the dark spell of the RPG.

The fact is, this feels more like a hybrid of Zelda and Pokémon, so whats not to love about that? If youre a fan of either of those franchises, then you should feel a warm glow of familiarity here. You go exploring, get into a fight, if you win, you get rewarded. Thats right, just like real life.

A word of warning to the RPG newbie however; even the game makers have stated that this is the hardest in the series, and it shows. In places it will test your patience, and not in a good way. But youll be stronger than we ever were if you manage to walk away from your DS(i) and leave those poor defenceless buggers behind. Heartless but stronger. You took an oath to help save humanity, remember?

Lots of games are described as having pick-up-and-play-ability. Dragon Quest IX certainly has that, but also something a little more alarming: cant-put-the-bloody-thing-down-ability. And as yet, weve not found a spell that can undo that kind of magic.

If you happen to have a life, say goodbye to it now.