You have to feel sorry for the Disney empire. Whilst clearly not making nearly enough moolah from Marvel Studios, 20th Century Fox, Pixar, Lucasfilm etc, they’re having to resort to dusting down their older titles, sprucing them up and releasing live action remakes just to maintain their mega-huge profit margins. Sad times indeed.

With the original 1941 version of Dumbo quite rightly hailed an animated classic, Disney handed over the earlobes to none other than cinematic visionary Tim Burton for this update. 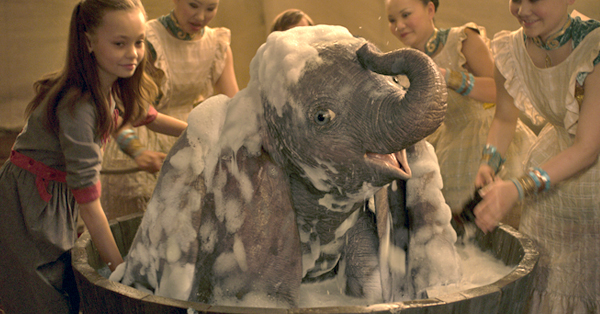 Harsh, abarasive chemicals give my skin that sparkle I just adore!

With the first world war over, Holt Farrier (Colin Farrell) finally gets to go back home. It’s a bittersweet return, as he has two major losses to have to comes to terms with: his left arm – to the war, and his wife – to influenza.

His two children – Milly (Nico Parker) and Joe (Finely Hobbins) - are pleased to see him though, as they have been making themselves useful in the travelling circus they call home.

The circus, run by Max Medici (Danny DeVito), has been struggling, much like the rest of the country. So much so that they’ve had to sell a number of their animal acts off to keep afloat. Max did invest in a female elephant however, as she is pregnant and a cute baby elephant is bound to sell more tickets.

When the rather larger bundle of joy does finally arrive, it doesn’t quite meet Max’s expectations in the cute stakes, and so he demands a refund. Little does he know however, that the newborn calf is incredibly special, and could well be the answer to his prayers, as well as everyone else’s involved in the circus. 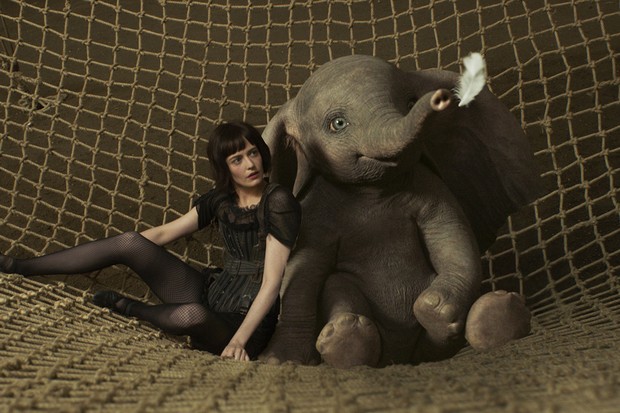 Who needs the internet when you can be thoroughly entertained with just one feather.

It’s been a while since Burton has had a bona fide hit (it doesn’t matter how much kudos you may have, big studios ultimately only care about profit), so it’s understandable that he signed up for this family friendly project. And to all intent and purposes, you can tell that it’s a Tim Burton film; the early period in history suits his style, allowing him to go to town on sumptuous art deco detailed set design and art direction; the circus setting also allows him to pepper his world with his usual troupe of misfits and freaks.

The CGI are also perfectly acceptable, with Dumbo in particular, and the menagerie of other animals that feature, all credible to look at. And on the positive side, at least they don't talk.

It’s the story, particularly the second half, that the falls apart at the seams, which is disappointing coming from Burton, who nearly always delivers as far as this element is concerned. After what is admittedly a solid start, the rest that follows just doesn’t sit right, and feels somewhat jarring. It’s only a small point, but the final part of the film heavily relies on it, and if you don’t buy into it, it just doesn’t work.

The script is also missing the kind of magic that Disney delivers in Sleeping Beauty’s sleep. There is little in the way of humour, and Dumbo himself lacks a defined personality. There’s no playfulness to his actions, or the kind of wide-eyed intrepidness of being in this exciting new world. As a result, the overall texture to the film is disappointingly tame.

You may well believe it when you see a elephant fly (sic), but giving two hoots about it is another matter entirely.