In 1789, in a letter to French physicist Jean-Baptiste Le Roy, Benjamin Franklin wrote “in this world nothing can be certain, except death and taxes”. What he also could have added to that particular list, sadly, is war.

And as cinema so often reflects events of the time, it’s no surprise that the war genre is so well represented on the big screen. And with current political climates around the globe so fragile, it’s understandable that director Christopher Nolan would turn his creative attention to war, albeit one that took place nearly eighty years ago.

Oh no, it looks like Godzilla's been out drinking again. Hats on everyone, HATS ON!!!

It’s 1940 and the Allied forces find themselves pinned back on the beaches of Dunkirk, Northern France. With German troops advancing on their position, they await departure by boat across the Channel to the safety of home.

One British private, Tommy (Fionn Whitehead), finds himself isolated until he comes across another soldier – Gibson (Aneurin Barnard) on the beach. With so many other soldiers waiting in line ahead of them, they know all too well that if they wait their turn, they could well be dead by the time they get on a boat to leave. So they decide that they will have to find other means to vacate the area.

Meanwhile, Mr Dawson (Mark Rylance) and his son Peter (Tom Glynn-Carney), have set sail from old Blighty on their small fishing boat, as part of an initiative by the Royal Navy to requisition civilian boats, to help the cause.

Up in the air, three Spitfires, one of which is piloted by Farrier (Tom Hardy), is attempting to keep the enemy aerial threat at bay. But as they soon discover, the skies are far from friendly. 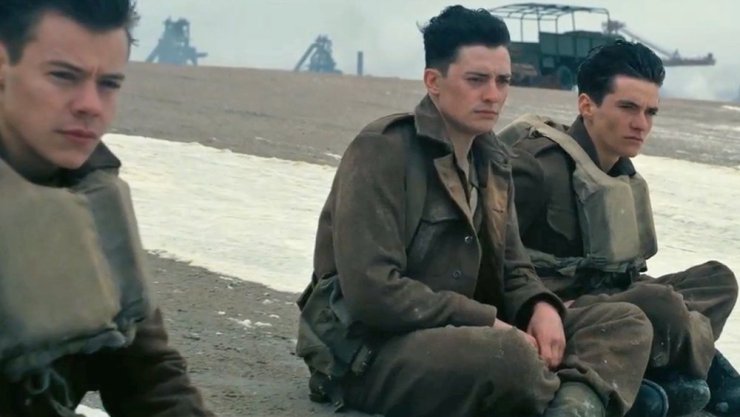 Oh I do like to be besides the seaside. Not.

Although Nolan’s Dunkirk does enough to be classified as a war flick, the director goes out of his way to make sure his film isn’t an archetypal one. The most glaringly obvious difference is the absence of an enemy. By definition a war can only take place if there are (at least) two opposing sides. Without proving to be too much of a spoiler, the Germans were most definitely cast as the main baddies in WW2. And yet despite this detail, Nolan has decided to keep the enemy in his film a faceless one.

Having an invisible threat, especially for a historical event such as this one, does seem curious. The enemy could easily be an army of pink, robotic Chihuahuas, and audiences would be none the wiser. Perhaps that’s being saved for a director’s cut. It does seem to rely heavily on assumed knowledge, which does seem some somewhat foolish in this new age of Google. It also feels like it’s not telling the whole story, which feels like it’s doing a disservice to those who fought it, on all sides, as if they were fighting some phantom foe.

Another challenge is the film’s narrative. It’s not exactly dialogue heavy, and could have easily been produced as a silent film; it may well have actually been improved as an experience if it were produced that way. Nolan clearly wanted the film’s music and visuals do the talking, which it does fairly well, for the most part.

Dunkirk is less epic and more documentary in style. That’s not to say that it doesn’t have some breath-taking moments. At its best, the film’s music and visuals combine to create an almost overwhelming experience on the senses. At times however, the music of Hans Zimmer does seem jarring, and implemented with a heavy hand.

Nolan’s approach to the re-telling of this war, despite its faults, still manages to be a win for cinema. It’s a bold, brave effort that reinforces his position as one of the best teller of stories currently on the film block.