In This Light and On This Evening

There were rumours circulating on the internet that the third album from four-piece Brummie band was going to be a disco extravaganza. Editors cover Kool and the Gang's Celebration! went the cyber cries. Lies, the lot of them. Which almost made us feel bad for starting them in the first place. Almost. 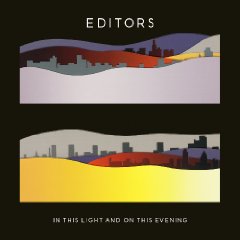 The truth is, no one was really expecting anything that different from the band. But they caught us all out with this one. Where the last two LPs were soaked in guitar riffs and the odd piano tinkle, the third finds them synthing like theres no tomorrow. So, it might not be that much of a jump  more a hop if anything  but it makes a discerning difference to their overall sound.

The opening eponymous track sets the benchmark for what to expect. Singer Tom Smith still manages to sound like he gargles with industrial strength gravel three times a day. Here it broods with intent, lulling you into a sense that all hell is about to break out. It doesnt. However, it may have been too obvious a route if his vocals were suddenly jet propelled into the stratosphere. Still, theres just a little what if? scenario playing over and over in the back of ones head. What it does do, rather cleverly, is let a box of techno bits and pieces build to a virtual crescendo which is just as impressive.

Bricks and Mortar is clearly paying tribute to the fine noises produced by Vangelis. Take away Smiths vocals and youd be left with an instrumental that wouldnt sound out of place on the Blade Runner soundtrack. He couldnt ask for a finer homage.

The recent single Papillon highlights the bands writing abilities. The chorus declares it kicks like a sleep twitch. What does? What the hell does??! And really, is a twitch in your sleep really that bad? Its certainly not in the same league as a sleep cramp  they really hurt.

Another example of questionable lyrics would be on Like Treasure where Smith utters the line you are what you eat, youll become digestive. Now were fairly sure that you would have to eat a shed load of digestives before you become one. And if you do, so what - just avoid tea drinkers and being dunked, no biggie.

Despite the album being littered with odd lyrics, this keyboard tinkering malarkey works well for the band. In places, it does seem to lose its way a bit, but overall theres a real sense of progress. They couldve easily churned out more of the same  which in a sense they have, just with added keyboard coolness  but musically at least, it sounds like a step in the right direction.

Also, with Smiths distinctive style of vocals (describing it as singing may be a step too far), which is about as much of a trade mark for the band as you can get; even if they went all bhangra, his voice would still make it an Editors production.

It wont be to everyones liking (but the fact that it went straight in at number one in the album charts means that a fair few liked it), but if you find yourself trying to get the singles out of your head, replacing them with the album isnt a bad idea at all.