Here’s something that will make you feel old; we’ve now reached a point in history where there are generations that exist who don’t know who the likes of Elvis, Marilyn Monroe and The Beatles are.

Thankfully there are now features to help remind those who may not know, the greatness of these icons, with the release of Peter Jackson’s fascinating documentary The Beatles: Get Back, the recently released Blonde about Marilyn, and this, Baz Luhrmann’s biopic on the king of rock and roll himself. 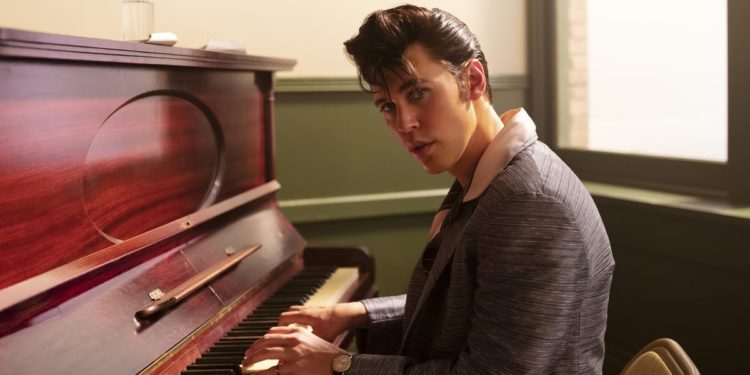 So this first track is called 'Smack my bitch up'...

Lying on his death bed is Colonel Tom Parker (Tom Hanks), recalling the very first day he saw and heard a young kid who would not only change his world, but the entire world.

He would become the manager of Elvis Presley (Austin Butler), and together they would conquer the musical world, but it would end up coming at a price, for the both of them.

Now this shot should make my 'Gram blow up!

Although it feels as if Australian director has been around forever, in a good way, he hasn’t produced that many films, with Elvis only being his sixth since his debut with Strictly Ballroom in 1992.

And although this marks his first biography, we’re on familiar, flamboyant ground, with the kind of glitzy, sparkly environments you would suitably get with Elvis, and indeed Luhrmann too.

And that’s part of the film’s problem; it almost comes across as a parody, like a Vegas show that the king himself put on. In fact it’s all show, and little in the way of substance. Making it more a caricature of not only Elvis, but of the biography genre as a whole.

Luhrmann isn’t even satisfied with the original arrangement of his back catalogue of hits, either only playing brief snippets of them, or altering them completely, giving them a hip, modern twist, with a little rapping on the side. Sure, it’s entertaining, but it kind of takes away from the output of one of the greatest solo artists of all time.

And like Elvis himself was in ’77, it’s on the bloaty side, with a running time of nearly two hours and forty minutes, but it feels as if Luhrmann spends too much time on certain areas of his life, and not enough on others. Certainly the first hour treads water, developing so very slowly, spending far too much focus on the start of his career. Then when it comes to his acting career, and his time in the army, these are the briefest of scenes, over in a flash. It’s no surprise with five writers credited with story and screenplay duties, it’s no wonder it lacks cohesion.

The good news is that Butler is phenomenal as Elvis, it’s just disappointing we don’t get more of him; there’s no denying there’s plenty of hip shaking, and hair flopping going on, but lacking any true sense of what it was like to be Elvis Presley.

Hanks is solid too as the enigma that is Colonel Tom Parker, who as we discover, wasn’t a colonel, wasn’t called Tom Parker at birth, and wasn’t a US citizen. In fact it’s this relationship, that became pretty symbiotic as time went on, that is the most fascinating aspect of the film.

It impresses as a spectacle then, as much of Luhrmann’s work does to be fair, but it sadly lacks a real sense of humanity amongst a myriad of tired camera tricks and quirky musical choices. In fact you could say, a little more conversation, and less action, would have been preferable, thank you very much.