Its difficult not to like Marshall Bruce Matthers III; under his stage name of Eminem  as well as his alter ego Slim Shady  hes seen almost as the acceptable face of rap, if there can be such a thing. Even if you cant appreciate his music, theres something of the entertainer about him. He even did ok with his film debut 8 Mile. 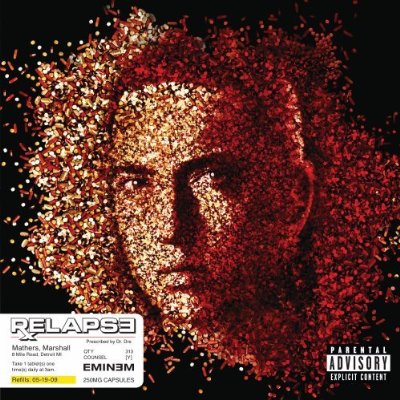 The thing is though, hes one of these artists that is just haunted by a myriad of demons. Before this, his last studio album Encore came out in 2004. Since then, hes been dealing with a drug problem; the on-again-off-again, much publicised relationship with his ex-wife Kimberley (married twice, divorced, erm, twice); and the death of one of his closest friends. In fact, at one point, it looked like we had seen the last of Slim Shady.

However, Relapse  his seventh album  sees the rapper not only back on form, but also seemingly in a better place. The mood is lighter and it feels like he might just be enjoying himself. Possibly too much. In places, it feels like a comedy album, as if he decided to wrestle the crown from 'Weird Al' Yankovic for king of novelty songs. In fact, hes the Krusty the Clown of the rap world; beneath that warped smile is a man who doesnt know how to handle the pain. So what does he do? Release a cream pie of an album.

It doesnt help that there are what are known as skits between many of the tracks, which are supposed to see Eminem in humorous conversations. They may be funny once (if you happen to be twelve), but repeat plays make you hit the next track button hard and often.

So what about the music? Well it certainly has its highlights. Hello wont win him any friends with the feminists of this world, as Shady describes how his pill-popping antics made him feel friendly and, erm, amorous. But it does showcase brilliantly his use of language, as well as his ability to tell a story.

A definite highlight is Medicine Ball which certainly graduates from the school of old. Much of this is down to the doctor in Eminems house, with Doc Dre producing the entire album. It doesnt get much tighter with Dre in control. He even makes an appearance on Old Times Sake, where Eminem gives a heavy nod of appreciation in the direction of the temple of Dre.

Overall theres probably just enough of the man at his best to satisfy die-hard fans. And if youve never bought one of his albums before, but have always been a bit, you know, curious, this is about the best introduction to the many faces of the Shady one that you could possibly ask for. Just be warned though, he does have a potty mouth on him.