Everyone loves splashing about in the water; the sun, the sound of the waves, seeing who can hold their breath just under the surface the longest. Its just more fun than words can say. Until you get stung by a jellyfish and a close relative has to pee on you. The nightmares never go away...

The great thing about playing Endless Ocean 2 is that no one gets peed on. Like the original, this sequel sends you off to the deepest, darkest parts of the ocean on a trail for treasure.

You join R & R Diving Service, run by Captain Birds Eye lookalike Jean Eric, with the help of his grand-daughter Oceane. With you on board, you set out to look into the myth surrounding the Song of Dragons; its a sensitive issue however, as Oceanes father was doing the same thing and died trying. Oops. 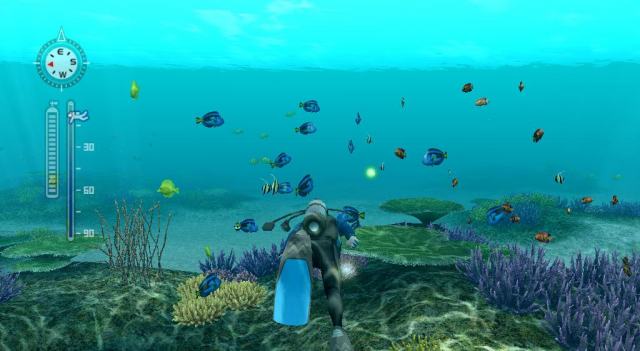 All we need now is to find a chippy, then we've got a great meal on our hands.

This adventure sends you all over the globe, finding clues that will ultimately reveal where the mysterious Song of Dragons comes from, and the treasure that it protects.

And that, in a sea shell, is the plot. However, although the main story is quite short at around ten hours, the game has many more exploratory parts to add to its longevity.

Theres almost a sim-like feel about this sequel, albeit a really basic one. Once you become a part of the team, you get to hang out at their base on Nineball Island. Here you can check on the things youve found; have them appraised by a woman called Nancy  who, incidentally, will also cut your hair for a price; upgrade your equipment; and train a dolphin do some tricks to name but a few.

The first time you get out into the water, the first thing you may notice are the controls. Everything you do is with the wiimote alone. Wed like to say that it becomes second nature, but really it doesnt. Its not too taxing you basically point a glowing cursor in the direction you want to swim, gently squeeze the trigger and, lo and behold, you swim in that direction. Where it suffers is in the level of control. At times it feels like youre just shining a light from a torch onto the screen and hoping for the best.

Where it becomes really fiddly and awkward is when you want to access your map or other items. Your thumb has to jump back and forth from the lower part to the direction pad at the top, and believe us its quite the workout. If you start to notice that one thumb is getting more muscular than the other, you know why. This may work to your advantage in thumb wrestling competitions, but probably nothing else.

The easiest solution would have been to be able to use the nunchuk for movement, and everything else with the wiimote. There is an option to use the classic controller, but we dont have one. Apparently connecting either a Wavebird or original Gamecube controller doesnt help matters either, as we found to our dismay.

The next real problem is the music. Its about as bad as bad can be. Actually, its far worse than that. The game lulls you into a state of calm and tranquillity before unleashing some shrilling banshee on your ear drums. Whoever it is almost makes listening to Katherine Jenkins bearable. With no option to play any of your own music, its a question of playing with the sound way down, or even mute, which is a shame.

The game is certainly a unique experience though. Swimming around in your scuba gear is definitely a relaxing experience. Its quite an education too, if you click on every species of fish, mammal etc you come across, it gives you a little bio on what youve found. This leads to yet another fundamental flaw however.

Whenever you come across, say a fish for instance, you get a prompt to press the A button. If you havent before, a box with a couple of question marks in it will appear, only to be shortly replaced with the name of the fish. Heres the rub. The A prompt will flash up again, if you come across the same fish, but this time youll just be greeted with the name of the fish. However, unless you have encyclopaedic knowledge of all species, and we dont want to appear fishist here, but a lot of them do look the same. These means that youll be spending a hell of a lot of your time looking at info youve already seen several times before. It gets dull. Real quick.

A fun element though is using the multi-sensor to use for salvaging. Its like using a metal detector in the real world, but without getting freakish looks from passers-by. It picks up hidden objects whenever it hovers over them. Some of them will be too heavy to start with  go figure  so you may have to go back with a bigger bag at a later date. You can then sell whatever treasure youve found, and with the money youve made you can then upgrade your equipment etc.

You also get a gizmo called a Pulsar, which can be used to cure sick creatures or calm them down. It adds a sense of danger to the mix, but only a tiny bit, because if you dont manage to calm a vicious shark down in time, all you get is a bar knocked off your air supply, and a bop on the head. Were no Jacque Cousteau (but we have seen Jaws), but we expect slightly more than a bop when confronted with an angry shark in real life. At the very least a nibble.

For some reason theyve also adopted an almost Zelda-like approach to puzzles. However, they havent really got the balance right. Some of them are blindingly obvious, whereas others appear to be a real test of your IQ. In fact the final section set in a temple, decides to use a 10 minute countdown to escape the ruin, but first you have to try to understand some truly random hints. Good luck with that. And trust us, it will be down to more luck than judgement when/if you manage to escape.

You cant blame the developers for at least attempting to do something different from the first game, but by veering so far away from it, it feels like theyve entered into decidedly choppy waters.

Despite its many faults, Endless Ocean 2 is at least a breath of fresh air when compared to the forced diet of mini-games that the Wii often gets fed. Its also an experience unlike any other, and you wont find anything like it on any other console either.

Its not one wed necessary see people spending hour after hour on, but as a colourful distraction from more action-packed titles, its definitely one worth dipping in and out of from time to time.