To all intents and purposes, Daniel Radcliffe’s career should be over.

Being a child star should be known as suffering from LRS - Logan’s Run Syndrome; as soon as a young actor hits puberty, their career dies.

Radcliffe has proven to be quite the rebel however, resisting hard against his own LRS since his Potter days, by developing into a serious, mature talent.

Here he stars in a film based on Tim Jenkin’s 2003 book Inside Out: Escape from Pretoria Prison, which features his unbelievable account of his remarkable prison break. 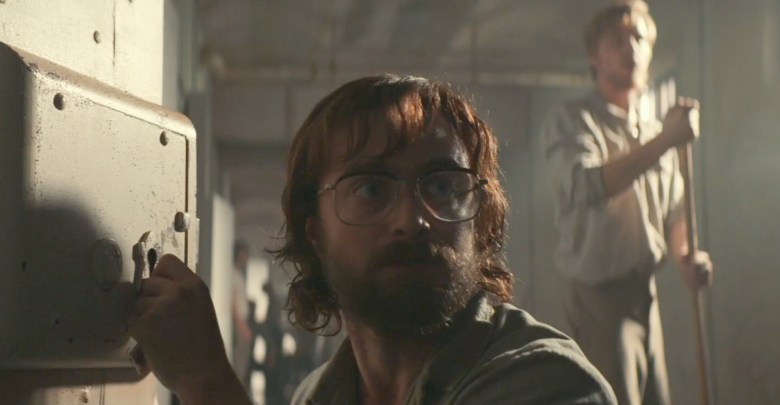 Its really sad to see The Crystal Maze go down hill like this.

South Africa, 1978, and the country is still suffering from the injustice that is apartheid. But despite all the power it gives the white population, there are still a few dissident voices coming from the non blacks.

Tim and his friend Stephen (Daniel Webber) are two such white South Africans, politically motivated to fight against apartheid. But when even just handing out leaflets is seen as illegal, getting the word out is no mean feat. One way they set out to achieve their goal is by loading bags full of leaflets and getting them to explode on the street, for passers-by to pick up.

Although a victimless crime, the pair still manage to get caught, and are sentenced as ‘leaflet bombers’ for a combined time of 20 years.

They are sent to a whites only prison in Pretoria, where, along with real criminals, are other political prisoners incarcerated.

It doesn’t take them long to come to the conclusion that they won’t be staying long, as they conceive quite an audacious plan to not so much break out, but one that will open up doors to their escape. 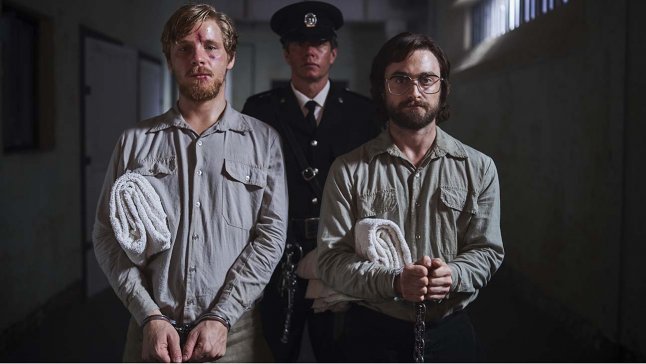 Not everyone got behind the initiative to save water by showering in twos.

Escape from Pretoria is one of those films that is made even more incredible by the fact it’s based on an actual event. To that end, the story is the driving force, and quite rightly.

British director Francis Annan however, does well in setting the scene, as well as building the tension, of which there’s plenty. It is the kind of film that will have you involuntarily holding your breath, as the distant sound of footsteps can be heard coming ever closer.

Radcliffe, now thirty, gives yet another solid performance. He is developing into one hell of a character actor, with his role here certainly serving as an impressive stepping stone to further greatness. His strength is certainly in the subtleness of the role. He could easily have gone big, and made the entire film about him, but he has more class than that, and, more importantly, more respect for Tim Jenkin himself.

Also, in possibly underplaying his part, he allows the story, which is king, to carry the audience on this gripping journey.

Perhaps the script, and in particular the dialogue, could have been sharper and more entetaining, but this isn’t a remake of The Great Escape, and shouldn’t be treated as such.

Annan’s impressive film is just what you want from a prison break flick – edge of your seat stuff. Tension is key, and Annan keeps turning it ‘til you feel something’s got to snap.

As for Radcliffe, yet another unusual project for him that he’s successfully nailed, further proving himself to be a major British talent, and of that single fact there’s no escaping.