It really feels like nostalgia has been the new black for quite some time. Over the last few years hundreds of hours of TV have been devoted to shows wallowing in retro-ness, harping on about how great this decade or that decade was.

The eighties, in particular, are often singled out for being a great time for music, TV and film. Sure, there was some good stuff around back then, but people very quickly forget about the amount of woeful drivel we had to put up with. Luckily for us, Sly and Arnie have made a film together that evokes everything about a bad eighties flick.

Prisons, by their very definition, are pretty hard to break out of. If they weren't, that would probably just make them hotels for the criminally inclined. Someone who knows a lot about prisons is Ray Breslin (Sylvester Stallone). More specifically, he knows a lot about breaking out of them. He does this as part of a security consultancy firm, hired to test how secure various prisons are.

An offer soon comes his way, which his business partner Lester (Vincent D'Onofrio) thinks is too good to let pass. A representative of the Federal Bureau of Prisons likes Ray's work, and want to pay him handsomely to try out their ultra-modern facility. Although he gets a bad feeling about the whole thing, he agrees.

As a precaution, his team put a tracking device in him, just to be on the safe side. But when Ray gets taken, his abductors also remove the tracker, so when he wakes up, he's very much on his own.

Ray decides to tell the warden of the facility, Willard Hobbes (Jim Caviezel), that it's all some terrible mistake, but Hobbes isn't having any of it.

This institution is unlike anything Ray has ever seen. It may be start-of-the-art, but it won't stop him from attempting to break out. He'll need some help though, so it's lucky for him he meets the prison's go-getter Enil (Arnold Schwarzenegger). With his help, Ray begins formulating a plan to break out of what could possibly be the most secure prison in the word. Or is it?... 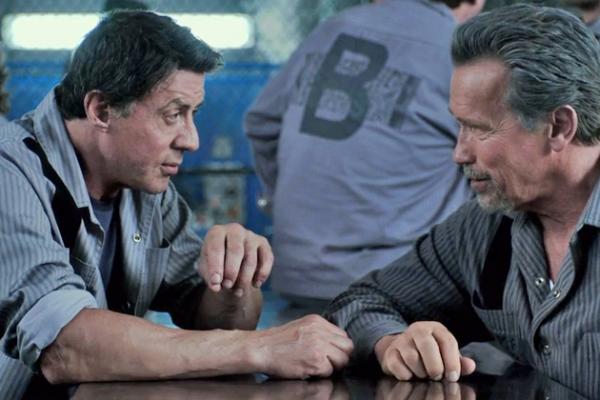 Listen Arnie, it's my film so you have to play my prison bitch. Those are just the rules.

It's fair to say that this bulky pair made some of their best films in the eighties, but they also made a few stinkers too. This then, falls into that latter category.

With a combined age of 133, it's not so much a case that Sly and Arnie can't do action films, more of a case of do audiences really want to see two old codgers attempting to play the hero? Granted The Expendables series is fun and enjoyable, but it works more for its novelty value of starring a collective group of aging old action stars. This film doesn't have quite the same appeal.

But it's not just its two stars that make this feel like a throwback to the bad old days of the eighties. It has a story that has straight-to-DVD written all the way through it, with the kind of high concept expected of that decade. Back then the pitch of 'Sly and Arnie try to break out of the world's most secure prison' may have been enough to make their fans salivate with excitement, but in the here and now, it's more likely to have them dribble with apathy  either that or the medication is just kicking in.

It doesn't help that they've got a truly mediocre director by the name of Mikael Håfström, who may direct with the enthusiasm of a competition winner, but the experience of one too. Maybe they thought they were getting Lasse Hallström instead, and didn't realise their mistake until it was too late.

It's also disappointing to see someone of Sam Neil's calibre in a small role; even more so when Vinnie Jones, who continues to bluff his way through having an actor career, has a more substantial part.

Hindsight does have its merits, certainly in this instance, as it allows forewarning as to the total badness of this film. So if you still plan to see it, you can't say you haven't been suitably warned.