When a man is tired of the open world game, he’s tired of life. Samuel Johnson said that in 1777. OK, we’re paraphrasing, as he was actually talking about London, but it’s the same principle. But you just know if anyone appreciated the open world genre, it would have been writer Johnson; you can just imagine him losing his academic shit playing Watchdogs: Legion, roaming the virtual streets of London, hacking skills at the ready.

Of course no one knows an open world game quite like Ubisoft; not only are they responsible for the Watchdog franchise, but also Assassin’s Creed as well as this long running series Far Cry, of which this, as the numeric in the title suggests, is the sixth entry. 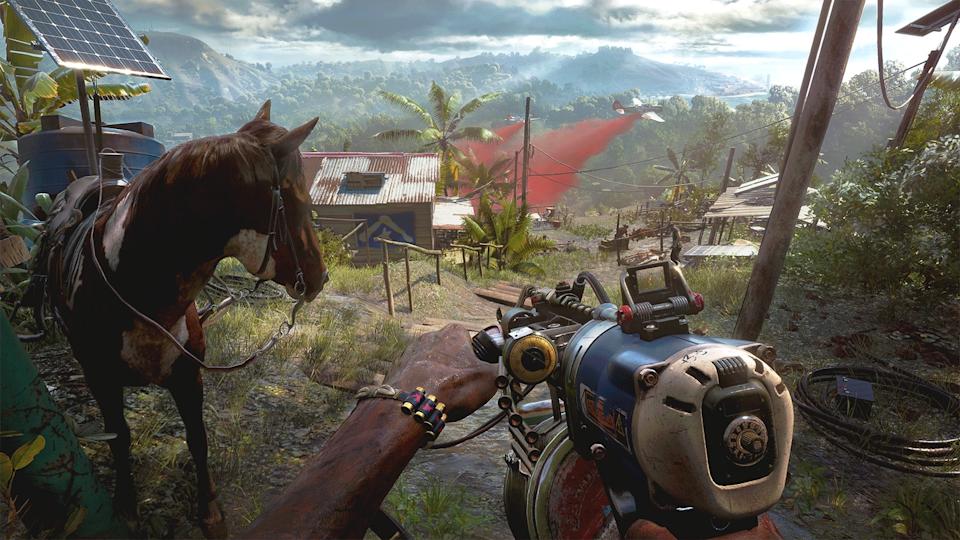 Now this is the bad boy Nick Knowles wants on DIY SOS.

Welcome to Yara, a sunny Caribbean island, full of character. It would be the perfect holiday destination if it wasn’t for its pesky dictator Castillo (Voiced by Giancarlo Esposito), who has a vision for the island that very few of its inhabitants share. It possibly has something to do with his use of extreme force and violence, which never goes down well on Tripadvisor.

But Castillo doesn’t have it all his own way; there is a growing liberation movement on the island that is making its presence felt. Its newest member is Dani Rojas, a former conscript in the Yaran military, who has returned home to find that the guerrillas are keen to utilise Dani’s unique skills in the fight for freedom.

The scene is set then, for an epic adventure on Yara. Of course if you’re familiar with the Far Cry franchise, you can jump into the open world nature and embrace it like an old friend. It’s a world full of discovery and exploration, with 34 square miles of island to explore, so make sure you’ve got comfy shoes.

Oh, and you’re going to need guns too, lots of them. Although the locals are friendly enough, Castillo’s army has a policy of shoot first and ask questions later, which isn’t terribly diplomatic of them. So as they aren’t exactly responsive to open dialogue, expect a shootout or three. 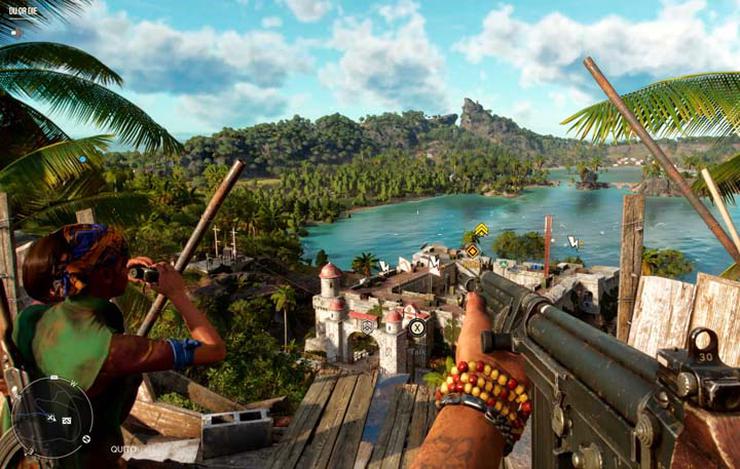 So that's exactly where that guy is who sold us this duff time share property, right?

This is where one of the first new elements of gaming are introduced to the series, with a number of new weapons at your disposal, known as Resolver weapons. These are the type of weapons that you wouldn’t necessarily see as standard military issue, as they include a nifty nail gun, as well as truly groovy weapon that fires deadly CD’s whilst playing the Macarena, making them highly unconventional and hugely entertaining.

On top of these new quirky weapons, a number of backpacks with different abilities have also been introduced. The Supremo is an incredibly useful addition to your arsenal, which, depending on the layout you choose, can fire deadly homing missiles, to firing off gases that make the enemy turn on one another. It’s certainly a welcome addition, and one that you will soon find you can’t live without.

There are also other little tweaks to the gameplay, like the ability to recruit locals to your cause, and then send them out on expeditions to earn you rewards; it’s pretty much the same mechanic that was utilised in Assassin’s Creed IV: Black Flag, where you could send out crew members to pillage and whatnot on your behalf, but it works remarkably well here too.

There’s no denying that these new additions strengthen the overall gameplay of the franchise, without messing with the formula too much. Fans of the series will still be able to take out outposts, go hunting, go fishing etc, just as they have in previous titles. These new additions however just give you different ways to tackle the main and side stories however, which can only be a good thing.

And for the first time, the franchise introduces a buddy to join you on your travels. Once unlocked, you can have an animal companion who not only follows you around, but can also help in acting as a distraction, or simply go and attack an enemy. Just be aware however that they aren’t invincible, so you do need to keep an eye out for them occasionally, as they can fall in combat and may well need your assistance to get back up again. They’re not essential for your campaign, but they definitely deliver on the cuteness front.

One of the more unintentional aspects from these changes however, is how the game now resembles another franchise, that of Just Cause. If you choose to play as the male version of Dani, you can’t help but feel that there’s every chance he’s a distant relative of Rico Rodriguez; Dani is equipped with a grappling hook, parachute and wingsuit, just as Rico is, tasked with blowing up as much stuff as possible. On a Caribbean island no less. If ever there was an opportunity for a crossover for two franchises, it would be here.

Despite all these changes however, there’s no denying that this sixth instalment is very much a part of the Far Cry franchise. There are murmurings from certain quarters of franchise fatigue, but they’re kind of missing the point; a franchise is supposed to be familiar, allowing gamers to simply jump in and enjoy all the hard work the developers have put into it. And of course it’s good to add new elements to it, as they have clearly done here, but you wouldn’t want to tinker with it too much. Besides, the franchise has its own spin-off franchise for exactly that, with titles like Blood Dragon, Primal and New Dawn, allowed to bring something new to the Far Cry table.

Far Cry 6 then is exactly what you want from a Far Cry title; it’s a sprawling, epic adventure, giving you the freedom to play out missions as you want, whilst giving you the time to explore every lush nook of the island, where there’s every chance you’ll be distracted by a spot of fishing or hunting, or be sent off on some foolish treasure hunt.

It is a game to lose yourself in, to take in the many sights and sounds of Yara, an island of incredible beauty and detail, for what is a truly immersive and impressive gaming experience. Viva the revolution.