We were kind of spoilt for football this year: not if you were an England supporter of course, but watching the very best of the beautiful game in Brazil for the World Cup.

It got us excited about playing football again. Not in real life of course, that would be stupid  who wants to chase a ball around and around on grass? After all, we're not dogs. Thank the heavens then for video games.

Believe it or not, EA have now released over twenty iterations of their FIFA franchise, which dates back to 1993. Despite the annual release of, essentially, the same game, the franchise is the most successful sports video game franchise in the world. Yes, even more popular than PDC World Championship Darts.

To date, EA have sold over 100 million copies worldwide - so it's no wonder that they continue to release it on an annual basis. 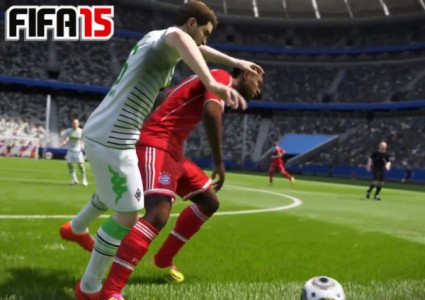 It shoots, it scores! But was it over the line?

That said, we've gotten a little tired of the series in recent years; the cover star may change occasionally, but the game itself hasn't. It's no surprise that although we've skipped a few years of playing it religiously, picking up the controller and playing FIFA 15 felt like we'd never stopped playing. To a certain extent that's part of its charm  its pick up and play playability  but it doesn't say much for its evolution.

Ok we admit it, it looks incredible: it looks suitably next gen, which is something at least. As the game loaded, we were invited to play as Liverpool in a friendly. Now, nothing against the great city of Liverpool and its famous team(s), but it's not a side we'd normally pick. But we were feeling brave and went with it.

Not long into the game and we scored a goal. It actually came off of a defender and sent the goalie the wrong way. Nice. We carried on. We scored a further goal  or so we thought  but it was deemed not to have crossed the line. As the game continued, we grumbled that if this was so bloody next gen, it should at least have goal line technology. And then, as if hearing us, the commentator interrupted and said that we can look at the attempt at goal using... you guessed it, goal line technology. We love all kinds of pie except the humble variety.

After it finally finished flopping onto the hard drive, we did what we usually do playing FIFA  hit the championship and play as Nottingham Forest. That's right, you can keep your Barca's and Real Madrid's - after all, where's the challenge in that?

So then we went on our merry way getting our team promoted to the Premiership. We like to play through as player manager, but that option has been sadly dropped for just one or the other. So picking manager, we started putting together an unbeatable team. 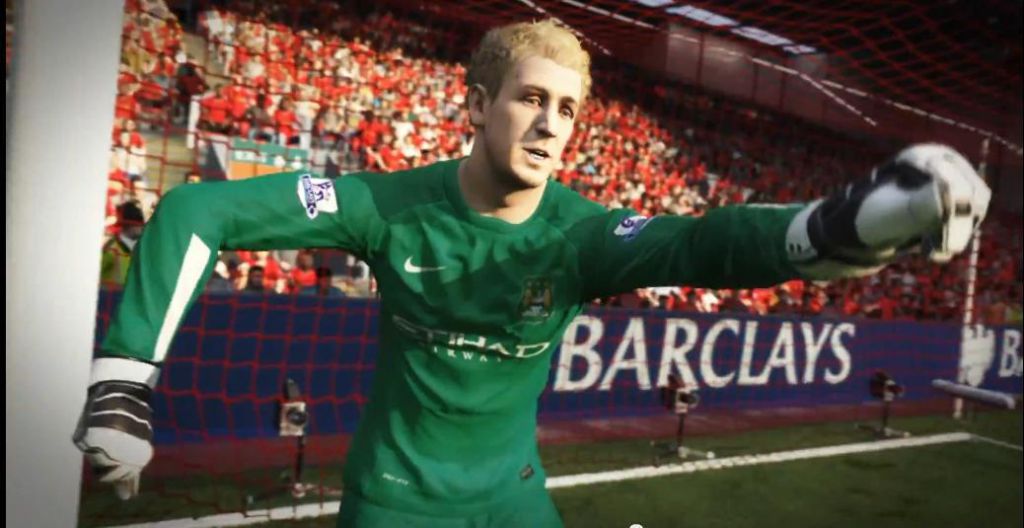 The latest FIFA update sees Rodney from Only Fools and Horses in goal for Man City. What a plonker.

Playing the game is just like driving; it may be sporting a new sleek look, but when you get inside everything is still where it's always been.

So no big surprises on the pitch then. What caused more huffing and puffing more than anything else was the menu. To this day we're still annoyed that every time we load the game we have to choose the language. Seriously, how difficult is it to remember? You would think that a next gen console would at least be able to handle that. Apparently not.

It may be an attempt to at least look as though something is new, but the main menu in this game is an ugly beast. EA have crow-barred so much into it that you now have to search through sub menus on the page by using the right thumb stick. This wasn't immediately apparent, and led to the kind of strop we try to avoid here at Boom HQ, for health and safety reasons more than anything else.

The anger would manifest itself from the simple act of saving. We'd play through four or five games on the trot, save our progress and move on. Next time we played the game, our progress was nowhere to be seen and we had to start from scratch. We put it down to player fail, and carried on. Again, it wouldn't save. Now it probably tells you in the FIFA 15 manual, but our review codes come with no instructions.

It was only after a bit of fiddling on our part (steady) that we came across a sub menu that quietly stated 'load game', where all our saves had been languishing, cooped up in isolation like Julian Assange in an embassy. Thankfully this find came at a point where there was still hair yet to be pulled, which was some consolation.

After a while we got a bit bored playing in the Championship  playing the likes of Rotherham and Huddersfield home and away will do that to you  so we headed for the bright lights of international duty. Unfortunately the lights weren't as bright as we had hoped, as we struggled to find it. You can play a quick match in international mode, but if you want to play in career mode, you have to perform well enough as a manager that you might be considered for the job. So if you're after a quick little international tournament, forget it, you can't.

Something we hadn't got to grips with before is Ultimate team. From what we could make out it's a little like a footie version of Pokémon; you get to collect and trade players as you strive to build the ultimate team. It's a pleasant enough distraction, although the amount of detail it goes into is borderline mental. What's even more frightening is that apparently this mode is proving highly popular. Gotta catch and kick 'em all.

To be brutally honest, FIFA is a franchise that really should be released every other year, as there clearly isn't enough fresh content to differentiate it from previous releases and warrant a purchase. But considering the coinage that EA are making, that will never happen.

If you ever manage to get past the incredibly cluttered menu system, there lurks a beautiful rendition of the beautiful game. It will still frustrate many of course, for different reasons; the penalty system is still too awkward for our liking and feels like a mini-game wedged in somewhere it doesn't belong, and the opposition's defenders always seemed more competent than our own, but these are the kind of annoyances that EA will iron out by FIFA 2031 or thereabouts.