As a franchise goes, EA's FIFA is, somewhat admittedly, narrow in terms of expansion. It's not like you could take one of its annual cover boys and turn them into FIFA Messi Kart, or FIFA Rooney Land. That said, it's probably something EA are seriously considering after the fact that the likes of Rooney, Theo Walcott, Petr Czech and James Milner can be used as playable characters in the latest Tiger Woods game.

FIFA Street however, is a more natural progression from the main FIFA brand. After all it's a football game, although not one as we know it.

Despite the title being slightly misleading  there are no jumpers for goalposts in this game, and no matches are played on an actually street  the game does work as a standalone title from its FIFA big brother.

There are actually a surprising number of different types of game available here: there's your general five-a-side; then there's your panna rules where you're rewarded for getting past your opponent as well as for scoring goals; futsal relies on skill and ball control as there are no walls to play the ball off of; last man standing sees you lose a member of your team with each goal you score until you can beat your opponent with one man left; and then there are custom matches where you can pretty much make your own set of rules up on how you want the game to play.

Game play however, stays the same throughout. Using a large array of skill moves, you have to get past your opponent and score the most goals. In this regard it's less a tactical game and more about who can showboat the best. If you're a hardened believer in just getting the ball in the back of the net any which way, then this game is probably not for you. 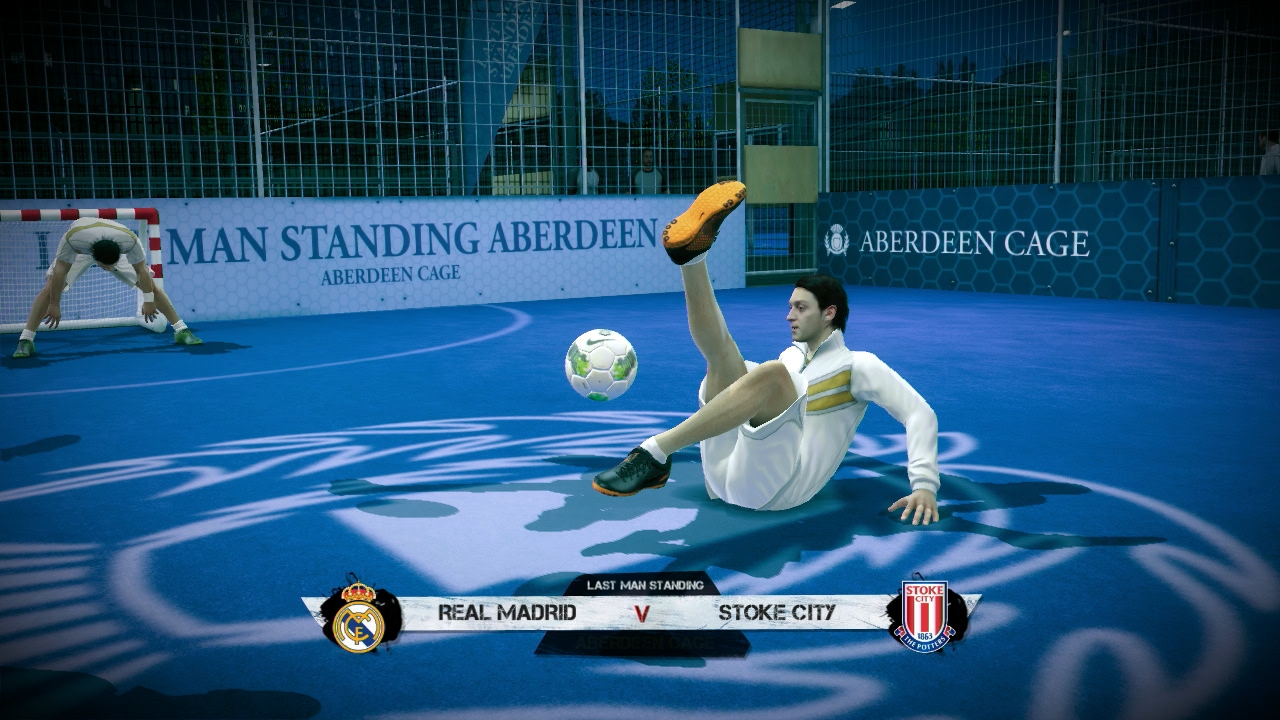 And this is my shadow puppet of a swan eating a football. Graceful, no?

This game is like the Harlem Globetrotters of footie games. It has a myriad of tricks waiting to be unlocked, but part of the problem is being swamped with so many and trying your best to remember all the buttons/shoulder combos necessary to pull them off. Unless you have Rain Man like memory abilities, you may struggle in places. Of course when you do manage to pull a fancy move off, it's difficult not to get swept up in a wave of emotion. But you are soon reminded that is was more likely through luck than judgement.

The AI can also throw you off your game. In places they can show you just how the game should be played, and then they stand directly in front of the goal mouth and inexplicably miss. It's the kind of miss that even Torres could manage to score.

It also has a tiring upgrade system for your players. It seems like every five minutes you have to go through every player on your team and decide which attributes to increase. What's desperately needed is a one button upgrades for all abilities. Not that the upgrading serves much of a purpose, as there doesn't appear to be any discernible difference in the ability of your players afterwards.

It's just a shame that the game is so skills focused. Nobody really cares about doing what are ostensibly clown tricks with a football  unless you're Cristiano Ronaldo of course. And what makes it more infuriating is that you only have two basic defending moves, both of which rely on you sticking a leg out and hoping for the best, in which to attempt to win the ball back.

But if it's possible for a game to have energy, then this one has it by the bottle. Besides futsal games the ball rarely goes out, making it end to end stuff. Games can build up a real rhythm within them that can soon become quite hypnotic.

It's not a game for purists, but this re-boot of the tired FIFA Street franchise does its best to re-invigorate the beautiful game with flair and spectacle. It's also a football game you can play on line where you won't be confronted with Barcelona game after game, because you can't, which is a minor blessing.

If you fancy a change in pace and style from the usual FIFA kickabout, this could be right up your street.