It's unlike the behemoth EA to be shy about releasing games on any format, but they've been incredibly reserved when it comes to launch titles for Sony's new shiny handheld. In fact they've only gone with one title: FIFA.

What's even more incredible is that this is more than just a straight port of the console game; it appears that due thought and consideration has gone into their all-conquering footie title.

This is certainly great news for us, as we have fallen out of love with FIFA 12 of late. It's difficult to actually put a finger on why, particularly when it's as polished as it is, but it hasn't jumped off the shelf and shouted "Play Me!!!" in quite some time.

Strangely enough, we've been getting our football fix elsewhere. It's true, we've been having an affair with none other than FIFA 12 for the iPhone. Crazy we know. Despite having to control our team by smearing the fluids from our greasy mitts all over the screen, the iPhone version is surprisingly comprehensive. What's more, it's fun to play.

So we can understand EA wanting to make an impression with their premium sporting title on the Vita.

But here's the irony  although the Vita boasts front and back touching action, our preferred method of control is the standard left analogue stick and right buttons combo. And this is something that we've found with not only this title, but other launch games too. The problem is, if you have the opportunity to play a game without having to touch the screen, chances are you will. After all, as playing games on other portable touch screen devices prove, having your fingers covering up the screen isn't an ideal method of controlling anything.

We're sure EA have done a great job in getting the touch screen mechanics just right  they certainly work well for the iPhone version  but the advantage console games have over these devices is a dedicated control system. So with the Vita's superbly intuitive analogue sticks, why on earth would you want to cover up parts of the screen with fat fingers? 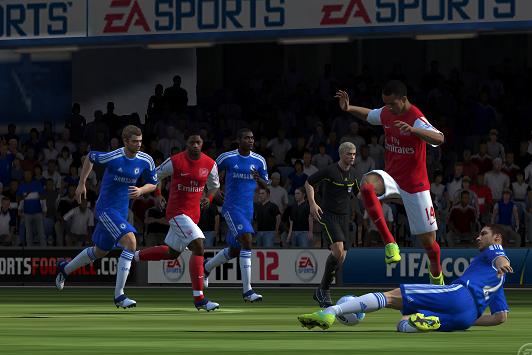 Hey, look at me guys, I can jump with the grace of a gazelle. Cool huh?!

But we digress. There are two essential points to make about FIFA Football on the PS Vita. The first is that it makes the beautiful game look really beautiful. You may have to play around with the settings a bit, as the default camera has the ball about a pixel big, which means the ball pings across the screen like the ball in Pong. But once you've found one your happy with, it looks pretty gorgeous. And yes, you'd be hard pressed to find that many differences from its console cousin.

The second point, and possibly the most important, is its playability. Even though we don't care to touch the screen, the game has an immediate pick up and play likeability to it. It's probably aided by the fact that it mirrors the console version so closely, that it simply plays like a portable version of the console game. Despite the controls being micro-sized, the layout is exactly the same.

The most interesting difference to us however, is that this handy version feels more fun to play. It has a little more pace about it than FIFA 12 does, making it that little bit more enjoyable to play. The only real annoyance was the use of the rear touchpad; the back of the device is the natural place to rest your fingers, but with the rear touchpad on, it means that as soon as your player on the ball reaches the final third of the pitch, if your fingers touch the pad, he'll shoot in that direction. Thankfully there's an option to turn the rear pad off. It's a shame that there wasn't a little half way house however, as it would have been nice to have the choice to be able to use it for penalties at least, where it would probably work in its favour.

On top of all this, the game has an impressive amount of modes, including the return of Be a Pro mode from FIFA 11, which actually works really well in the palm of your hand. Add tournament, career and Be a Goalie mode, as well as online head-to-head and you have a completely comprehensive portable kick-about to take on the go.

If you [heart] FIFA on the consoles, then you'll absolutely [heart] the hell out of this version.