Now is really not a good time for football haters. With the World Cup finally here, it must be a like being a hay fever sufferer during a high pollen count, with balls flying in the air everywhere in South Africa. If its any consolation, its hardly a good time for fans of the bigger teams either, many of whom appear to be struggling. And lets not even go near the England team.

Thank God for EAs FIFA then, for allowing us to hopefully send our teams to that glorious final, even if its only virtually.

Diehard fans will already be familiar with this game, as it has been out for a fair few months now. But with most of the world swept up in the footie frenzy, what better time to throw on your countrys shirt and kick your team towards footballs greatest prize.

Unlike its 2006 predecessor, this game actually includes the qualifying matches for all the teams, as well as the finals themselves. These means that whats on offer here is the complete World Cup experience.

Another advantage it has over 2006 is that it runs on the funky FIFA 10 engine, but with a few more bells, whistles and vuvuzelas thrown in for good measure.

Thankfully the 360? dribbling system is still intact, giving it a more fluid approach to passing the ball from player to player. Most of the changes are superficial, with most of them being hardly noticeable to FIFA 10 pros. Except one: penalties. 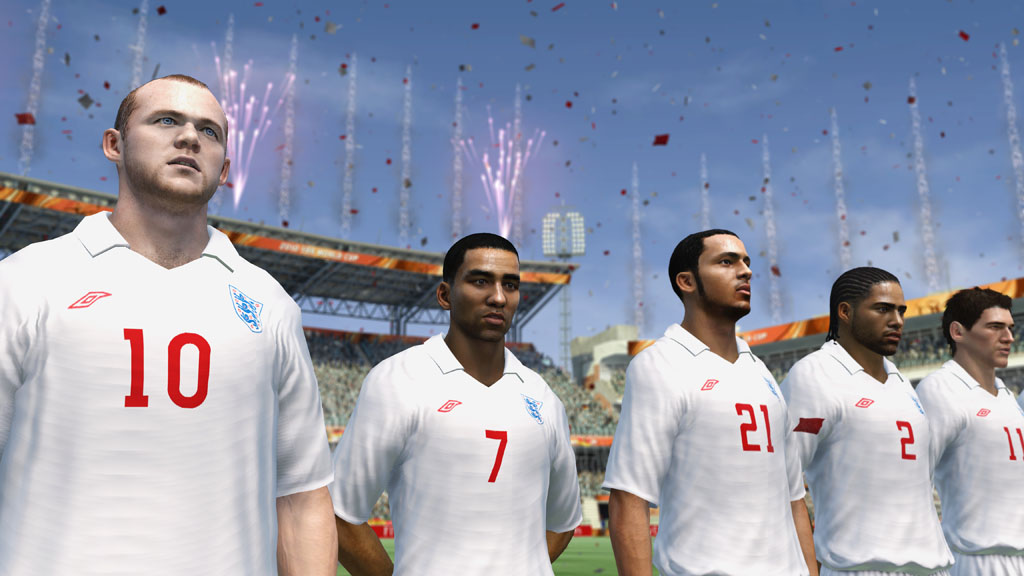 After England's early exit for the world cup, here they are sporting this week's lottery numbers. Be lucky!

There will probably be a Glee affect with the new system, with you either loving or hating it. We openly hate it. EA have turned something that had a feeling of skill about it into some sort of mini-game; players have a meter system to contend with  a little like golf games  where you have to stop the needle in the middle of the meter to make sure your player is in a composed state to take the penalty. You then have a brief time to apply power. At this point, with the aiming system on, you can then move your cursor into an area of the goal where you hope the shot will go.

In open play however, the aiming system isnt available and youre very much on your own. The result is pretty much the equivalent of trying to find the g-spot while making love in 15 seconds or less. Now we love football, but with our poor penalty conversion rate, were no Mr lover lovers. And with so many of our games going the distance, we didnt manage once to hit that elusive g(oal)  spot. And yes, we did limp off feeling very disappointed.

We also found ourselves shouting at the TV as if we were really watching England play. Whoever we played against, they always seemed faster on the break against Englands back four. And yet when we broke, their defence managed to brush the likes of Rooney off the ball with ease. We also noticed that when one of our players in automatic mode was running at speed at the ball holder, as soon as we clicked to take control of the player, he would immediately slow down on his approach. Did we not like that.

Still, even with these minor nags, its difficult not to appreciate the amount of tlc that EA has clearly spent on this title. With the managerial side missing, due to dealing with national sides, the game has a more arcade-y feel about it. Its all about picking up the controller, hitting the start button, and getting well and truly stuck into the action. Whats more, EA have introduced a new two button control system that means that someone who has never played a FIFA game before can pick up a controller and compete on a fairly level playing field with someone more experienced. In other words, you can get beat by your mum.

The most obvious reason for playing it now is that one of the modes is Story of Qualifying. Not only does it contain scenarios that have happened in the lead up to the finals for you to recreate, but also ones from the finals themselves. So you have the chance to make an impact on a match, unlike Capello, and take that donkey Heskey off and put Crouchy or Defoe upfront. Obviously it wont have any bearing on the real competition, but it just might make you feel slightly better. And as a bonus in this section, gain enough points and you can unlock the 2006 World Cup Finals in Germany. Get in!

The fact that theres a real sense of immediacy playing these scenarios is really compelling. Many of these matches are still fresh in our minds, so the feeling of actually taking part in them and having an influence on the outcome is quite a thrill. Unless you play as England of course, as its likely to be the same result.

The online mode will also see you returning to the scene of football crimes, where you can properly take on the worlds best. Be warned though, some of them have been practicing. A lot.

And even when the finals are but a distant memory, 2010 FIFA World Cup still has enough replay value to have you going back for more. It may not be that different from FIFA 10  after all, it is just another footie game  but with all the care and attention thats clearly gone into it, it really does deserve a place in your gaming collection. Just cross your fingers that your games dont go to penalties...