Very few actresses truly make it in Hollywood, but it’s easy to remember the names of those that did. Garbo, Monroe, Hepburn and Bergman are such examples. Gloria Grahame came very close to joining them.

One of Grahame’s earliest roles was appearing in the classic It’s a Wonderful Life, where she flirted outrageously with the squeaky clean George Bailey. Then she became the classic femme fatale in a number of film noir pictures, including Fritz Lang’s The Big Heat. She also picked up an Oscar for her role in 1952’s The Bold and the Beautiful.

And yet her career never went to the next level of stardom.

In the late seventies, she found herself in London, doing theatre work, which is where director Paul McGuigan’s film finds her. 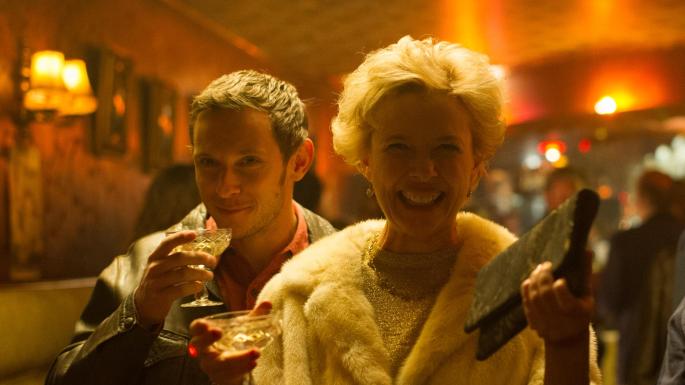 No, I don't know who they are either, just smile!

Peter is immediately taken by this glamorous character, but because he’s at least half her age, isn’t fully aware of background. It’s only from hanging out with her that he realises, mostly from those around them, that she was a screen siren back in the day, who had worked with the likes of Bogart.

They fall in love, and Grahame soon finds herself in Peter’s home town of Liverpool, which is about as far away from Hollywood and all its glitzy trappings as you can get. But just like many of the film noir pictures she appeared in, their relationship was heading for an unhappy ending.

McGuigan’s film is based on Peter Turner’s memoir of the same name that is a fond look back at the relationship he had with the Hollywood actress. Bening is superb as the fading star, still enjoying the attention that performing brings, long after the spotlight has left her. She is flattered by the attention of a handsome, younger man, and Peter seems to have genuine feelings for her.

It is a gentle, touching and believable relationship, with very few obstacles. And that’s part of the film’s problem. The pair don’t encounter any real resistance, which leaves the film, rather disappointingly, devoid of any real drama.

In fact McGuigan quickly brushes over the really interesting parts of Grahame’s personal life, which involves her being married four times – including to director Nicholas Ray – having three children of her own, and a stepson with Ray, whom she ended up marrying. Despite this film obviously being based on Turner’s relationship with Grahame, their story is mediocre in comparison to Grahame’s earlier life, which sounds as if it would be far more the fascinating watch.

Still, there are some strong performances on show here – none stronger than from Bening – with an impressive supporting cast that includes Julie Waters, Kenneth Cranham and Stephen Graham.

Overall though, this film doesn’t quite live up to the expectation of being something special, much like the star herself.