Once upon a time there was a company called Apple, which was founded by Steve Jobs and Steve Wozniak. They released their first computer in 1976 – the Apple I – which was designed and hand-built by Wozniak. It went on sale for $666.66, selling around 175 units in 10 months. The rest, as they say, is history, and a very lucrative one at that.

In August 2018, Apple became the first company in the world to record market capitalization of $1 trillion, and then two years later become the first publicly traded US company to surpass $2 trillion. In short, that’s a whole lot of Apples sold.

It’s no wonder then that they have jumped on the lucrative streaming wagon, with their very own Apple TV+, with its own original film division. Although still in its infancy, this Tom Hanks vehicle is their tenth feature, and it could be argued it’s their best to date. 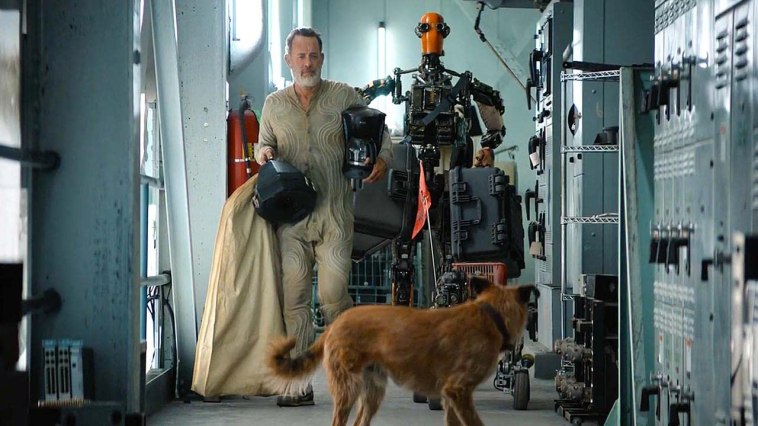 No no, we're going glamping, it's nothing like camping, trust me...

As expected, not enough was done regarding the dangers of climate change to our planet, and a solar flare has completely destroyed what was left of the ozone layer. Earth is now suffering from huge levels of ultraviolet radiation, meaning those that survived, can’t venture outside without protection.

Living on his own in St Louis is Finch Weinberg, a robotics engineer who lives with his dog and helpful robot Duey. He’s lucky enough to be living in the building he used to work at, so still has access to all the equipment, which is useful as he has a special project in mind.

Finch decides to build another robot, but one that is more sophisticated in design and purpose. This one will have legs for a start, a body, arms and head, as well as the ability to not only talk but learn.

He manages to get it finished, in a fashion, before a big storm is about to engulf them, that could last up to forty days, which would essentially kill them all. So Finch decides a road trip is in order, choosing San Francisco as the most appropriate destination for the four of them. So they quickly board their RV and hit the road, not knowing what lies between them and their West Coast objective. 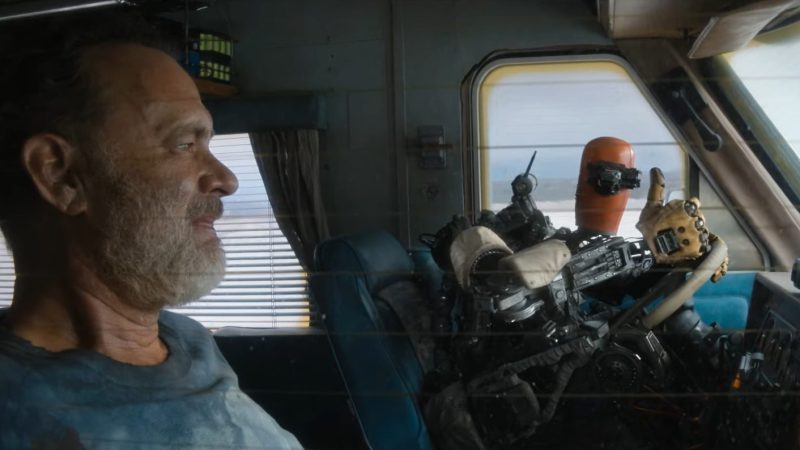 Hey Hanks, show some love for my Insta will ya.

If the US had national treasures, then undoubtedly Tom Hanks would be their most treasured. Due to his supreme likability and his incredible acting talent, a film project with his involvement is in the safest of hands. Who else would be given the opportunity to virtually be the only actor to star in a film, with his co-star being a volleyball, for nearly two and a half hours? But that’s what Hanks did in 2000’s Cast Away.

It’s a testament to both his ego and his talent that he does it again here, with this highly engaging sci-fi tale. Hanks is the only human element in this film, and playing opposite two robots and a dog, is quite an ask, but not for Hanks; he interacts with all his companions in such a way that there feels like a genuine bond and connection between them all.

He certainly gets a lot of help from his latest robot protégé, motion captured and voiced by Caleb Landry Jones, who gives an incredible performance, considering all the restraints. It’s his relationship with Hanks that is key to the film throughout, that ultimately delivers an emotional weight that is surprisingly powerful.

British director Miguel Sapochnik, who has spent the last decade directing a fair few of the biggest US TV shows, including a number of episodes of Game of Thrones, certainly impresses with his larger canvas – and no doubt hefty budget – with a stylish take on a post apocalyptic world.

The star of the show however, other than Hanks obviously, is the design of his new robot pal; he has the kind of design that you can just imagine those brain boxes at Boston Dynamics scribbling in their notebooks over, with the intention of bringing him to life for real. In a sense he’s the spiritual successor to Johnny Five, but with better diction and hand co-ordination.

It’s also nice to see Sapochnik’s nod to 1972’s classic sci-fi Silent Running. Not only is Duey a reference to one of that film’s adorable robots, but it also features the same theme of one human building relationships with the robots around him in isolation, with a similar outcome.

For a film that has considerable scale, Finch is a very simple tale; a man and his companions go on a road trip. Sure there’s a reasonalbe amount of peril along the way, but even then these moments are used to strengthen the bonds between all the main characters.

Although it’s a post apocalyptic world, featuring some impressive technology – and a very cute dog, it has to be said – the film is remarkably touching and heartfelt, that will take you on a journey with what many might consider an unexpected ending.

Hanks is in supreme form, and does well to hold his own against a formidable cute cast comprising moistly of CGI and a waggy tail. But you wouldn’t expect anything less from a national treasure.

Finch is a film that despite dripping in technology, is awash with emotion throughout, examining what it is to be human as it does. It has Tom Hanks, quirky robots, an adorable mutt, but most of all it has heart, and you can’t ask for more than that.