Maybe it’s an age thing, when a game is so packed with menus, sub menus, as well as an almost unending amount of various button and trigger combos for moves or weapon layouts, that just playing it can give you brain ache.

Australian indie developer Subtle Boom (no relation, we don’t think), have stripped down all that fuss and nonsense for their latest title, to no less than one button.

The Pirates of the Caribbean ride just did its own thing behind closed doors.

You play one of a number of birds, where you have to embark on a journey, either by flight or swimming, to reach your destination. As soon as you take off from your perch, you have one button to press to keep your wings a-flapping. The quicker you press it gives you more height, and the less sees you descend. It’s that simple. If you’ve played a side-scrolling Mario game, then you’ll know exactly how it plays, as it’s a similar mechanic to when he’s swimming and flying.

As the screen scrolls from right to left, you have a number of challenges to fully complete the level. These can range from collecting certain objects, such as coins and feathers, to knocking out enemies, and even time trials to complete in a given time. The feathers are probably the most important, as you will need a certain amount to progress further into the game, as they act as keys that open doors.

And with only one button to press, it sounds an effortless breeze of a game. It would be if the developers weren’t a touch on the devious side. It may be a gorgeously colourful playground, but it’s not without menace. Enemies, for instance, have to be hit just right, for if you collide with them, or anything else in the world for that matter, you go back to the start. The developers show some degree of kindness here however, by including checkpoints, so if you die after passing one, that’s where you respawn. 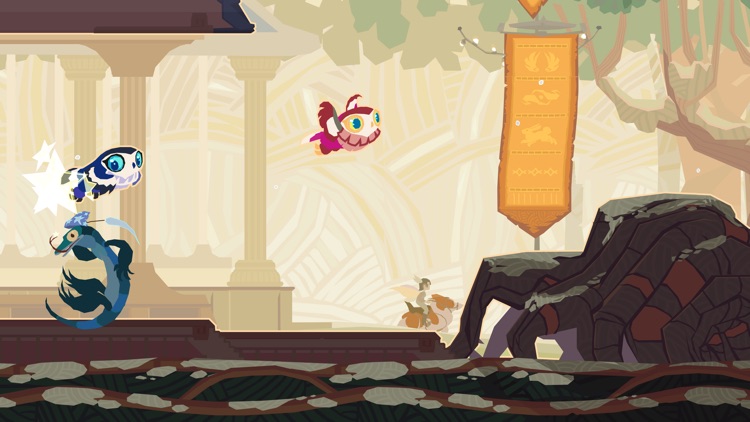 Another sign of their generosity comes by way of how you get through the level. A number of different things need to be collected, in various parts of the level, which mean you will have to play through it more than once. Thankfully you are aided in two areas: the first is that the levels are pleasingly short, which means that playing through them numerous times feels less of a chore. And secondly, once you’ve collected something, it’s yours, so you don’t have to go through the level attempting to collect everything at once. And if you feel like you could do with a helping hand – well finger – you can also play in co-op mode.

It’s certainly the perfect antidote to playing games where it feels as if you have to commit years of your life to finishing a level, making it a joy to dip in and out of. To that end, it’s like having a quality mobile phone game (which it also is, as it’s also available on the Apple Arcade) on your Switch, but without having the constant stabbing of the screen, which can grow weary after a while, as well as pesky in-app purchase.

It also has a little more depth to it, as you can create your own levels, that can be uploaded and shared. This can really tap into one’s creativity, young and old, which is particularly important during these restricted times. It’s also nice that level editing elements can be collected throughout the levels, which gives you even more impetus to complete challenges. Plus you can customise your characters, which is always entertaining. All in all making it an elegantly crafted experience.

It may be a simple enough premise, presented in bright, bold and breezy colours, but Fledgling Heroes can be as challenging as you want it to be. It offers quick bursts of gaming, that requires little in the way of demanding brain processing power, just tap the button, fly, and let your imagination soar.