I Told You I Was Freaky

by Flight of the Conchords

The future is looking a bit on the bleak side for Flight of the Conchords fans. Jemaine Clement (Jemaine) and Bret McKenzie (erm, Bret) have decided to land the machine that is the Conchords series and park it in a hanger indefinitely. This means that all further flights for the duo, on TV at least, are cancelled. This album then, their second studio album (which are basically the songs from their second series) may well be the last we hear from New Zealands fourth most popular folk band in a while. 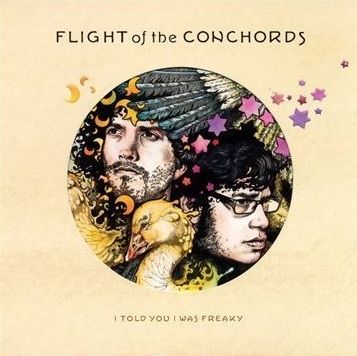 If you havent seen the TV shows, then go see them now. If you still dont get it, you can probably give this album a wide berth.

Now, to the rest of you left, you know the deal already. Remember those catchy - albeit silly - ditties, interspersed throughout the last series? Well, theyre all present and correct.

Although this is, to all intents and purposes, a classic novelty record, Bret and Jemaines songs have the ability to stand on their own four Kiwi feet. Part of their appeal is that many of the songs are unadulterated parodies of famous songs/genres. Although the pair describe it as a rap album on the opening track Hurt feelings, there is a mix of styles here.

It wont take you long, for instance, to work out that You Dont Have To Be A Prostitute is a loving parody of a certain hit by The Police.

Some of them are less obvious however, such is the case of the a cappela -ish track Friends, which has more of a hint of the Flying Pickets and their particular style of vocal warblings.

Then there are the more generic parodies, with the likes of Hurt Feelings and Sugalumps. Both of which contain silly lyrics (as does the entire album to be fair), but are so well produced that they could easily slip onto any trendy radio stations playlist, and not seem too out of place.

Another thing to consider is, because the songs are infectious ditties in their own right, you could easily find yourself singing some pretty nonsensical lyrics out loud. This may be something to be aware of, just in case you find yourself belting out the likes of Im gonna take the month of August off, just to get you off. Im gonna clear the table top, were gonna need a mop  and Lets take a photo of a goat in a boat, then we can float in a moat and be freaky (both of which are from I Told You I Was Freaky) out in public.

Overall, not all of the songs are on par with songs from their first album/series  lets face it, any band would struggle to follow the likes of Foux du Fafa, Business Time, Robots, and of course Boom  but they have a damn good try.

Hopefully, it will be far from a swansong to the bands career to date, but if it ends up being just that, there are worse ways to bow out than this. Fingers crossed though that Bret and Jemaine will both be present for many more years to come.