There are of course a zillion different types of racing game, and we have to admit to having a penchant for those that feature roads made out of rainbows. If we wanted a realistic driving experience we'd just fire up the Fiat Punto 1.1 and pop out to the Micky D's drive thru. So sitting in front of a telly and pretending to be in a real car on a real circuit leaves us a bit cold.

But we soon discovered that you don't need to be a fully fledged member of the petrolheads' club to enjoy what Forza 4 has underneath its bonnet.

On the surface it looks like any grown up racer. There are more licensed vehicles than a car thief would know what to do with; not only that, there's a second disc with even more on for you to download to your hard drive. We didn't bother with that  we'd probably only have bothered if the Batmobile was one of the cars on it, but sadly that's not the case (we also didn't want to turn our hard drive into a virtual car park)  but there was still plenty of choice on offer.

The interface is also fairly standard and easy to use. Thankfully you don't have to create some kind of wacky driving identity for yourself and can get straight to the grid pretty much from the off.

You start off driving a basic class of vehicle. They're not the most powerful, but they're still a bit of fun to drive. Now it's usually at this point we lose interest fast, when you notice that the car can be upgraded in virtually every area, creating a vehicle that feels like you're driving it on ice. But that is most definitely not the case here. 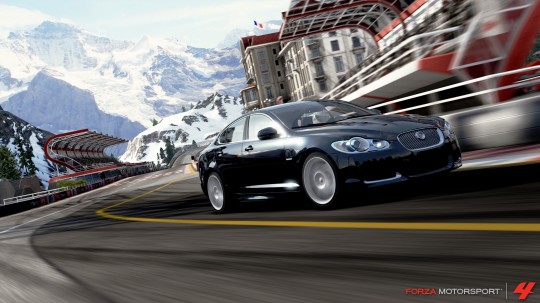 Hel-lo? Anyone home?! Might as well put my foot down then.

Forza 4 offers without doubt the most comfortable driving experience for a serious racer. There is absolutely no sign of any twitchiness, with no unbearable oversteer/understeer issues. In that sense, if you're used to arcade racers, getting behind a Forza 4 car will be like coming home. That's not to say you don't have to put any thought into your driving style. There is definitely a noticeable difference in handling between front drive, rear drive and four wheel drive cars. But the difference is subtle and won't throw your style of driving off balance too much.

And despite the cost of these cars, particularly the higher end more expensive models, they don't mind getting into a scrap or two. That's right, none of the cars here are too precious not to take damage. So hitting or getting hit can not only leave your bodywork with a dent or two, but can also have you spin off the course and lose position. It's not exactly Burnout, but at least the realism is there.

On our first race, quite by mistake, we drove in driver's view mode. Now we've never felt comfortable with this view, but didn't find it too off-putting. We actually won the race too, which didn't do any harm. But that might have more to do with the fact that our level of difficulty was on 'beginner'. For the second race we changed not only our view, but changed the difficulty to the average setting. Oddly, we still found ourselves winning all our races.

As we made our way through the campaign, we felt ourselves warming more and more to Forza. Upgrading cars, for those who don't want to fuss with changing every single nut and bolt, can be a breeze, with the game doing it automatically for you if you want it. And we did.

There's a lot of variety under its hood too. Take the tracks. There are a fair number to drive on, all around the world, so it never feels that repetitive. Some of them are quite pretty tracks to drive on too; one of the US tracks has a very autumnal feel about it, as you pass trees with vibrant red leaves. Then there's the picturesque fictional track set within the Bernese Alps, with its snow-capped mountains.

The one thing you won't encounter however, is bad weather. Regardless of where you happen to be driving in the world, you won't find a spot of rain. Variable weather would have been nice, but maybe they just didn't want to get their expensive cars wet.

The cherry on top of the petrolhead's cake however, must be the involvement of the Top Gear team. You can get Jeremy Clarkson's views on some of the fastest cars in the world in Autovista mode, which also gives you the opportunity to examine specific cars in detail.

Not only that, but there are a number of Top Gear challenges to face too. Many of them take part on their very own test track, which they use in the show. These can involve things like time trials through gates, to knocking over large pins. We think they missed a trick here, as it would have been wholly more satisfying to knock pins that looked like the Top Gear team. Who wouldn't want to run over Richard Hammond?

The series has also expanded the amount of cars you can race against, both single player and online, up to 16 players, rather than the previous eight.

There's also a whole lot of love for the Kinect too, whereby you can use it in conjunction with a controller, with the camera responding to your head movements inside the car.

The only real beef we have with it is the music, which sounds like they just lifted it off of the iPod of some oik off the street passing by. Most of it isn't conducive to any kind of driving, that's for sure.

Turn 10 have made a dream of a title for the car enthusiast. But more important than that, they've made one that those of us who can normally be riding around in karts can also appreciate. Now if they can add some red shell action for Forza 5...