Although this animated tale forms the third part of an unofficial trilogy by Tim Burton (he directed this and The Corpse Bride, and is credited with coming up with the story for A Nightmare Before Christmas), it actually started life as a live action short he released in 1984, starring Shelley Duvall and Daniel Stern.

As you would expect, coming as it does from the slightly warped, spider-webbed mind of Burton, this dark tale benefits hugely from a big screen animated make-over.

There are a couple of big days looming on the calender for residents of New Holland; not only is their annual Dutch Day on the horizon, but the students of the local elementary school have got a science fair to concentrate on.

Victor Frankenstein (Charlie Tahan) attends the local school, but doesnt really care about the upcoming fair. Hes happy enough with just hanging out with his best friend in the world, his dog Sparky.

Unfortunately for Victor, Sparky gets involved in an accident and soon heads off to doggy heaven. As expected, Victor is devastated by this loss. Instead of just accepting it though, he decides he'll do something about it, and concentrates on bringing Sparky back somehow.

Utilizing the power of lightning, he does just that, and brings old Sparky back from the dead. His classmate Edgar (voiced by Atticus Shaffer, who plays Brick in the US comedy sitcom The Middle. *whispers* The Middle) discovers what Victor has done, and wants him to help him do something similar in order to win the science fair. Despite swearing to secrecy, Edgar finds it difficult to keep his trap shut and blabs away to other class mates what Victor has achieved.

Before you can say 'Eureka!', all of his class mates are attempting to also bring creatures from the dead back to life, leading to a Dutch Day that none of the town will ever forget. 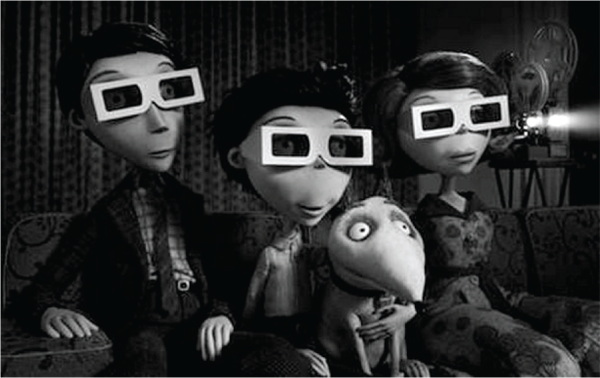 Is it just me or does the picture look a little washed out?

As with his previous animated adventures, Burton has created his ghoulish world beautifully. Instead of being hand-drawn however, the film was shot using traditional, stop-motion animation with a large cast of puppets. And to tie-in with the horror genre, its also stylishly shot in black and white.

On one level it works more than adequately as an entertaining  if slightly macabre  tale for youngsters to enjoy, focusing on the heart-tugging story of a young boy coping with the loss of his pet.

The real beauty of it however is that it also serves as a loving homage to the pioneering horror films of the 1930s. Many of the young students either take the name, or the appearance of, an iconic character of the time, as in the Frankenstein family, the Van Helsings etc. There are many other small touches included, that will no doubt bring a wry smile to older members of the audience.

The animation is nothing short of stunning; the world of New Holland has been produced with real passion using a technique so often overlooked for CGI quick fixes.

As always, Danny Elfman has produced an integral soundtrack that perfectly complements Burtons vision, with a sumptuous score that also nods its musical head to the rich scores of early horror films.

Its a simple tale, but one that dazzles in a way that only Burton knows how to bring to life on the big screen.