Theres something really irritating about Franz Ferdinand. Something really difficult to put a finger on. They are that itch that can never be scratched. And yet, as this album clearly proves, they are quite, quite brilliant. 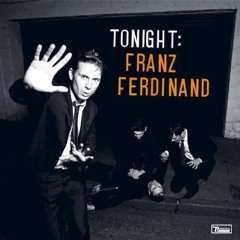 Part of the problem is, if someone stopped you in the street and asked you to reel off the titles of, say, five of their singles, how many could you name? Go on, try it. Exactly. You could probably hum one or two, if you were feeling particularly cheery, but that would probably be the extent of it.

Theres something very different with this third album of theirs though. It still has those clever little bits that many of their songs have, where they lead you down a little musical cul-de-sac that you werent really expecting, but still enjoyed nonetheless. And you still probably wont remember many of the track titles either. Ulysses and Twilight Omens have studs on the bottom of them, making them truly stubborn to leave the tongue.

But the songs themselves? Yes, theyre really good. Many of them, great. This is mainly due to the production, which has a wholly retro feel. A patchwork of disco, sixties and electronica, stitched together perfectly. A corker of a track is Turn It On  it has drums, beats, guitars; just like the perfect Subway sandwich it has a little bit of everything to make it really rather yummy.

With No You Girls, FF try to explain to the opposite of sex that, well, they have no idea how they make boys feel, and never will. True enough. Theyre sneaky buggers though, because by the end of the track, they do the old switcheroo, telling it how it is - that boys dont know how girls feel. Damn. All of this within a pumping little ditty. Genius.

If ever a song should be played on vinyl it should be Send Him Away, with its plucky guitar that The Shadows would be proud of alongside the sounds of a Hammond organ  all thats missing is the sound of the needle in the Franz Ferdinand groove.

The irritation with this band will no doubt live on, but if anything is to calm it, apply this liberally and often. It is an album with few faults and enormous likeability. Damn you yet again Mr Ferdinand...