Not Your Kind of People

Here's yet another blast from the past. Garbage return after a break of seven years since their last album Bleed Like Me. It looked like it was all over for the band, particularly with lead singer Shirley Manson going off to work on a solo project as well as take up a regular role on the TV show Terminator: The Sarah Connor Chronicles. But as fate would have it, as soon she joined the show, it was announced that it would get axed; and although she was thrilled with her solo effort, her label was less so and didn't release it. Thank God for the day job then. 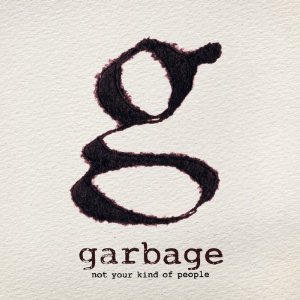 Curiously enough, this is only the band's fifth studio album; it just feels like they've been around longer than that and would have a larger discography than this. But no.

The bigger question - one that faces any band on the comeback trail in this day and age - is how relevant their particular sound can be to an audience now weaned on a far different musical landscape.

Luckily enough, it seems that Garbage have just stuck to what they do best.

There's always been a high-end polish in terms of the production on previous albums the band have made. It doesn't harm in having Butch Vig - who has produced the likes of The Smashing Pumpkins, Sonic Youth, Foo Fighters and an album called Nevermind by some band called Nirvana  as a member of your band. That producing sleekness is evident from the off with 'Automatic Systematic Habit'. Its pounding beat tinged with grunge pops out of the speakers with real intent. It sounds like Garbage of old, which is no bad thing at all.

'Big Bright World' continues with this underlying electro bed. It's pop to the power of 2. It's borderline aggressive but in the most politest way. Manson and the rest of the band sound like they've settled nicely back into their musical ways.

This continues with 'Blood for Poppies'. It supports this growing pattern of being well produced songs. But perhaps it's all a little too polished. This song in itself ticks all the right boxes in terms of the requirements for a decent 'poppy' song. But it does feel like the album is going through the motions to a certain extent. Not sure whether it was the best choice to be the first song released as a single either.

The gentle intro to 'Control' is quite deceiving; it gives an indication that this is the first ballad song, but that soon changes as it quickly churns out a substantially large sound. Even Mason's vocals appear wrapped in barbed wire. It would make a great anthem for a bunch of pirates with a love for guitars and keyboards.

The pace slows down with the eponymous title track, opening as it does with a Twin Peaks-esque bass guitar intro. The track suddenly morphs into something more esoteric, something that wouldn't be out of place on a Beatles album during their psychedelic phase. It's the first song on the album that doesn't automatically sound like generic Garbage. Also, deep into the track, Manson's vocals take on an unusual sweetness, sounding reminiscent of Belly's Tanya Donelly.

The frantic pace of earlier returns, somewhat disappointingly, with 'Felt'. Again, it doesn't do much wrong, but doesn't go out of its way to overly impress. Its guitars are straight from eighties, channelled from various indie bands of that decade.

Euro-pop on twenty cans of Red Bull. That's 'I Hate Love' in a nutshell. It's no more than satisfactory.

'Sugar' has all the hallmarks of classic Garbage. But then maybe that's just because it is reminiscent of their hit single 'Milk' from their very first album. Combine the two and you probably have a great cuppa. It's a little bit Moby, but that's OK. It has a little more depth to it than other tracks here, which is probably why it sticks out.

Manson comes out all PJ Harvey for 'Battle in Me'. Yet another track that sounds overly produced. Far too much is going on to allow the song to have any kind of identity of its own. And a melody of some description would have been nice.

There's a brashness that exists on' Man on a Wire', but it just has a more balanced approach than elsewhere. Again a retro sound, but one that manages to be pleasing to the ears at the same time.

For possibly only the second time on the album, the pace slows right down for 'Beloved Freak'. It's a gentle little thing, but again suffers from too much going on in the mix. Manson has proved that her voice is versatile enough to go from all the shouty shouty, right down to a whisper. This song just fails to emote any kind of anything on any level.

It's obvious that getting back together after such a lengthy hiatus would prove a challenge for any band. Garbage have clearly been too fearful to attempt anything remotely experimental regarding their sound. But somewhere along the line, they appear to have lost touch with the concept of a melody.

Much of this album is a well produced noise, but not much more than that. Garbage have made some really good songs in their time, some really well-crafted ditties. This album reeks of them trying too hard. But the truth is, trying too hard in all the wrong areas and losing sight of what made the band a success in the first place.

Maybe the pressure got to them, but the band definitely dropped the ball with this one. Not only did they fail to progress to some other level, they also forgot to develop what sound they had. Not Your Kind of People is more of a step backwards than anything. Which isn't exactly what you want with your comeback album.

It's by no means a hideous, unlistenable mess, but considering the talent involved, it has to be considered something of a disappointing return.