Back in 2006, Marcus Fenix and the rest of Delta Squad stomped their way onto the Xbox 360. It was the start of a campaign to save all of humankind from being wiped out by the Locust Horde. It was tough and chunky action of the highest order.

It went on to become a trilogy that still focused on the team's uphill struggle against brutal alien invaders.

Now the great thing about game franchises are that, unlike film, a trilogy of games doesn't mean the end of a franchise. The tricky thing about extending a franchise however, is what do you do next?

Well, as is becoming a fairly common practice these days, you go back to the very beginning in a prequel styley. But is a backwards step the right move going forward for this particular series? 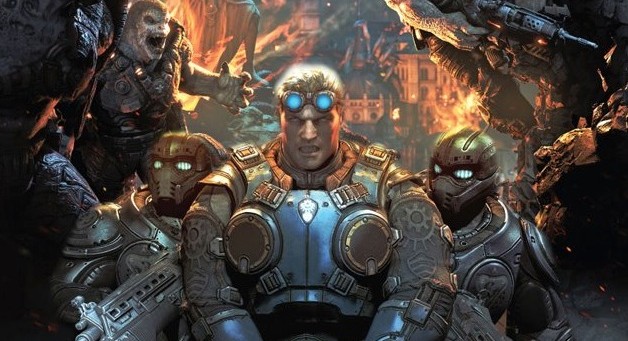 When you have nipples as sensitive as mine, you need a couple of frying pans for solid protection.

Gears of War: Judgment sees you playing Damon Baird, an alumnus of the Gears of War trilogy, taking the lead for this new adventure.

It takes place back when he was a Lieutenant, in charge of Kilo Squad, during the time of Emergence Day. He is on trial, where he and the other members of his squad, have to give evidence of their actions during this time.

Told in flashback, you take control of each character as they give their evidence, which you play through in a chapter.

With the first game coming out seven years ago, you would hope that the series has developed substantially over the years. You'd hope wrong. Although there's almost a warm and fuzzy feeling from the familiarity that playing a game can bring, there's a fine line between this and same old same old. Judgment doesn't just cross that line, it catapults itself robustly over it.

When Gears of War was first released, it was pretty early on in the life cycle of the 360. Judgment comes just at the end of the 360's lifespan. And yet the game's overall feel and look hasn't changed at all. Everything from the game's muted colour palette, to the mechanics of running, ducking for cover and jumping have remained exactly the same. You could easily swap the trilogy's main protagonist Fenix with Baird and there would be no noticeable difference in the slightest  except perhaps less of a bromance in the storyline.

What this instalment of the franchise has failed to do is evolve. It's about as formulaic as you can get and spits on the word 'originality' from a very big height. The flashback treatment may be an attempt to inject something new to the series, but the reality is, it's just plain lazy.

With the next gen of consoles revving up on the horizon, a lot of developers are squeezing the very last ounce of juicy bits out of the current systems; the dreamy looking BioShock Infinite is a case in point. Epic Games look like they just couldn't be arsed, and churned out more of the same.

If you're a gamer resistant to change, and a Gears of War fan, then Judgment will be your gaming equivalent of slippers and coco before bedtime  once you've got over the fact that Fenix and Delta squad aren't in it, that is.

That's not to say that there isn't fun to be had; revving up a Lancer and driving it into your foe will probably never get tiring, for instance. And there's an honest sense of camaraderie as you head off into adversity with your three AI chums for support. The multiplayer is frantic fun, but with only eight maps in total, feels somewhat lacking.

As far as the single player is a concerned, you get can add a little extra to the campaign mode, by choosing declassified missions. These are offered to you before every level, giving you the opportunity to fight in difficult visibility, using one specific weapon, or within a set time limit, etc, for the chance of earning stars for that level quicker. Even if you accepted every single one however, it doesn't increase the games overall length by any great number, which is a shame, as the campaign itself is somewhat on the measly side.

The developers had the opportunity to bring something new and fresh to the Gears of War table, and simply chose not to. This is a shame, as they risk the chance of being left behind when the next gen revolution comes, left with a stale and dated franchise.

The franchise needs its very own Emergence Day to happen, just to shake it up a bit. It needs a big hefty alien creature to give it a swift probe up the derriere to make it try that little bit harder next time. Otherwise, there may not be a next time.