Just under a year after the Xbox 360 was released, the first Gears of War game by Epic was released in Europe in 2006. It was universally hailed as a jaw-dropping game in terms of gameplay and visuals.

It was no surprise then that Marcus Fenix's first battle against the Locust Horde sold over three million copies in ten weeks and was the fastest-selling game of the year.

Fast-forward to 2011 as the third and final part of this Gears trilogy comes to a mighty end.

All did not end well for Marcus and his fellow soldiers of COG (Coalition of Ordered Governments) in Gears of War 2, when they were forced to destroy the Jacinto plateau on the planet of Sera, so they could flood the tunnels of the pesky Locust and to slow down the spread of the Lambent.

A couple of years on and Marcus is aboard the Sovereign, preparing to batten down the hatches, as the Lambent begin to surface once again. Former COG big wig Chairman Prescott makes a surprising reappearance, with a data disc in hand. On it is the revelation that Marcus' father, scientist Adam Fenix, isn't quite as dead as Marcus was lead to believe. Apparently he is being held against in will within a secret base known as Azura.

Marcus and his band of not so merry men and women decide to make their way there, but there's not only a lot of land to cover, but also an awful lot of enemies to try and pass. But with few else options in place, the gang have no choice other than to hit the road, possibly for the very last time, one way or another. 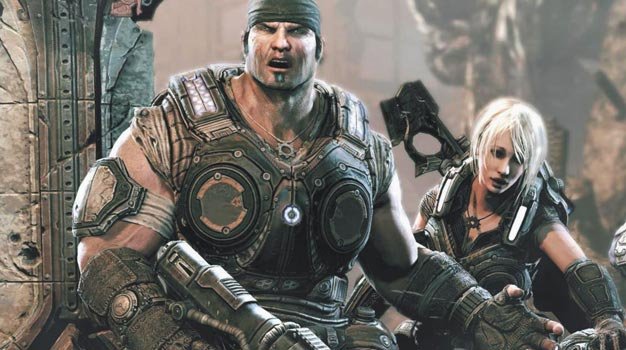 I know you won't believe me but sometimes I yearn for a nice desk job. Maybe next to the cooler. Sigh.

As plots go, this isn't exactly the most engaging one. What would have worked just as well is a bunch of signs saying 'This Way' throughout the levels, as you're being lead along a conveyor belt of grey. You soon understand what it's like to be a sheep as the game acts as a sheep dog shepherding you through the game.

You know when you reach a section where you're supposed to battle the enemy as there are a number of prerequisite sand bags awaiting you, so you can cover and shoot at will. Once you clear the level, you move on to the next. It's all remarkably dull stuff, lacking any imagination.

It doesn't help that there's little in the way of a colour palette, unless of course, you're very fond of the many hues of grey.

And although this is the third game in the series, there really doesn't appear that big a leap from the first game, never mind the second.

Another gripe comes with the weapons selection. At first there seems quite an array to choose from, as they are littered around the field of war from your dead foes. The problem is, despite having four slots to carry four different weapons, you don't have the opportunity to carry four weapons of your choice. Holding onto our trusty Lancer proved difficult at times, as we were forced to drop it to pick up a bigger weapon. After a while of dropping weapons only to pick another up for a brief period, before picking up your original one proved tiresome, leading to going through virtually the entire campaign with only the Lancer in hand.

This lead to its own set of problems however, as ammo for the Lancer seemed more remote than a cure for the common cold at times. This wasn't that big a problem however, as you are constantly being shadowed by three CPU players, who are on hand to literally offer a life line. This means that playing through the campaign in single player is a painfully easily experience, even for the relative newbie.

A case could be argued that GOW has always been about the multiplayer experience; either playing through co-op in the campaign mode, or online. It's not much of an argument if you've bought the game to play through on your own however. The only real saving grace of the single player element is the script; the story might not be up to much, but many of the characters are pretty well developed, making them very personable indeed.

Thankfully however, Gears does have a more than competent multiplayer aspect to it.

As far as the co-op campaign mode is concerned, it's not difficult to see that it's a far more entertaining route to go down. As is its online game.

There's your standard Team Deathmatch mode, as well as Warzone, Execution, King of the Hill, Capture the Leader and Wingman. On top of that there's also Horde and Beast co-op modes, which should keep the most hardened online player satisfied.

One niggle throughout both single player and multiplayer is your character's inability to vault over a sandbag, table etc. with one press of the button. Any attempt to will only have your character crouch for cover; once he's done so, you can then press the button and push up to jump over your cover. Sometimes you just don't want to take cover; sometimes, you want to take the battle to your enemy and leap over anything that in your way. Not in this game you can't though.

As a finale to the trilogy goes, it has to be said it's a bit of a disappointment. Of course the franchise isn't dead, Epic aren't that crazy in the coconuts; and even if we don't see Marcus as the central protagonist, Gears of War will of course trundle on, in one shape or another.

It's just a shame that a series that made a real impact five years ago, just hasn't advanced as much as it should have. Fans of the series will of course refute that statement  well they would, wouldn't they  but this series hasn't moved on as swiftly as the likes of COD for instance.

Having said that, Marcus' gaming journey may well have been on the damp side, but at least the character himself has gone on a sombre emotional journey. And for many, it's his story's conclusion that will clinch it.