Here's a fact for all you fact fans: the Ghost Recon series has actually been running longer than the Call of Duty series; it debuted in 2001, whereas COD appeared on the war horizons two years later.

Although both franchises would fall under the war shooter category, they are very much two different types of soldier.

The main difference for the Ghost Recon games is that they've always been about safety in numbers. You're usually part of a squad of four who have to work together to complete missions. And surprise surprise, this Future Soldier is no different.

It's the near future; you can tell this because much of the kit at your disposal doesn't actually exist, but it's probably not that far off from being available later on down the line.

A dirty bomb (it's always the dirty ones, have you noticed?) took out a Ghost Recon squad, so it's down to your squad to track down the culprits. This mission takes you around the world, as you follow up on leads on various missions, but sadly there's no time for taking snaps sightseeing.

The other noticeable difference between the Ghost Recon series and games of COD's ilk, is that there's far more sneaking around to be done. If you go in all guns blazing, you will be punished. Although Ubisoft would like to describe the game as more strategic, in truth it really is just sneaking around. So much so that they really should have a guest star appearance by Ubisoft's other stealth monkey Sam Fisher who has probably spent more time on his knees than most Thai lady boys.

In earlier games you got to control where the other members of your squad could move to, which certainly made it more strategic. Here though, they just follow you around like a gang of well-armed Justin Bieber groupies. Still, it's nice to have company now and again.

If you use the drone at your disposal however, you can not only pinpoint the whereabouts of the enemy ahead, but also command other members of your team to take them out. This is where it pays to hang back slightly, because there's less chance of taken a bullet. If you do, it can be a serious pain in the arse, regardless of whether you were shot there or not, as you have to lie there and wait for a team member to come and revive you. Just have your fingers crossed that you're close to cover, otherwise it will be seconds before you're shot at again and killed. Meanies. 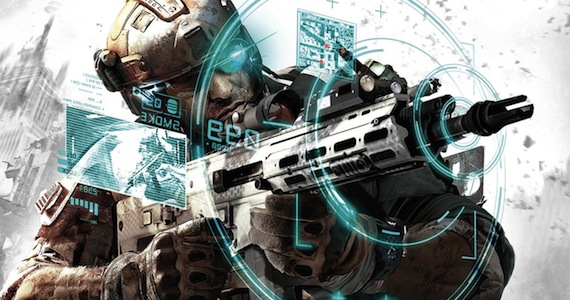 This is an amazing piece of kit. If I move it a couple of degrees to the left, I'll be able to pick up Sky Sports 1.

For the first half of the campaign, your squad all seem really quiet types. It's not until well into the second half that they begin to chirp up and show a bit of personality. The interaction is far from sparkling though and feels like it was almost an afterthought.

Although many of the missions are solid enough, the game overall lacks any real memorable set pieces. You arrive at an area, clear it, then move on. Then repeat.

It also includes the now standard section of shooting enemies down from a helicopter; an earlier Ghost Recon title impressed with a level where a helicopter entered a dangerous area and then began to circle around the enemy on the rooftops. It was engaging and exciting. Here, though, a few years on, everyone has used it there's just nothing left in the tank anymore.

It's still a lot of fun to initiate sync kills however; although not new, the ability to mark four of the enemy and have your entire squad take them all out at the same time is still vastly satisfying.

Some of the locales are fun too if a little obvious; we've never been to Russia but we could probably put the guide book away and get around on our own fairly well thanks to it being a location in every shooter imaginable. One or two of the missions have you literally passing through locals, which are something you don't always get to do in this genre of game, as you attempt to avoid friendly casualties at all costs; there's an element of heightened caution attained as locals run pass waving their arms in the air. Little do they know that it makes them easier targets, schmucks.

And despite this clearly not being the kind of game to cater to a solo campaign, it does a pretty good job with it. It's by no means the most intense shooter you'll ever play, but it's a meaty experience.

Where the game wants to be enjoyed is in multiplayer. The solo campaign then becomes a comprehensive co-op campaign that should certainly test some friendships. You glory hunters know who you are.

As far as multiplayer in general is concerned, Future Soldier falls short when compared to the likes of COD; the maps available just didn't excite in anyway, and if you think that campers are annoying, then prepared to get extremely annoyed here.

It has a nice gloss finish, with some pretty lighting and weather effects, but Ghost Recon: Future Soldier simply misses the wow factor by some considerable margin. It's technically competent for sure, but sadly lacks the fun factor that must come as standard with modern warfare these days.