Re-makes of foreign films for the English speaking market are not unusual; after all, if there’s one thing that mainstream America hates, it’s having to read when they go see a film.

It is fairly rare for the same director to make the same film twice though, as Sebastián Lelio has done here; in 2013 he made Gloria in his native Chile, and now he returns with this US remake, starring Julianne Moore as the titular character.

Roses are red, violets are blue, and other flowers of different colours...

Since her divorce, Gloria (Moore) has spent a considerable amount of time on her own. She has a family – two children – but as they’re all grown up and living their own lives, she doesn’t spend as much time with them as she would like.

It doesn’t hold her back socially however, as she bravely puts herself out there, dancing her troubles away on a dance floor. On one of these solo nights out, she meets Arnold (John Turturro); a recent divorcee, with two grown-up children, like Gloria.

They get on so well, that they go out again, and Gloria feels a real connection between them. However, Arnold comes with a fair bit of baggage, which he’s struggling to deal with, that holds the pair back from moving in the direction that Gloria would like. 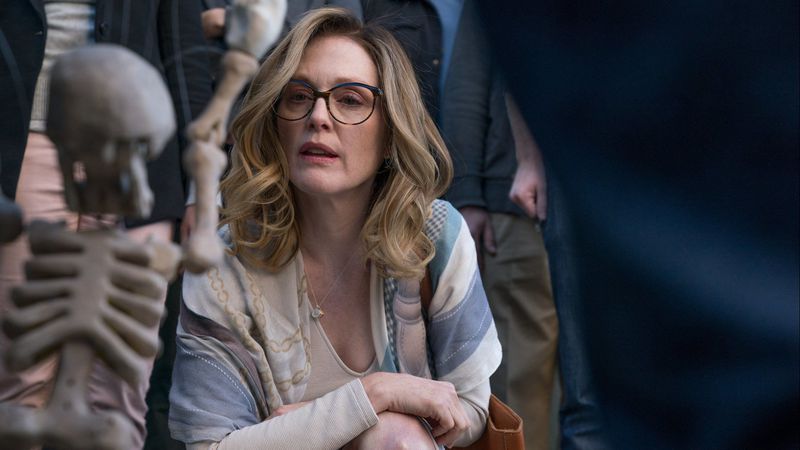 Didn't I star opposite you in that movie one time?

Lelio’s second crack at presenting a free-spirited woman in her fifties is, on the whole, a pleasing one. This is mostly down to some elegant performances, mostly in the shape of Moore. Despite being vulnerable, Gloria is remarkably brave in doing her own thing, and not letting her situation get the better of her. Moore taps into both the vulnerability and drive to do what she wants, with a natural grace.

The real joy however, is in seeing Turturro back on the big screen where he belongs. He’s an old school character actor, who really needs to be working more. He puts in a good shift here, despite not having nearly as much screen time as he deserves.

The same could be said of Michael Cera, who features all too briefly as Gloria’s son; coping not only with a seemingly inevitable break-up, but also new-found fatherhood. To think, it doesn’t seem that long ago that Cera was playing the nerdy teen – they grow up so fast, don’t they?

It’s most definitely Moore’s film though, appearing as she does in almost every frame. Yes it’s amazing that a woman of a certain age (although of course, age really shouldn’t have a bearing, but, you know, this is Hollywood) not only takes centre stage in a role like this, but deserves to be, it just feels that perhaps the character would have benefitted from having a foil to interact with; Moore never really gets to openly discuss how she feels with anyone around her, which would have been useful from an audiences point of view, instead of a whole lot of emoting.

This is possibly the influence of Lelio though, bringing with him some South American flavour; you can imagine in the hands of a US director, Gloria Bell would have been a very different woman.

As it is, Gloria Bell is a charming celebration of a mature woman discovering that, regardless of how much experience in life you might have, it doesn’t mean that relationships suddenly get less complicated.