It’s difficult to imagine the audience's reaction to seeing King Kong for the very first time on the big screen, in RKO’s 1933 classic, particularly the iconic Empire State Building scene, but it must have been a true sense of wonder.

Fast forward to today, and with the incredible leaps in technology that have followed in cinema, it’s becoming increasingly more difficult to replicate that initial response, with CGI so commonplace.

But it hasn’t stopped these two old timers from putting their retirement from monster duties on hold, to have what is essentially a good old fashioned scrap on the silver screen one more time, with Godzilla in one corner, and Kong in the other. 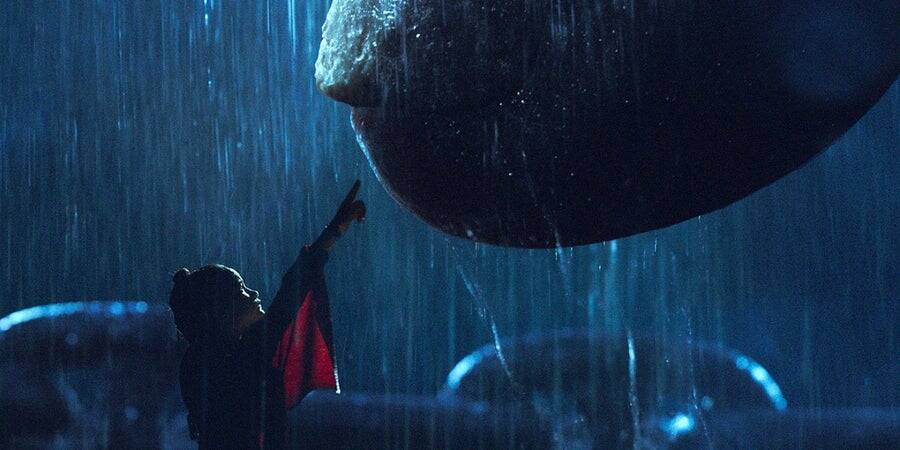 I think we're gonna need a bigger phone if your to phone home...

You know how there are some family members who just don’t mix well in the same company, and its best to keep them apart? Well, this principle has been assigned to that of Kong and Godzilla, with the theory being that there can’t possibly be two alpha titans in the same area together.

Unfortunately for Kong, he’s the one who’s been kept separated in a containment facility on Skull Island. And he’s not happy about it.

It’s made worse by that cheeky scamp Godzilla, rubbing his nose in it, by attacking Apex Cybernetics in Florida, causing mass damage. Head of Apex Walter Simmons (Demián Bichir), approaches scientist Nathan Lind (Alexander Skarsgård), who is an advocate for the ‘hollow earth’ theory, suggesting that not only does he agree with him, but also that he has the technology to get there. He believes the hollow earth is home to a power source that can be used against these alpha titans, and therefore keep the world safe.

Lind is given the opportunity to head up the team to get there, including scientist Ilene Andrews (Rebecca Hall), who has a relationship with Kong – at least through her daughter – as they will need to take him with them.

But unbeknownst to Lind, Simmons has an ulterior motive which he’s keeping quiet about, as his plans are unlikely to win over any of his new recruits.

I knew having that Chinese cold would be a mistake.

Being given the chance to direct a Godzilla flick must be somewhat of a poisoned chalice; most audiences who are invested in the lore just want to see big monsters bash each other up, which isn’t really sustainable as a plot device for an entire film. Therefore there needs to be a bigger hook on which to hang these said monsters. Unfortunately for director Adam Wingard, this is exactly where he comes unstuck.

The plot is just too dense and preposterous to make any sense; it involves a peculiar nod to the likes of 1976’s At the Earth’s Core, starring Doug McClure and Peter Cushing, that sees Kong travel to the middle bit of Earth. It’s difficult to say that it’s a premise that’s hard to swallow, especially in the context of a film that sees two monsters as its main protagonists, but even in this scenario it comes across as implausible and unconvincing padding.

What it is, is a fairly clumsy plot device to get to the final third of the film that really matters, the main bout of the evening. And Wingard does well with his two CGI stars and their city environ, as they settle down to some classic monster bashing.

But regardless of how much CGI is used, you can’t help but feel that, although both screen icons, Godzilla and Kong are just a little tired and dated. There’s a level of sophistication expected from screen monsters of today – not that they all reach it mind – which these two brutes lack. They’re also hindered by the fact that they only communicate in roars; perhaps they could have been helped out by subtitles, without going to the need for them to speak, which may be a leap too far, but all the barking and whatnot gets a little tedious after a while.

There’s no denying they’ve served the monster genre well, but perhaps it is time to seriously consider a more permanent retirement plan, that will benefit them as well as audiences, before the inevitable happens, where both are Lycra-clad, bouncing around a ring with crowds baying for blood, putting on well orchestrated moves, in a bid to get a Pay-Per-View special, for the title of king of the ring. And no one wants to see that.