2008s Seventh Tree was an ethereal trip for Goldfrapp. It was quiet, gentle and wistful in nature. It seems Alison and the band have got a lot of that wishy washy-ness out of their system with the arrival of Head First. 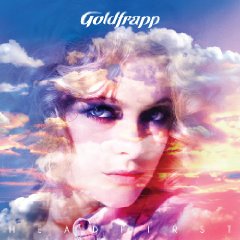 The single Rocket is a good example of whats on offer here. It appears that the band kidnapped the synth player from Van Halen, forcing him to synth his way all over this their fifth album. This song in particular has the exact keyboard parts of Jump littered all over it.

It feels like it was recorded during that awkward time when the seventies reluctantly became the eighties, without any real clue what to sound like. Its stuck between disco and pop rock, wearing nothing but comfy slippers.

Alive could be the theme tune to one of those dire comedies from the same era, probably about a ghost who can only be seen in discos.

The albums eponymous title track has a fair mix of piano and synths thrown into the mix, with Alison draping her vocals gently over their union. Its nothing more than pleasant though.

Sadly, thats just the word to sum up the entire LP. Hunt feels like a more obvious Goldfrapp effort, albeit one that would work as a B-side somewhere. But does nothing to change the overall mood of lacklustre.

A bit more effort appears to have gone into Shiny and Warm, as it has a little more get up and go about it.

And considering there are only nine tracks in total, it seems a little cheeky to make the last track Voicesomething a semi-instrumental. That said, its probably one of the stronger tracks on the album.

The fact is, Felt Mountain is one of the greatest debuts of all time, so it was always going to be a struggle to top it. However, to the bands credit, they have managed to change their style and sound over the last five albums; it would have been all too easy to clone Felt Mountain over and over again.

But having heard the magnificence of their first long player, everything they do will always invariably be compared to it. And by Goldfrapp standards, this is an extremely weak effort. It lacks direction, emotion and drive. Worse than that though, its just bland. Its lift musak that hasnt had to be altered in any shape or form.

Perhaps for their next album they can leave their heads alone and remember where they put their hearts.