You’ve had a long, hard day, slaving your fingers to the bone. Or the very least the mushy, fleshy bit. You want to relax, take yourself out of your dull, humdrum existence, if only for an hour or so, and have a magical adventure in a video game. But what if that game finds you working in an office, given all the menial tasks under the gloomy sun?

It doesn’t sound very magical, does it? That’s because it’s not. But what Good Job! is, is a Nintendo game, and therefore brimming with its special brand of magic.

It was noticed by many that the launch of the new iToaster was a little underwhelming.

You play a generic looking character; a faceless, naked individual, who has got a new job, working in HQ for a company. It sounds like a great opportunity until you realise that it’s pure nepotism, as their father is the CEO of the company.

Still, nepotism only gets them inside the building, as they have to work their way from the bottom up – literally. After getting past reception, you take the lift to the first floor, which is where the real work begins.

From here on in each floor is divided into a number different areas, including offices, meeting rooms, logistics, marketing, research etc. After entering a room, you are given a glimpse of what needs doing – a broken projector needs to be replaced with a new one for a meeting, for instance – and then you have to go about getting the job done.

Ultimately it’s a case of getting something from A – B, which is pretty much the crux of the entire game, but how you go about it is just wholly entertaining.

At the heart of the game is its physics mechanics; there’s a lot of picking up objects, pulling and pushing, so if you bump into something, the likelihood is it will fall over. And as with real life, there are consequences to your actions, with any you break you pay for. There is a genuine impulse to just be that bull in that china shop – and you should definitely embrace that, just to feel alive – just don’t expect a particularly good score at the end of it. But that’s another great aspect to the game, if you don’t feel like playing by the rules, don’t. You may have to play through with your sensible head on (do you have one of those?) at least once however, if only to unlock the next floor/level. 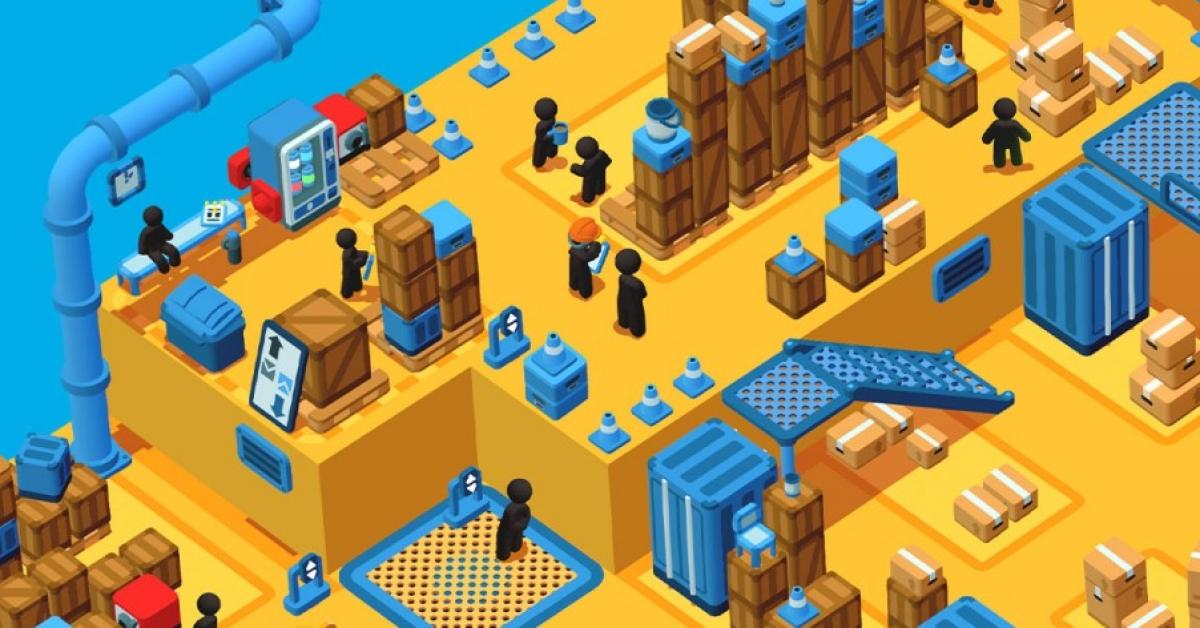 Although the end of the world was officially in ten minutes, the Amazon warehouse team still had items to dispatch.

And although working in an office environ in real life can drain every particle of your soul, it’s nothing but fun all the way with this title. After all, who wouldn’t want to work in a warehouse driving a forklift truck? Or use a hosepipe to water a garden, only to shoot it at the floor and propel yourself skywards?

Dutch developer Paladin Studios have created nothing short of a gem of a game. They have taking a mundane subject matter and turned it into a hugely entertaining playground. It’s also aesthetically pleasing to look at with its pastel coloured palette throughout.

There are certain pressures, like you’re up against the clock, and the previously mentioned breakages, but it still allows you to play at your own pace. Which you may have to do a lot, as some of the puzzles are borderline devious, and some thought may have to go into completing it.

You can also play in co-op mode, which is refreshingly angst-free, as you don’t have to rely on working extensively together, as one of you can go off and do one thing, and the other another. Perhaps the only real element of disappointment is that these co-op levels use the game’s main levels, and as they are such a joy to play, it would have been nice to have some different challenges completely, but that’s just being greedy.

They say that if you find a job you love, then it isn’t work at all, and that’s Good Job! through and through, as working has never been so hugely enjoyable and rewarding.