For many, there’s somewhat of a Marmite effect when it comes to fighting games, which means there’s a either a lot of love or hate for them. Other genres can have a middle ground, attracting the occasional casual gamer, but fighters not so much.

This punchy title is based on a Japanese RPG – Granblue Fantasy – that was released in 2014 for the mobile market and as a web browsing game. What it does, quite cleverly, is embrace its RPG heritage and merge it with 2.5D fighting arena, resulting in a fairly accessible title.

The main meat to this game can be found in its RPG mode, which is effectively its story mode. It’s here that it spins out quite an elaborate story, which finds a team, led by the handsome Gran, that fly their ship through the skies to various locales to do battle. So i'm a game-playing, comic-reading nerd am i??!!

You start off as Gran, with the first chapter mostly devoted to being a tutorial. As with most fighting titles, there are combos available to defeat your enemy, so it’s not all button mashing. It’s during this stage that you realise that there’s a bit more depth to this mode, with its RPG elements. After picking up enough chests with coins and weapons, you can start to tinker with your character’s abilities. Thankfully it’s not overwhelming, like some pure RPG’s can be, but you can see the novice getting a little lost further down the line. Even then, it doesn’t distract from the beating heart of the game – the fighting.

You can move your character on a 2D plane, left and right, with jumps and crouching available, natch. You then have to beat up whatever comes your way. If you succeed, you can move to the right to the next screen, where further enemies lurk.

The deeper you get into the game, the more the novice may find themselves relying on button mashing, which is OK, as long as you win. If you take some time to learn the combo moves however, the game is far more rewarding.

That said, you do feel like you’re giving your right hand a proper workout. Thankfully the story pops up on a regular basis, which not only allows you to be taken in by the attractive artwork on show, but also serves as a nice little breather. There’s every chance however, that prolonged bouts of playing the game could risk the odd limp wrist to RSI or worse, so remember to take regular breaks. 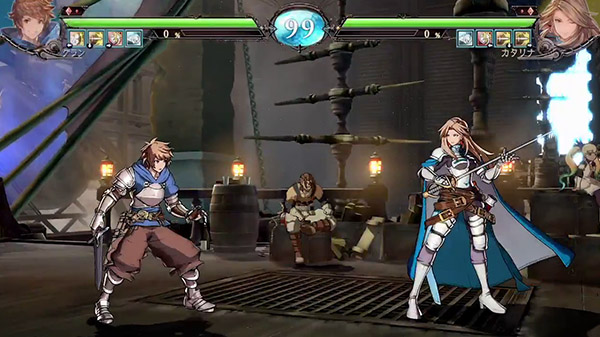 If this is your idea of a great place for a first date, then i'm off.

During the second chapter, the game introduces its next element, which is the ability to fight alongside another character. If you want to continue in solo mode, then the CPU picks up the slack, but if you have a friend, then they can jump in and join you.

It’s at this point that you have to appreciate the game’s structure, as it gently introduces different aspects without flooding you with information. We’ve played other Japanese RPG’s that really can’t be arsed to hold your hand, so this support is welcome.

The story is creative, the artwork quite beautiful in places, and the characters, of which there are many, are rich and varied. It’s at this point that it should be made as clear as crystal that we are neither huge fans of either hardcore RPG’s or fighting games. Sure, hate us if you want, but that’s just the facts. What Arc System Works have produced however, is a triumphant hybrid, which merges two worlds that you wouldn’t necessarily think would gel, but somehow do.

Just in case that doesn’t work for you, they’ve also included a more traditional arcade mode, that strips the story away, and simply allows you to beat characters up like an old skool 2D, either on your own, or with a pal.

Add to that an online option for fights worldwide, and you have a thoroughly comprehensive beat –‘em up.

Granblue Fantasy: Versus is an impressive hybrid, that should make it far more appealing to both hardcore and casual gamers alike. It puts up a hellava fight, and there’s every chance it’ll win you over.