With the racing sim being one of the most popular genres in gaming, it’s understandable that trying to come up with an original name that will really stand out can be hard. But seriously though, Gravel? Apparently it could have been a lot worse, with Grit and Tarmac both strong contenders.

It should have just been called Nigel and be done with it.

If we can just leave the lame name in a lay-by for a bit, what does this title have under its hood exactly? Surprisingly, quite a bit. 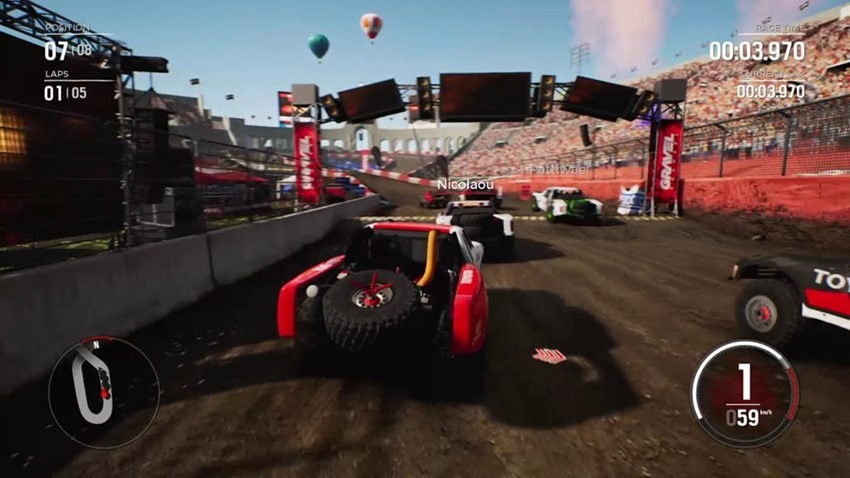 Erm, how come Nicolaou gets a floating name thingy and I don't?!

The game sets itself up as a TV channel, which is pretty believable; there are plenty of naff-named channels that dwell in the darkest, dankest parts of a satellite EPG, with some fairly niche subject matter.

Unfortunately the game doesn’t push this concept nearly enough, leaving it feeling like a lightweight gimmick. So once you’re past the English voice-over, desperately trying to inject some much needed personality into proceedings – and failing – you’re left with a relatively simple menu system.

The true engine room for Gravel is in career mode, which is pretty extensive. You start off with basic cars, if you win races, you can be rewarded with new vehicles, as well as unlock further events. You’ll need to accrue a whopping 120 stars, which is a Mario amount to earn, to enter the final league. But it truly is a long and winding road to get there.

Where Gravel shines is in its variety; it’s an off-road racer that truly takes you around the world, rocking up to a myriad of events, in all sorts of vehicles. There are figure-8 stadium races, journeys across deserts and through jungles, in anything from Mini’s to monster trucks. Something for everyone, then.

One of the worst events is driving through signs; if it has a green arrow on it, drive through it, if it has a red cross – avoid. If you hit a cross, and you invariably will, you will get a time penalty. It’s oh so tricky, and you will probably hit the restart button a lot. With a bit of patience though – which we freely admit we have in short supply – there is an achievement for coming in first place. 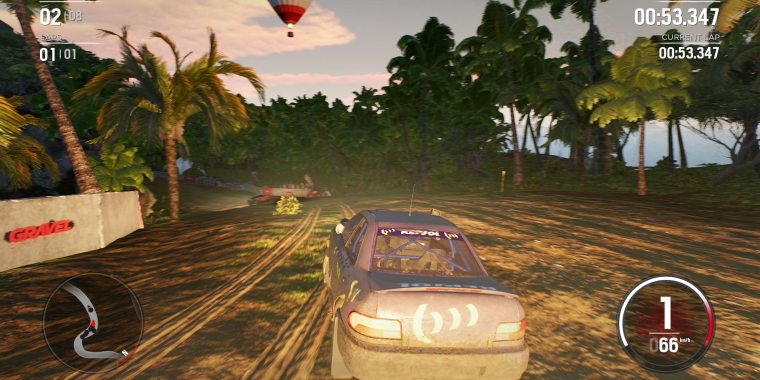 I'm not sure about this SatNav; this doesn't look like Hanger Lane to me.

Another feature which we embrace in driving games is the rewind button, and thankfully it appears here, although not across all disciplines. The thing is, once you know it’s there and you can use it, it’s difficult to not keep on using it, trying to get that corner just right. It doesn’t help (although, it sort of does), that you can do this as many times as you like in races that you can use it, which can disturb the rhythm of a race.

It has to be said that Gravel isn’t the prettiest of games. If you play it in 4K, its many blemishes will be reminiscent of looking at your teen self from a distance and thinking you look OK, only to notice, by getting that bit closer, that that zit on your cheek is looking angrier than ever and is going to get Mount Etna very soon. But as everyone around us keeps saying, looks aren’t everything.

Gravel is surprisingly diverse and challenging, and when you think about it, you can’t ask more from a racing game than that. It’s a solid arcade racer, and although no looker, is a good little dependable runner.