Having meet working on US sketch shows, Joecelyn DeBoer and Dawn Luebbe decided to star, write and director their first feature together, Greener Grass. We chatted to the pair about the experience, but more importantly, about those braces. 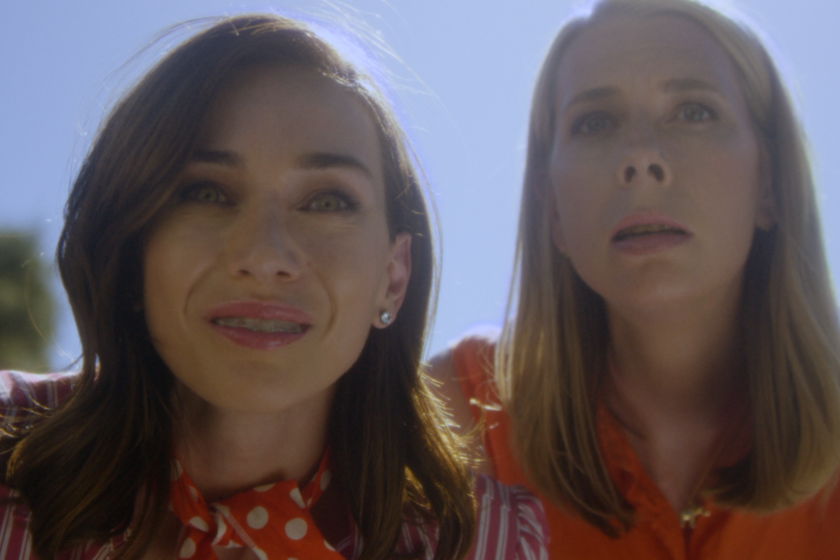 Jocelyn DeBoer as Jill and Dawn Luebbe as Lisa in Greener grass.

It’s no secret that in the film and TV world, women have to work so much harder than their male counterparts, usually being judged on entirely different lascivious criteria when it comes to positions and roles.

The path in comedy feels just as limiting; if you’re not one of the very few lucky ones to become a member of the Saturday Night Live team, your options are slim.

Two women fully prepared not to let a thing like sexism get in their way are Jocelyn DeBoer and Dawn Luebbe. The pair became friends when they found themselves working on various TV sketch shows in the States, and made the decision to work together.

The result was the dark short film Greener Grass that they wrote and starred in 2015. “At the time we made the short, we had no plans to make a feature.” says Dawn. “Then over the next few years we made a couple of other shorts, and we’ve just absolutely loved working together.”

But even though the short had been shot and put to bed, they found themselves continually drawn back into the surreal world they had created. “Back in 2017 we came up with the idea of Greener Grass as a television show and we were so excited to expand and develop the world of Greener Grass and dive back in.” Explains Dawn, “But towards the end of the year it just started to look like there wasn’t going to be a budget to make the show as it was written as. We talked about whether we still keep going with the idea of the TV show or leave it? What do we do? We were both itching to just make something.”

There was one factor however that eventually made the decision for them. “The other thing we were worried about the TV show is that we probably wouldn’t be able to direct it,” says Dawn, ”as we had just done a few short films, and it was so important to us to direct this. So at that time we pivoted and decided instead of a TV show, we’d make a feature.” 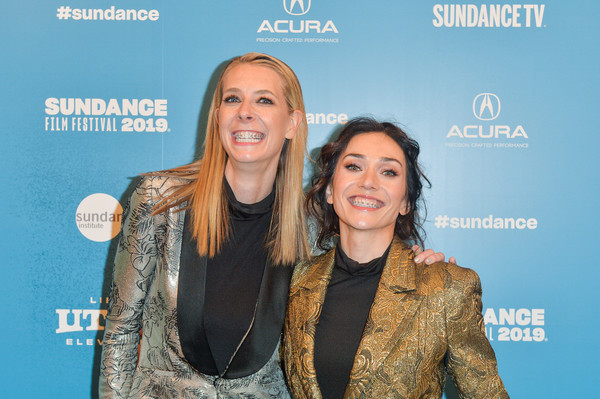 With the focus now on a full length film, and the financing in place, all that was left was to shoot the thing. With all the pressure that comes from making a film, particularly one that you have both written, and star in, you can see the appeal of sharing the responsibilities, especially when it came to directing. “It was a dream being able to work together” declares Jocelyn. “Truly, I don’t get anything done on my own. It’s extremely nice that Dawn and I have each other to get things done. It’s indicative of us of how we made it” she adds, “a nineteen day shoot, in seventeen different locations, babies, kids, a seven month old puppy! It was quite a grind. Getting to direct together, I honestly think it made the experience, we were laughing so much of the time, when things were going terribly.”

As if these elements alone weren’t challenging enough, they brought it on themselves for both their characters to wear braces throughout, which somehow manages to make them Lecter-esque. “When we made the short film we hadn’t mastered how to make those braces at all” informs Jocelyn. “They were so fragile, that when they were put on our teeth, we couldn’t take them out, and we couldn’t eat any solids. So we could only drink smoothies throughout making the short. We discovered that Dawn had an orange smoothie and it coloured her braces orange, so one of the major challenges from making the short was how to remove the orange from Dawn’s braces! So when it came to the feature, most of our budget went on the braces! They were awesome, we could pop them in and out, easy breezy.Adds Dawn, ”We had someone make them for us, and they made thirty seven of them!”

A film like this, with such striking characters, will always make audiences wonder the inevitable – are these people real? “Oh my God”, Dawn exclaims, “I would say that the characters weren’t based on one particular person, but a collection of behaviours that we’ve seen in many people, and kind of hiding those behaviours. But no-one in particular, luckily”. Luckily for us all.

And now that Greener Grass has delivered them a short and a feature, could a TV show now be on the cards? “We’ve been asked this several times now” says Jocelyn, “and if people are interested, sure, we’d love to! Greener Grass is an unusual world with endless amounts of stories to explore.”