The term reboot has become all too common parlance in the film industry, sadly, essentially becoming a term to mean an unoriginal remake.

It’s not one often used in gaming, but certainly doesn’t have the same kind of demeaning weight to it.

The GRID franchise has long been established, coming as it does from the Codemasters team, who know a thing or two about racers, but this new interpretation is most certainly a new spin on things. 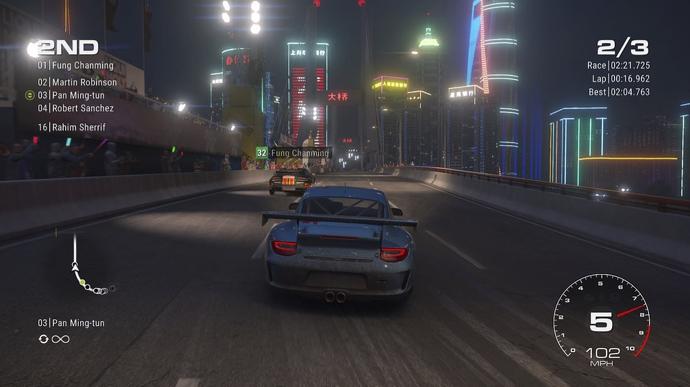 Listen Kev, this definitely isn't East Croydon, can we turn the SatNav on now?!!

It’s certainly a no nonsense approach to the genre. There have been various attempts recently to inject personality into driving titles; take the Forza Horizon franchise, with its cool festival theme, for example. It’s a more playful approach, and casual too, with its open world setting. GRID is the type of game to brush its shoulder at the very thought of such a concept.

Here’s the GRID philosophy: rev your engine, put your foot on the gas and attempt to win the race, repeat. No social media bullshit, no ‘try all our wacky radio stations’, no dangling air fresheners from the rear view mirror. Just pure racing. And despite this being a reboot, nothing has changed in this department. So what does make this version different?

Firstly, it looks gorgeous, especially on a 4K TV. Despite not having various landscapes to drive through that an open world can offer, the game still manages to impress visually. It’s the little things, like the rain pouring down, or the bunting hanging over the circuit, or the emissions from the exhaust on the grid, but all these little elements add up, to what is a pleasure to watch.

We’ve often found many racing titles that ease you in, by basically allowing you to win the early stages quite convincingly. This has always done much for our egos, and always will. This game however, doesn’t care for such things. If you want to win, you have to race well.

Its career mode certainly isn’t interested in being cute and fun either. There is a list of differing events, including touring, stock racing, GT, etc, on offer. Choose a car and race it. If you do well , you get cash, and another event to enter. It’s that simple. It may not have much by way of a quirky personality but by God it’s thorough. 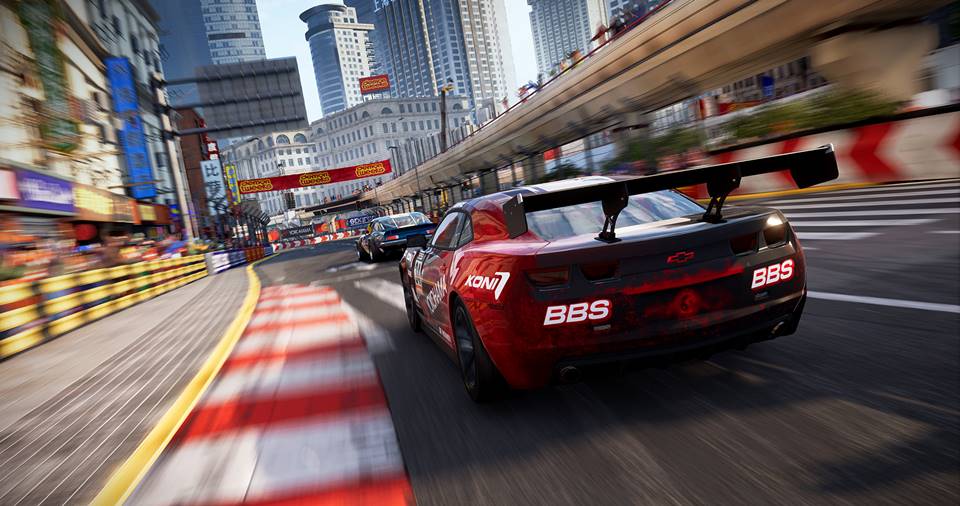 Did anyone remember to pack the sick bag, coz I definitely feel the need to slow down...

Each event means you have to think differently too. The cars you’re driving have different handling, which of course you have to take into consideration for every race. You also have to factor in the weather too, particularly if it’s raining, because there will be a fair amount of slipping and a-sliding.

Thankfully there is a rewind button for moments of madness, but, as we found out to our cost, this is for a limited time, so only use it when you desperately need to.

Unlike some racers, and this even goes to some previous Codemasters titles, the handling isn't scarily accurate and offputting; instead it has an element of an arcade game about it, so without that Top Gear techy feel, it makes the whole experience more fun.

Some obvious new additions include team-mates and nemeses. A team-mate in another car can benefit you financially depending on where you finish as a team. The deeper you go into the game, different and more lucrative team-mates can be purchased, making the rewards even greater.

At the same time, if you go full out on the course, at the expense of others, by repeatedly nudging them this way and that, they can become a nemesis of yours in the race, and could potentially make thing a whole lot trickier for you. These additions are hardly game changers, but are undoubtedly welcome additions.

The one criticism that could be made about the game is it doesn’t exactly embrace the #MeToo culture. At the start of each race, a male and a female discuss what lies ahead, with the female – Kristen – usually offering her opinion. To skip the chat, you press A, which takes you to the start of the race, and therefore glosses over Kristen’s insights as to how it may play out. To rub it in, the male presenter announces, somewhat coldly, “Sorry Kristen, we don’t have time for that, the race is about to begin!”. Just to let you know Kristen, we’re totally on your side, and you can do so much better.

It’s that rare title that manages to hit that usually elusive sweet, sweet spot between being a racing sim and arcade title, making it both balanced and fun.

Along with the usual online shenanigans, GRID is about as comprehensive a racer you can get. It doesn’t pander to any current trends or whims, or feel it has to go large on personality with silly extras, instead it just concentrates on the experience behind the wheel, making it the perfect drive for any gaming petrol head.