It’s clear to all what we will be driving in the future – nothing. We will undoubtedly be driven around by self-driving vehicles, all of which with the voice chip of KITT built in.

After that, there will be no vehicles at all, as teleportation will be readily available and we will be able to beam here, there and everywhere. And if you think we’ve got an obesity problem now, just wait ‘til we’re beaming everywhere.

The guys over at Wired Productions have decided to not look quite that far ahead for their latest title. Grip: Combat Racing will have you firmly behind the wheel, driving up the wall, in a very good way.

You see the future they portray is one where cars have the ability to not only drive on roads, but on walls and ceilings too. Obviously this would be great if you had the only car that could do this, particularly during the rush hour, but unfortunately all cars now have that ability, which means it’s dangerous out there. 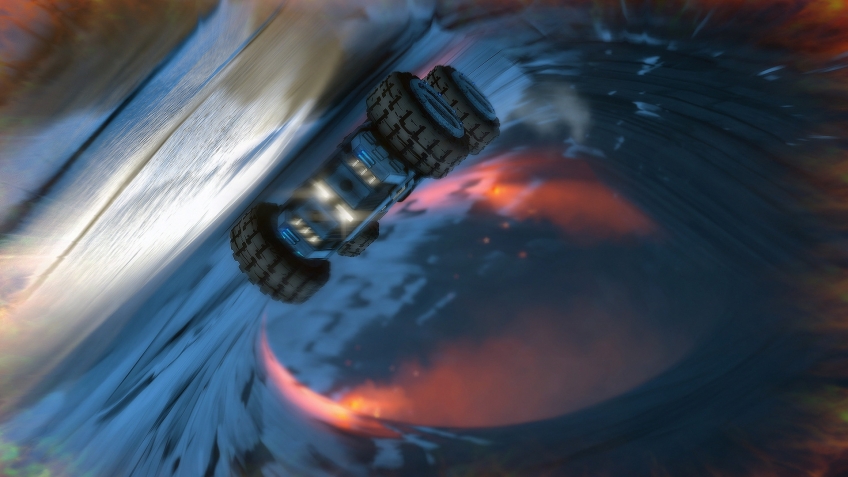 Wo-oh what a feel-ing, when you're driving on the ceiling...

Thankfully, these upside downy cars of the future have also been equipped to handle bad drivers, by having some hardcore weaponry on board. Don’t like the way the car in front cut you up? Use the targeting missile system to make them aware of your disapproval. Feel the car in front is driving too slow? Incentivise them to increase their speed by rattling off some machine gun fire. You get the picture.

All of which takes place to the soundtrack of some banging techno beats. It would be a fair description then to label this as Wipeout on wheels. Although the tunes are suitably futuristic, it would have been nice to be able to select different stations to suit your mood; some heavy metal perhaps, then a little Fleetwood Mac for the final stretch home.

Then you have the racing itself, which has to be said is fast and furious fun. As well as various weapons to pick up, there are also speed ramps to pass over, which, surprise surprise, make your vehicle go that bit faster for a short burst. And you really feel the adrenaline build, as you barely control your speeding car.

The fact that you can, at times, drive up walls as well as on the ceilings, is refreshing. That’s not to say that it doesn’t come with its own share of obstacles mind, so it pays to get to know each track as best you can, including the short cuts, which there are many of, scattered around each track.

At first it feels like you can just go flat out, without consequences, or indeed, using the brakes, but later levels, or tiers as they’re known here, ramp up the difficulty, so putting the pedal to the metal isn’t always going to pay off.

Another thing that won’t always pay off is the use of weapons. Quite often it can be detrimental, as the car you have destroyed seems to end up in your path and therefore stopping you progressing, which kind of defeats the purpose of having them. So use them wisely. It’s also a little disappointing that you can’t use weapons behind you, having to always shoot ahead. 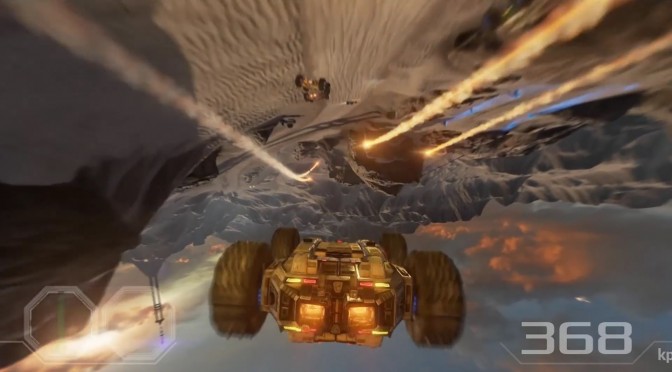 That bloody Sat-Nav has us soaring through the air again!

In an attempt to give the game a little more depth, also included are death matches. We’ve never really been fans of this mode of tirelessly driving around in an arena blindly shooting anything that comes near us, and there’s nothing here to change our minds, but if you like that kind of thing, you’re in luck.

There is also little in the way of upgrading your vehicles. You can spend a lot of time getting just the right colour for it, but that’s about it. You can change the tires though, but they don’t actually appear to change the way the vehicle handles, oddly.

These are just niggles however, as the overall experience is an enjoyable one. This title takes a stale genre and flips the average racer on its head – again and again and again.

If you love your racing games, this has immediate pick up and play appeal. It will take some time to master however, so don’t expect that just because you’re in the lead, it will stay that way for long.

Roads? Where you’re going you don’t need roads, when walls and ceilings will do just fine.